Nagaenthran’s remains arrive late in Ipoh, as family slams Singapore’s prosecution for caring more about collaborators than his appeal

Family and friends of Nagaenthiran Dharmalingam, who was executed for drug trafficking in Singapore, gather for funeral prayers at his family home in Ipoh April 28, 2022. — Picture by Farhan Najib
Follow us on Instagram, subscribe to our Telegram channel and browser alerts for the latest news you need to know.
By JOHN BUNYAN

IPOH, April 28 — It was a sombre mood last night at the family home of Nagaenthran Dharmalingam, 34, who was executed for drug trafficking in Singapore earlier yesterday despite multiple appeals for being intellectually disabled.

Around 50 family members and friends were left waiting in front of the single-storey terrace house located in a residential area in Tanjung Rambutan here, with a tent erected along with plastic chairs and tables to house them.

His remains — originally scheduled to arrive before midnight — were delayed due to heavy rains and traffic in Johor Baru.

A banner was held under the tent with the face of Nagaenthran, saying: “RIP In loving memory. We miss you Boy Anne.”

The family were still reeling from dissatisfaction, as they felt that their appeal against Nagaenthran’s conviction and sentence was not rightfully heard.

The deceased’s sister, Sarmila Dharmalingam, 36, told the press here that the Singaporean public prosecutor was more concerned with questioning how their mother was able to file a last-ditch appeal that was heard only a day before the execution.

“We are not satisfied with this matter,” she told reporters who were present at the home here, adding that they were similarly frustrated with the proceedings on the case. 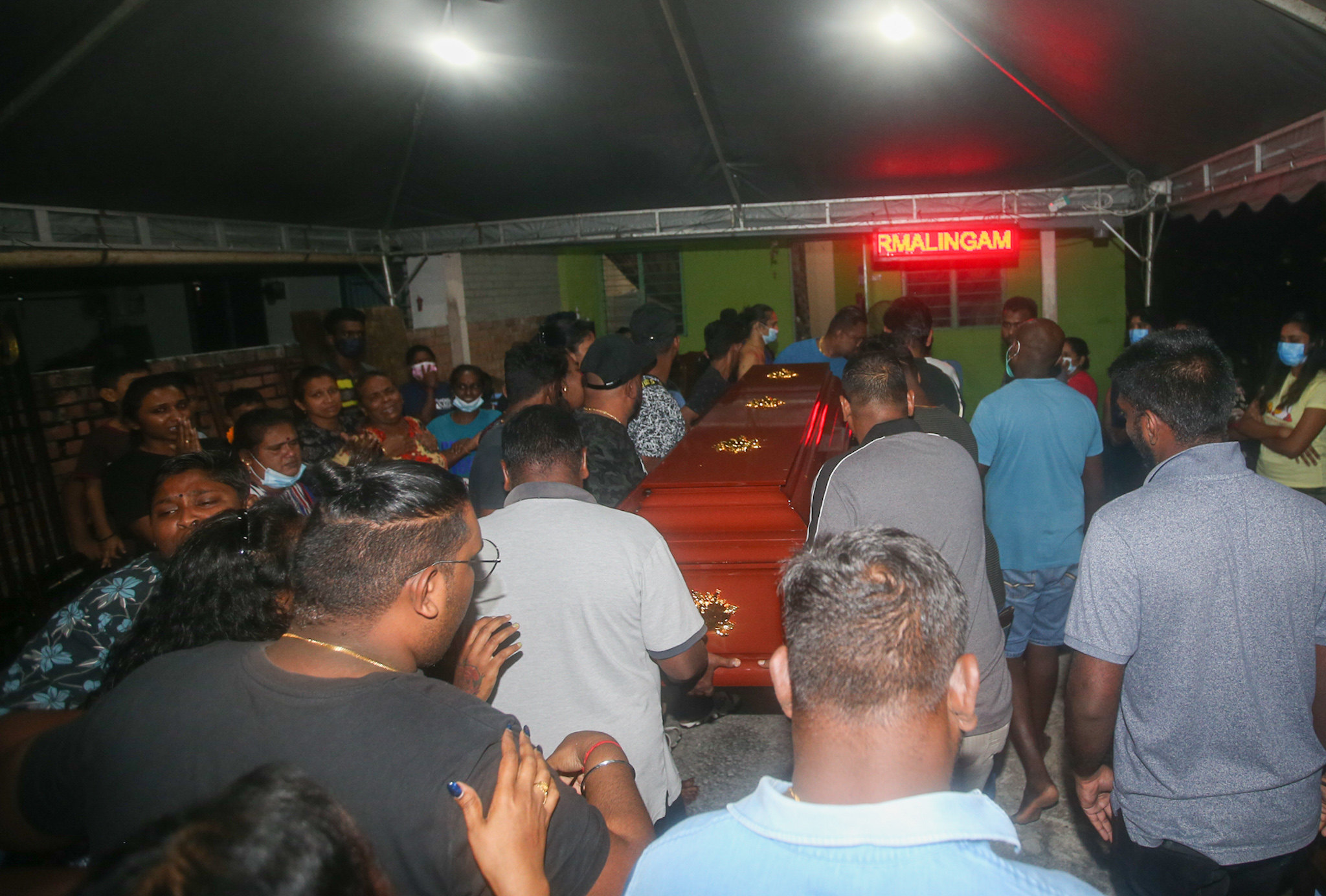 On Monday, Nagaenthran’s mother Panchalai Supermaniam, 60, managed to file a legal challenge to appeal her son’s conviction and death sentence at the republic’s Court of Appeal on the eve of the execution.

According to human rights legal group Lawyers for Liberty, Panchalai was unable to find any legal counsel and had to file the appeal with help from friends.

However, the court dismissed the motion on Tuesday, describing it as "frivolous".

Sarmila said she had met his brother last on Sunday, recalling that he had become more humble after serving years in Singaporean prison.

“The atmosphere was totally different. We were sad when we met him and talked some personal matters.

“We also bought him some clothes which he wore during the photoshoot before the execution. The clothes are still with us now and we can still feel his smell on the clothes,” she said.

On Twitter, Singaporean journalist and activist Kirsten Han had shared the photo from that shoot, showing Nagaenthran’s favourite clothes: a dark Fred Perry polo shirt, medium-wash blue jeans and sneakers. He was bald, sitting on a stool posing without much expression.

Before an execution, family members are allowed to buy clothes for the prisoner to wear at a photo shoot. The photos are given to the family shortly before, or after execution.

Navin says this was Nagen’s favourite outfit and photo. pic.twitter.com/wYXfqinIIn

His lawyers and activists said Nagaenthran’s IQ was found to be at 69, a level recognised as an intellectual disability. However, the courts determined he knew what he was doing at the time of his crime, and ruled there was no admissible evidence showing any decline in his mental condition.

The Singapore government says the death penalty is a deterrent against drug trafficking and most of its citizens support capital punishment.

Last night, Sarmila also thanked the Malaysian and Singaporean citizens who had been supporting and praying for the family throughout Nagaenthran’s case over the last decade.

Nagaenthran was sentenced to death in 2010 for trafficking 42.72g of heroin in 2009 into Singapore, which is known to be among the countries with the strictest narcotics laws in the world.

Hundreds of Malaysians and Singaporeans held candlelight vigils in support of Nagaenthran at Hong Lim Park there on Monday night, and Tuesday night in front of the Singapore High Commission in Kuala Lumpur. 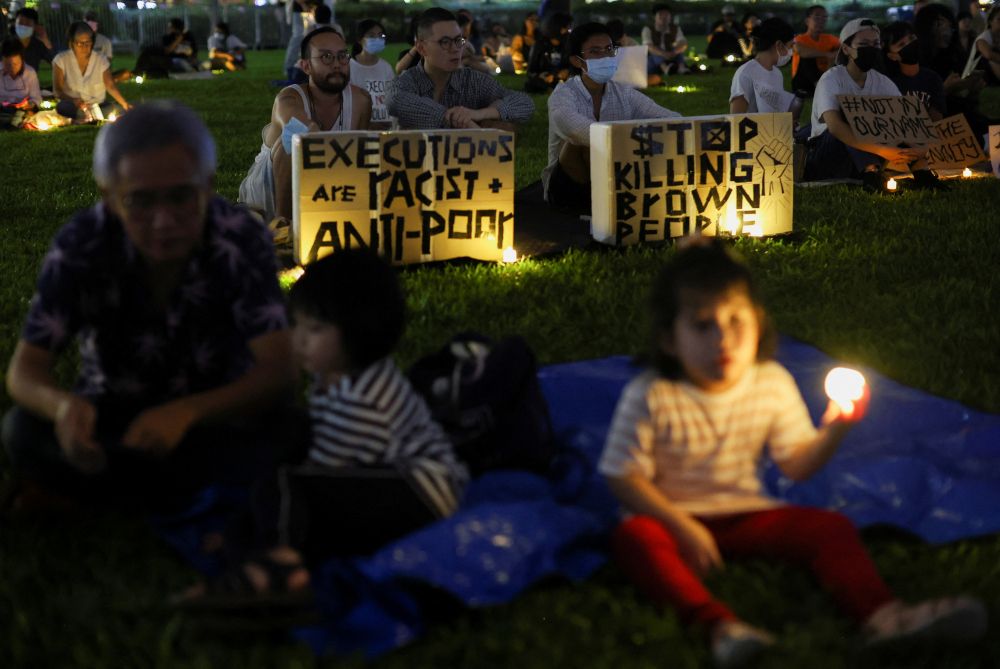 People take part in a vigil ahead of the planned executions of Malaysians Nagaenthran Dharmalingam and Datchinamurthy Kataiah at Hong Lim Park in Singapore, April 25, 2022. — Reuters pic

The rest of the family did not wish to speak to the media, especially his mother, who was visibly sorrowful.

A few family members and friends gathered at their house last night as they waited for the Nagaenthran’s remains to return so he can be laid to rest.

“The remains of Nagaenthran should have arrived at 11pm, but it has been delayed due to heavy rain and jam,” said Sarmila.

Nagaenthran’s remains will be cremated at the Buntong Crematorium centre on Friday afternoon.

Another Malaysian, Datchinamurthy Kataiah, is also on death row in Singapore after being convicted of trafficking 45g of diamorphine. He has filed an appeal to stay the execution which is set to be heard this morning.