Monkeypox virus: Govt has no plans to close country’s borders

'Tomorrow will be better': Shanghai inches towards Covid reopening

Sargunan Naidu Sundararaju, 42, has been having trouble finding more staff to cover the longer hours at his Sentul restaurant. ― Pictures by Devan Manuel
Follow us on Instagram, subscribe to our Telegram channel and browser alerts for the latest news you need to know.
By KEERTAN AYAMANY

KUALA LUMPUR, April 9 — For the last few months, it felt like every other restaurant or cafe was putting up “We are hiring” posts on their social media.

The repeated lockdowns and restrictions on dining-in throughout the past two years saw many kitchen and service staff laid off, and now they are unwilling to come back despite business picking back up.

Proprietors of food and beverage (F&B) businesses say these former workers have taken up new jobs — either as delivery riders or running their own small food stalls — and are discouraged from returning due to the lack of security in the industry.

A recent report by Bernama wrote that Mamak restaurants which used to operate 24 hours before the pandemic are unable to operate such hours even though they are now allowed to do so.

Datuk Jawahar Ali Taib Khan, president of the Malaysian Muslim Restaurant Owners Association (Presma), was quoted only 25 per cent of the 9,000 Presma members nationwide were able to operate 24 hours.

“Only those with passion for the F&B line are still working [in it],” said Sargunan Naidu Sundararaju, 42.

Sargunan is the executive chef of Fika Fine Kitchen & Bar, an eatery that opened in Sentul last year. Since then he has struggled to expand his current four-person staff.

“Here sometimes we have to work 12- or even 16-hour shifts. Compared to that, doing Grab, they can make RM2,500 to RM3,000 a month, work following their own time, and get time to spend with family,” he told Malay Mail.

He lamented that Fika Fine had originally wanted to open from 7am to 12am, but due to the lack of workers they had to open from 2pm instead as they had slightly more customers towards the evening.

“We noticed that often when going to the Sentul market nearby, husbands would park here in the morning and wait in their cars.

“In fact I myself do that. I will let my wife go to the market and I’ll be waiting here an hour plus, and I don’t know what to do.

“So we wanted to open a place where they could have breakfast,” said Sargunan.

“Every week we are advertising on all our social media and on Malaysian chef associations and hotel associations, we are still trying.

“We are getting like two or three responses a month, that also they say ‘Oh Sentul is too far for me’, even though we provide a hostel just across the road,” he added.

Alvin Tan, 41, owner of KoffeHolics in Mutiara Damansara, said using the government’s MYFutureJobs portal has not helped either as there was a “mismatch” between shortlisted candidates and the business’ requirements.

“I got one or two applications, but they don’t live nearby. We open in early mornings [7.30am] and when the person lives far away, it just doesn’t work,” he said.

He added that although he’s increased his wage offer for operations crew several times — from RM1,500 pre-pandemic, to now RM1,800 onwards for those with some experience — there were still no takers.

“A lot of the workforce was put off by the insecurities of the past 24 months — lockdown, reopen, repeat,” he told Malay Mail. 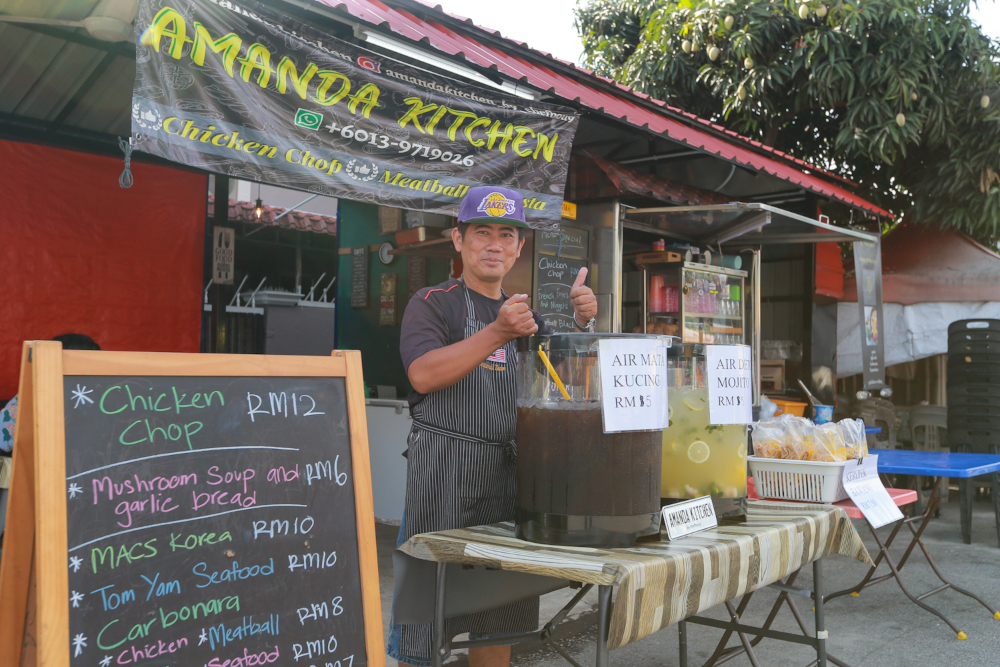 Sharusmizal bin Mohamed Salleh, 47, prefers to run his own stall instead of returning to work in hotel kitchens or large restaurants.

Sharusmizal Mohamed Salleh, 47, the former head chef of the Urban Restaurant at Hotel Istana Kuala Lumpur is one of those who has pivoted out of large F&B establishments.

After the hotel closed its doors permanently — a casualty of the pandemic — last year Sharusmizal who is known by his peers as Chef Buoy decided to open a small stall near his home in September.

“I have been getting job offers but I’m not going to return until I know that business has truly picked back up, that there are a lot of tourists again,” he said.

Sharusmizal was part of the team that represented Malaysia at the international IKA Culinary Olympics in 2020, and under his guidance, Urban Restaurant won Tatler Malaysia’s “Best Restaurants” award consecutively from 2011 to 2014.

He now uses his skills to serve affordable but delicious meals to his neighbours and other visitors to his stall — Amanda Kitchen.

Shahrusmizal’s childhood friend, Shaiful Rizal Abu Saman, 46, who helps run the stall is also an industry veteran with 27 years of experience, and used to work in the kitchens of Westin Desaru Coast Resort.

“I left in 2020 because it was so difficult for me to come back and see my family in KL. The only thing that would make me go back is if the pandemic is really gone, so I know I won’t have to face the same thing again.

“Besides, the pay that some of these jobs are offering are also below the pre-pandemic rate,” he said.

This labour supply crunch has crippled many industries — including F&B — that are trying to bounce back, especially as the entry of foreign workers had been curtailed the past two years because of the pandemic.

The government has since reallowed the bringing in of foreign workers but the approval process has a long waitlist with certain industries such as manufacturing being prioritised.

Shaiful Rizal Abu Saman, 46, who helps run Amanda Kitchen says he won’t work in another state until the pandemic is over.