Barisan Nasional supporters celebrate a win for the coalition during the Melaka state election vote count at Dewan Seri Chendana, Ayer Keroh November 20, 2021. ― Picture by Ahmad Zamzahuri
Follow us on Instagram, subscribe to our Telegram channel and browser alerts for the latest news you need to know.
By KENNETH TEE

They are Taboh Naning, Ayer Limau and Tanjung Bidara.

According to the EC, BN’s Datuk Seri Ab Rauf Yusoh trumped PN’s Datuk Mas Ermieyati Samsudin with a thin majority of 364 votes in the hot seat of Tanjung Bidara.

BN will later go on to win a total of 21 seats out of the 28 it contested, seizing a two-thirds majority in the state assembly to form the next state government following an official announcement by the EC.

MCA won two seats while MIC won one after having been wiped out in GE14.

Runner-up PH only managed to garner five seats — four from DAP and one from Parti Amanah Negara where its chief minister candidate Adly Zahari was defending.

PKR lost in all 11 constituencies that it contested this time around, leaving the party with zero representation in the state assembly.

The state polls were called following the dissolution of the Melaka state legislative assembly on October 4 when four of the assemblymen withdrew their support for the leadership of chief minister Sulaiman. 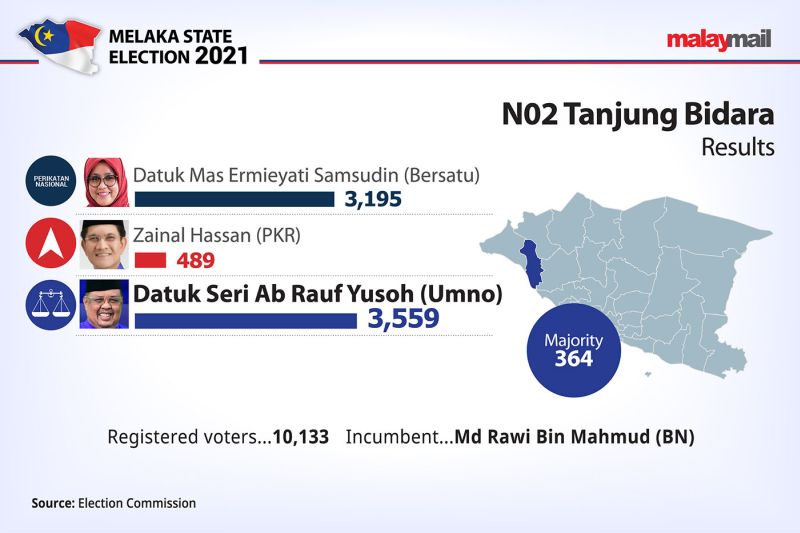