KUALA LUMPUR, Oct 21 — The High Court here today has allowed the application by the prosecution in Datin Seri Rosmah Mansor’s corruption case for her to be impeached over an allegedly contradictory statement.

Prior to today’s hearing, the prosecution had applied to the court to cross-examine Rosmah over her alleged contradictory statement that she had made to the Malaysian Anti-Corruption Commission (MACC) in relation to a money-laundering investigation under the Anti-Money Laundering, Anti-Terrorism Financing and Proceeds of Unlawful Activities (AMLA) Act 2001.

In his ruling, High Court Judge Mohamed Zaini Mazlan said Rosmah’s statement to the MACC was admissible as evidence and can be used by the prosecution to impeach the accused.

“The pertinent issue is whether the accused statement is made under Section 32 of the AMLA Act 2001 — whether it can be admitted as evidence and subsequently used by the prosecution to impeach her.

“I am of the view that the statement is admissible pursuant to Section 40 of the same Act, and that the prosecution could proceed with its attempt to impeach the accused.

“I am however of the belief that the provision for impeachment is to be carried out under Sec 145 and 155 of the Evidence Act 1950, and not Section 72 of the AMLA Act, as the latter pertains to a trial of an offence under the Act, which is not the case here,” he said.

Concurrently, Rosmah is also charged with 17 charges of money laundering under the AMLA Act, with over RM7.1 million allegedly transferred to her personal bank account between 2013 and 2017.

The prosecution had also applied to question Rosmah’s character, particularly on her AMLA charges and personal bank statements, to show inconsistencies in her evidence in this trial.

In this application, Zaini also allowed the prosecution to cross-examine Rosmah on her character; however, confined the line of questioning to not include case facts in her AMLA charges, such as her bank statements and alleged deposits made by one Roslan Suhari into her bank account to prevent prejudice.

Zaini is also the presiding judge for Rosmah’s money-laundering trial.

In this trial, Rosmah is accused of soliciting RM187.5 million in bribes from Jepak Holdings Managing Director Saidi Abang Samsudin, of accepting a RM1.5 million bribe directly from him and a separate RM5 million bribe via her former aide, Datuk Rizal Mansor, in exchange for helping Jepak Holdings win a RM1.25 billion solar energy project from the Education Ministry. 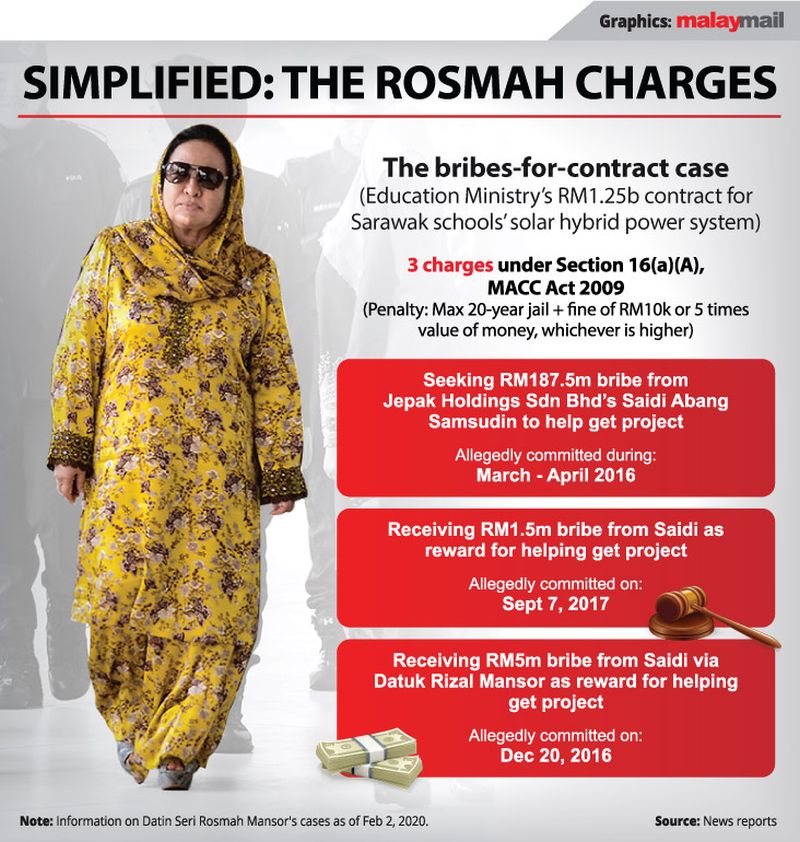