Its director-general Tan Sri Dr Noor Hisham Abdullah said this brings the total number of confirmed infections in the country to 1,113,272 since the start of the pandemic.

“Currently, there are 189,609 active cases in the country. Similarly, the ministry has also detected the emergence of 28 new Covid-19 clusters in Malaysia today.

“This brings the total number of clusters detected to 3,679, of which 2,573 have been deemed to have ended, leaving 1,106 clusters still active,” Dr Noor Hisham said.

The 28 clusters include 13 workplace-related clusters, 12 community clusters, and one religious cluster, one high-risk group cluster, and one detention centre cluster.

“Similarly, 1,062 cases are being treated in Intensive Care Units, of which 534 require breathing assistance. A total of 165 deaths from Covid-19 were also recorded, bringing the nationwide fatality rate to 9,024 cases, or 0.81 per cent of the cumulative number of cases,” he said.

The deceased include 155 Malaysians and 10 foreign citizens. Of this number, 52 were in Selangor, 30 in Johor, 23 in Negri Sembilan, 18 in Kedah, nine in Sabah and KL Federal Territory respectively, seven in Penang, four in Melaka, three in Perak, Terengganu, and Sarawak respectively, two in Pahang, and one in Kelantan and Perlis respectively. 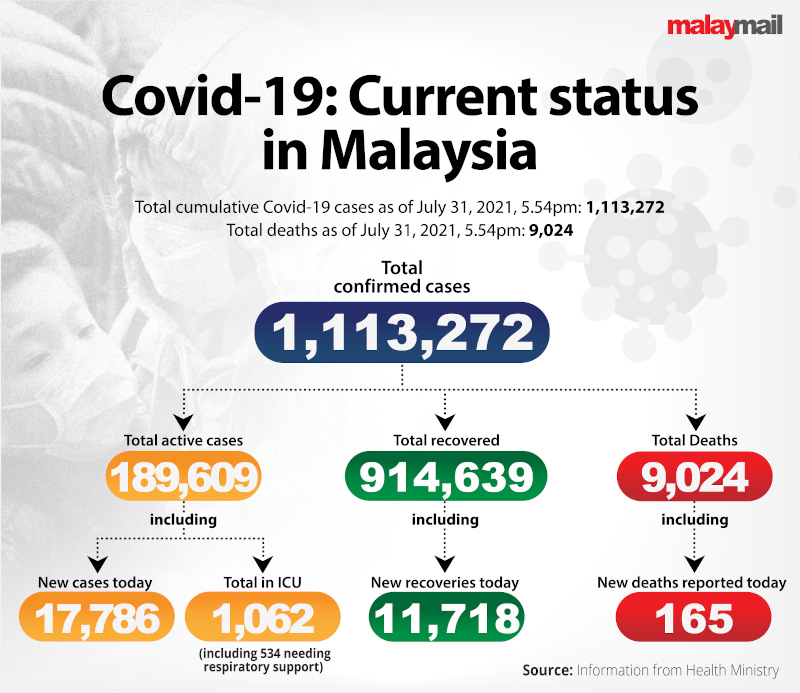