KUALA LUMPUR, Feb 3 — Malaysia climbed in 2020 to its best-ever placing in a global democracy index, reaching the 39th spot out of 167 countries even though there has been less political stability since Tun Dr Mahathir Mohamad’s resignation in February last year.

As for Malaysia’s overall score based on five categories, the country improved slightly to 7.19 points in 2020, up from its previous best score of 7.16 in 2019. The total maximum score that can be obtained in the index is 10.00.

The 7.19 overall score is Malaysia’s new best record since the Democracy Index started in 2006.

In zooming in on South-east Asia, the EIU noted that Thailand’s score in the democracy index regressed in 2020, following the latter’s treatment of the opposition there and curbs on freedom of expression and on the media after the 2019 general election there, including the arrest of protesters that were seeking Parliament dissolution and a new and more democratic constitution.

The EIU then compared the situation in Thailand to Malaysia’s own situation.

"By contrast, political stability in Malaysia has deteriorated since the departure of Mahathir Mohamad as prime minister in March 2020.

The EIU democracy index is based on five categories of electoral process and pluralism; civil liberties; the functioning of government; political participation; and political culture.

While the EIU did not mention where Malaysia improved in terms of electoral process and pluralism, the results showed Malaysia as gaining the highest points in this category at 9.58 points as compared to the points the country was given in other categories.

Under this category, 12 questions are considered, including whether there are free and fair elections at the national level and municipal level, whether citizens can cast their vote free from threats to their security, whether there are laws providing for broadly equal campaigning opportunities, and whether the process of funding political parties are transparent.

Also considered are whether there are clear constitutional mechanisms for orderly transfer of power between governments after elections, whether citizens are free to form political parties that are independent of the government and whether they are free to form political and civic organisations free of interference and surveillance from the government, whether opposition parties have a realistic prospect of achieving government, and whether potential access to public office is open to all citizens.

Within the Asia and Australasia 2020 regional ranking, Malaysia ranks sixth out of 28 countries, putting it above countries such as Timor Leste, the Philippines, Indonesia, Thailand, Singapore, Cambodia, Myanmar, Vietnam and Laos.

While there were changes to 11 countries and territories’ categorisation in the 2020 index including Japan, South Korea, and Taiwan moving from “flawed democracy” to be known as “full democracies”, the rest of the countries in the index remained in their existing categories, including Malaysia in the “flawed democracy” category.

The two other categories after full democracies and flawed democracies are hybrid regimes and authoritarian regimes.

In the 2020 Democracy Index, 23 countries are full democracies, 52 are flawed democracies, 35 are hybrid regimes, while 57 are authoritarian regimes.

Flawed democracies are defined by the EIU as countries receiving scores above six but less than eight or equal to eight, with these countries having free and fair elections and respect for basic civil liberties even if there are problems such as infringements on media freedom, but with significant weaknesses in other aspects of democracy such as governance problems, underdeveloped political culture and low levels of political participation. 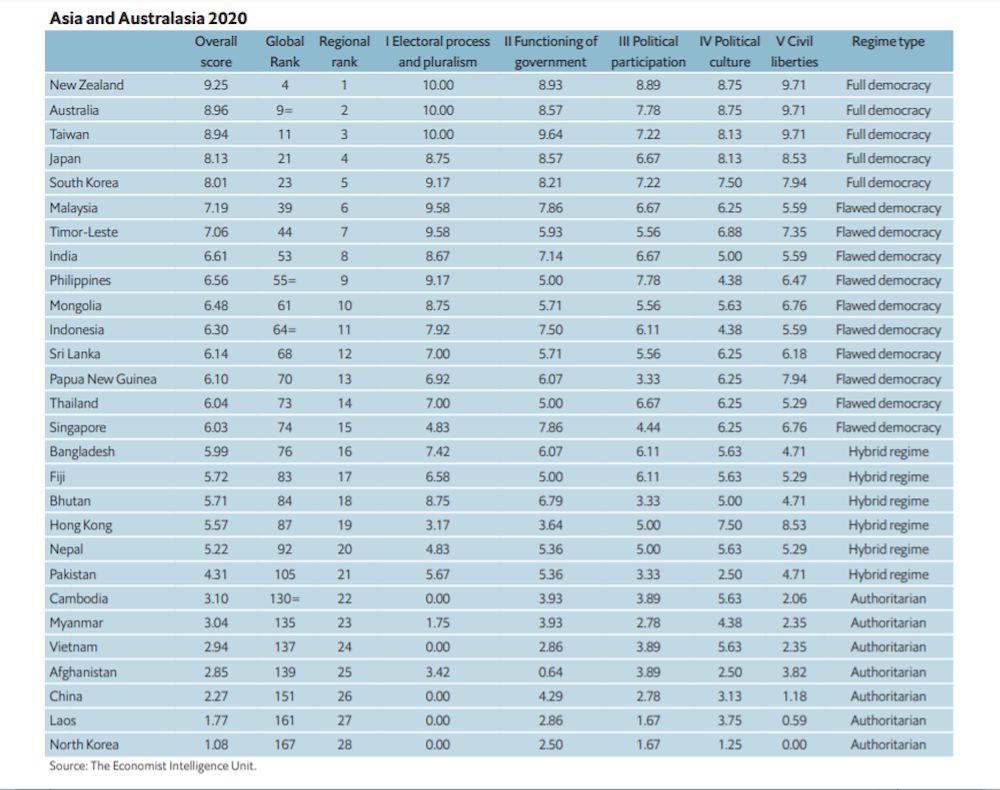