Local and imported frozen beef seller Zamry Shahbhari speaks to Malay Mail at his stall in the PJ Old Town market, December 31, 2020. ― Picture by Choo Choy May
Follow us on Instagram, subscribe to our Telegram channel and browser alerts for the latest news you need to know.
By R. LOHESWAR AND SHAHRIN AIZAT NOORSHAHRIZAM

KUALA LUMPUR, Jan 4 — The recent halal “meat cartel” scandal that blew up nationwide came as no surprise to many local butchers in Klang Valley recently polled by Malay Mail.

Speaking during our visit to wet markets, the butchers polled mostly said they have been suffering in silence for years knowing the existence of the purported cartel, and were left disappointed with the authorities’ lackadaisical attitude towards the syndicate.

Zamry Shahbhari, a butcher in the Petaling Jaya Old Town wet market, related that local butchers have been aware that there were companies bringing in more meat than they practically could, but said no action was taken despite them lodging complaints.

“I’m sorry to say but I feel what the government is doing right now to tackle this issue is a load of crap. I don’t want to mention which minister but we know who it is and they were doing a piss pot job of it.

“We’ve been hearing about this illegal meat trade for years and local breeders have made police reports but nothing came of them,” Zamry lamented.

“Instead we’re hearing about this company in Johor, Raihanah Cold Storage Sdn Bhd, and the husband and wife being charged for involvement in this illegal business. What’s the point? These are small fries, the bigger culprits are still out there,” he added.

Zambry was referring to a frozen meat supplier, whose directors were charged in the Johor Baru Sessions Court last week following the media exposé of a purported syndicate that repackaged non-halal meat with halal meat.

The accused Rahman Sheik Abdullah, 44, and his wife Raihanah Kasim, 42, pleaded not guilty, but they were merely charged with using a non-certified halal logo on the company truck.

When asked how the butchers became suspicious, Zamry said authorities only allow foreign companies to bring in a certain amount of frozen meat on a monthly basis — but the amount they brought it allegedly have always exceeded the amount approved by Islamic authorities which enforce the halal certification.

“Then suddenly we hear of this company bringing 50 to 70 containers per month to Malaysia for several months. This is way too many for one company. Usually it’s around 20 to 30 containers per month or less,” said Zamry, explaining that one container would contain the equivalent of one tonne of meat.

“I think we need to look at the Customs and Immigration departments, as well as other agencies involved more closely. Many butchers are not willing to talk for fear of repercussions but I feel this is an important issue and if it’s true you need not be afraid,” he said. 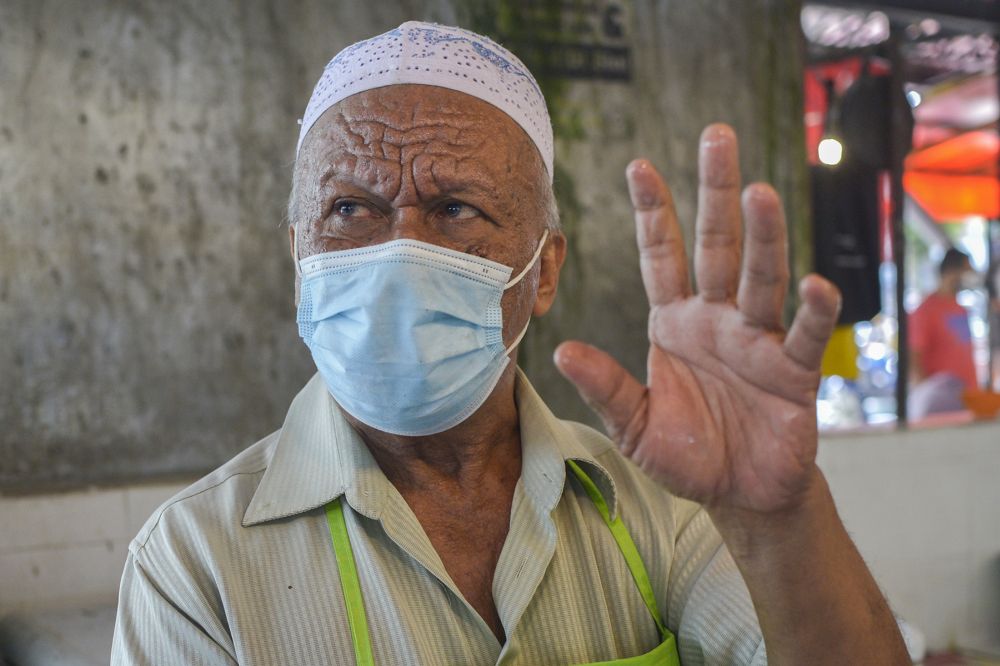 Sulong Mohd says corrupt officials and poor governance in government agencies have resulted in officers being corrupt for years. — Picture by Miera Zulyana

Another butcher located in Seksyen 16 Market in Shah Alam, Sulong Mohd, also lamented the fact that the possibility that the purported cartel has lasted for years meant that many of the corrupt staff involved from the authorities have likely been leading very comfortable lives with their ill-gotten gains.

“If they said that this meat cartel issue has been going on for 40 years, the officers involved probably have retired and are enjoying their life.

“They might have escaped this heresy, but we don’t know what’s going to happen in the afterlife,” he told Malay Mail when met.

Halal certification confirms that products have been prepared in accordance with Islamic law, and is a big deal for Muslims globally and in Malaysia, where they make up about 60 per cent of the population.

According to Bloomberg, the global halal-meat business is a US$2.3 trillion (RM9.3 trillion) market and Malaysia exports US$9 billion in halal-certified products including cosmetics and pharmaceutical products to China, Singapore, USA and Japan among others.

The meat cartel scandal became the talk of the town after the media broke news on the smuggling of frozen meat from China, Ukraine, Brazil and Argentina before repackaging said meat and assigning it the halal logo at a warehouse in Senai, Johor.

Inspector-General of Police Tan Sri Abdul Hamid Bador said the police have opened several investigation papers over the issue based on reports lodged by several individuals and non-governmental organisations. 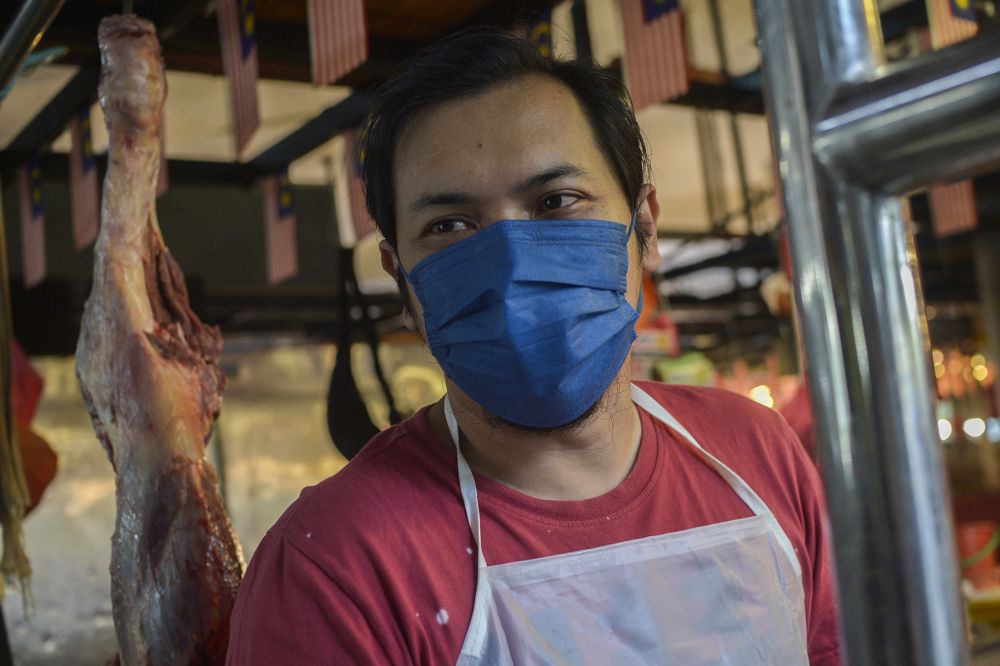 However, Abu Khan, another butcher also from the Shah Alam market said that no matter what, consumers will always tend to prefer frozen meat to fresh ones due to the cheaper cost.

“This is the reality, the one and only factor was corruption among government officials and lastly, the people are the ones who are going to pay for the price,” Abu said when met.

The disparity between local beef and cheap imports

Checks by Malay Mail found the prices of local fresh beef remains the same, even as the story of the scandal broke and many Malay-Muslim groups have urged adherents to stay away from frozen imported meat until this issue gets solved by authorities and religious bodies.

Butchers told Malay Mail that this was down to price regulation, and the simple fact that butchers are not able to simply raise prices as local meat is already more expensive than imported meat.

Tenderloin from local beef goes for between RM43 and 48 per kg, compared to RM38 for imported ones. A kilogramme of topside, knuckle or rump goes for around RM40, while the imported meat costs RM28 per kg.

Minced or ground up meat is around RM35 per kg locally compared to RM24 for the imported meat.

Other meat cuts like the hoof, leg as well as innards like hearts, lungs and spleen have about RM1 to 5 differences between the local and imported meats. 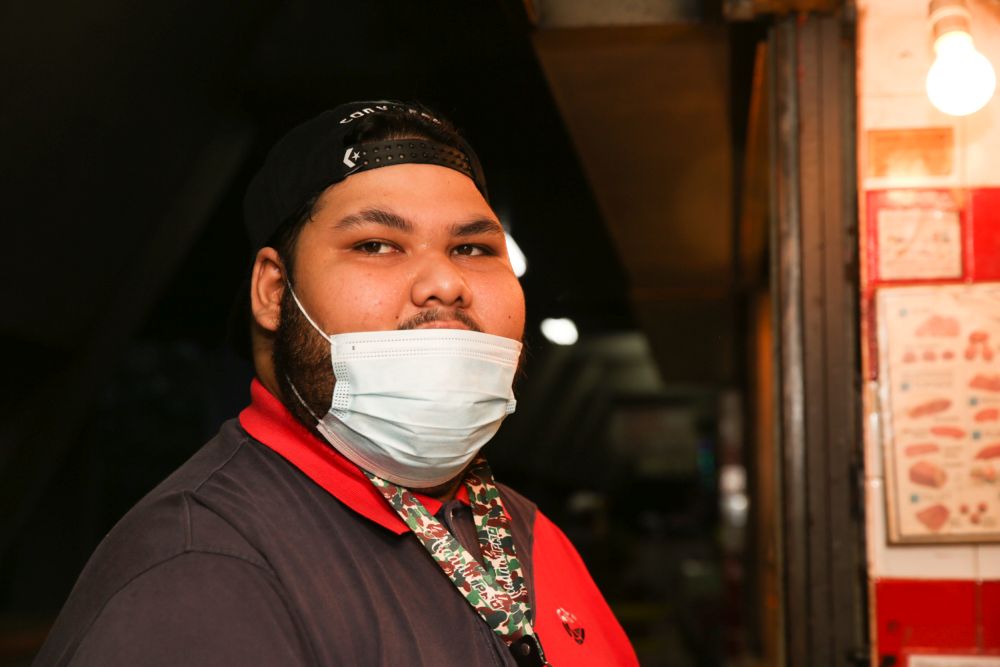 Khairul Majid says he sees no increase in customers despite the meat cartel scandal. — Picture by Choo Choy May

“These price differences when added up for bulk purchases makes a lot of difference that’s the reason for businesses purchasing frozen meats from overseas,” said Khairul Majid, a butcher at Taman Tun Dr Ismail wet market.

“Plus this time of the year is the slow time. Not a lot of festivities and we do not see a stark increase in customers despite this scandal gripping the country. People are struggling economically too, so many aren’t eating meat on a daily basis.”

The government has not stopped the import of beef to the country while it is investigating the scandal. Instead, Deputy Minister of Domestic Trade and Consumer Affairs Datuk Rosol Wahid has even vouched for the top three frozen meat brands: Allana, Amroon, and Al-Aali — all from India.

When asked if there would be any shortage of halal beef following the scandal, one butcher who wished to be known as Ah Keong said the possibility will only be known in the next two weeks. 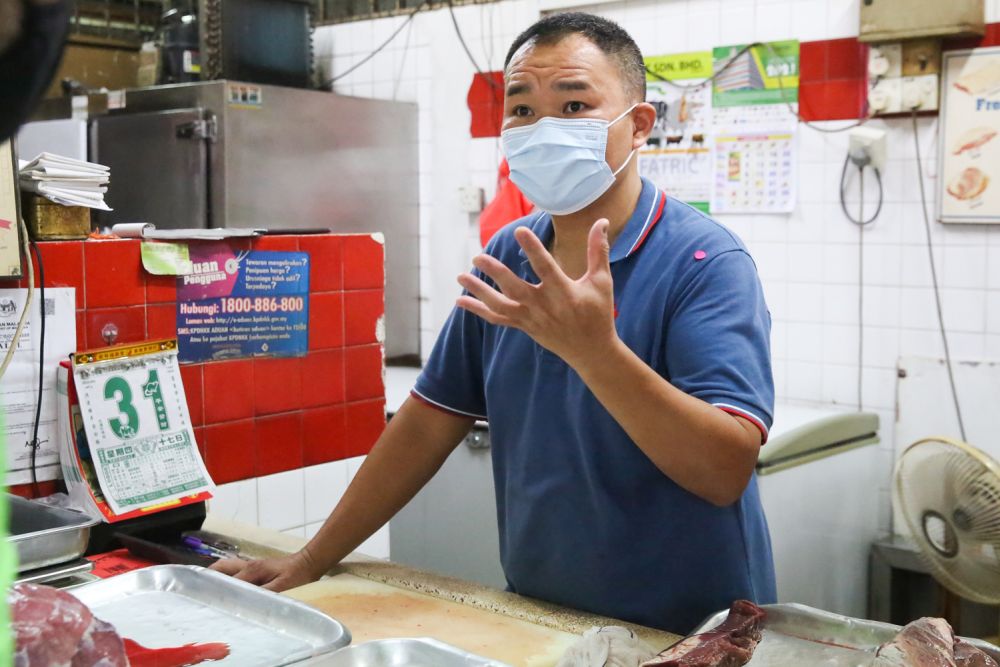 Butcher Ah Keong says if there is a shortage of halal meat, it will be known in a couple of weeks. — Picture by Choo Choy May

“I haven’t ordered my stock today so I don’t know what the situation is yet. But if there is a shortage we will know in two weeks.

“The main warehouse can store meats for up to two months so for now I believe things are still okay,” said Ah Keong.

Religious affairs minister Datuk Zulkifli Mohamad had last week said that the government will now meet with industry players involved in the importation of meat and slaughtering of animals to ensure they understand the set guidelines.

The senator said this was also to ensure a high level of compliance with the guidelines and integrity of the industry players.