A general view of the funicular railway station at the top of Penang Hill October 2, 2020. — Pictures by KE Ooi
Follow us on Instagram, subscribe to our Telegram channel and browser alerts for the latest news you need to know.
By OPALYN MOK

GEORGE TOWN, Oct 5 — Penang has finally submitted its dossier to Unesco in its application to get Penang Hill Biosphere Reserve recognition after years of research and compiling documentations for submission.

He said it took four long years of collaboration with various state and federal government agencies, bodies, The Habitat Foundation, private institutions and non-governmental organisations to complete the dossier for submission.

“The biosphere reserve covers a total land area of 12,681 hectares which is about 25 per cent of Penang island,” Cheok said during an interview with Malay Mail.

He said this meant that the biosphere reserve will be jointly managed by various state and federal agencies including the Department of Wildlife and National Parks Peninsular Malaysia (Perhilitan), the Forestry Department, Penang Botanic Gardens and PHC.

“PHC will be the catalyst to work with different government agencies and to facilitate various activities and programmes if we are successful in our application,” he said. Various types of fauna, such as the dusky leaf monkey, can be seen at the Penang Hill October 2, 2020.

There will be a transition zone between the core zone and buffer zone which covers mostly the water catchment areas and about 80 per cent of the area is private lands.

Cheok said if Unesco was to approve the biosphere reserves listing, it would spur an interest in Penang Hill and create awareness on the importance of protecting the biodiversity of the hill and its surrounding areas.

“We will not be building theme parks or turning Penang Hill into Disneyland, what we want is sustainable activities and to promote eco-tourism,” he said.

The recognition will also mean that Penang island will have two Unesco sites, the George Town world heritage site and Penang Hill.

“We can work together to enhance the image and status of Penang island as Unesco sites,” he said.

GTWHI general manager Ang Ming Chee said George Town is closely linked to Penang Hill as during the colonial era, the British had set up summer homes on the hill.

Ang said the recognition is important as it will allow the state government to put in place a mechanism to protect the site, much like how George Town was protected due to its Unesco listing.

She stressed that Unesco has never stopped tourism activities within Unesco sites as the human component of spurring economic activities in these sites are also important to maintain the sites.

“Unesco recognises the need for development, we only need to make sure it is sustainable with rules and check and balance,” she said.

She said a second Unesco listing for Penang will not only spur more tourism to the island state but also increase economic activities which will help the local communities.

“Locals will then be proud of our own culture and identity,” she said. The total area of Penang Hill is approximately 12,481 hectares.

The idea to nominate Penang Hill as a Unesco biosphere reserve was first mooted back in 2016 when the first Bioblitz programme was held at The Habitat together with researchers from Universiti Sains Malaysia (USM) on the hill.

The Habitat Managing Director Allen Tan said the Bioblitz programme was a research programme where 117 scientists from USM and all the world converged at The Habitat for two weeks to collect data on the biodiversity of the hill.

“We first broached the idea in 2016 after the programme and it was immediately picked up by the state and PHC had worked hard to push for it,” he said, adding that USM had also contributed in terms of collecting the biodiversity data needed for the application.

Now, The Habitat is working closely with PHC to rehabilitate Fernhill, one of the heritage bungalows on the hill, to be turned into a rainforest research centre in preparation for the listing.

He said Penang Hill can be a hub of biodiversity and rainforest research and the centre can be used by visiting scientists and researchers.

He said if Penang was to get the biosphere reserves recognition, it can create another economic sector for the state.

“It can create an economy centred on scientific research where we can bring scientists and researchers here at their own expenses to conduct tropical rainforest research,” he said.

He said the state can organise more scientific expositions and research programmes to attract scientists from all over the world.

Malaysia only has two Unesco biosphere reserves listed, Tasik Chini which received the recognition in 2009 and Crocker Range in Sabah which received it in 2014.

According to the Unesco site, some of the main characteristics of biosphere reserves include achieving interconnected functions of conservation, development and logistic support, putting in place appropriate zoning schemes, focusing on multi-stakeholder approach with emphasis on involvement of local communities, integrating cultural and biological diversity, demonstrating sound sustainable development practices and policies and acting as sites of excellence for education and training. 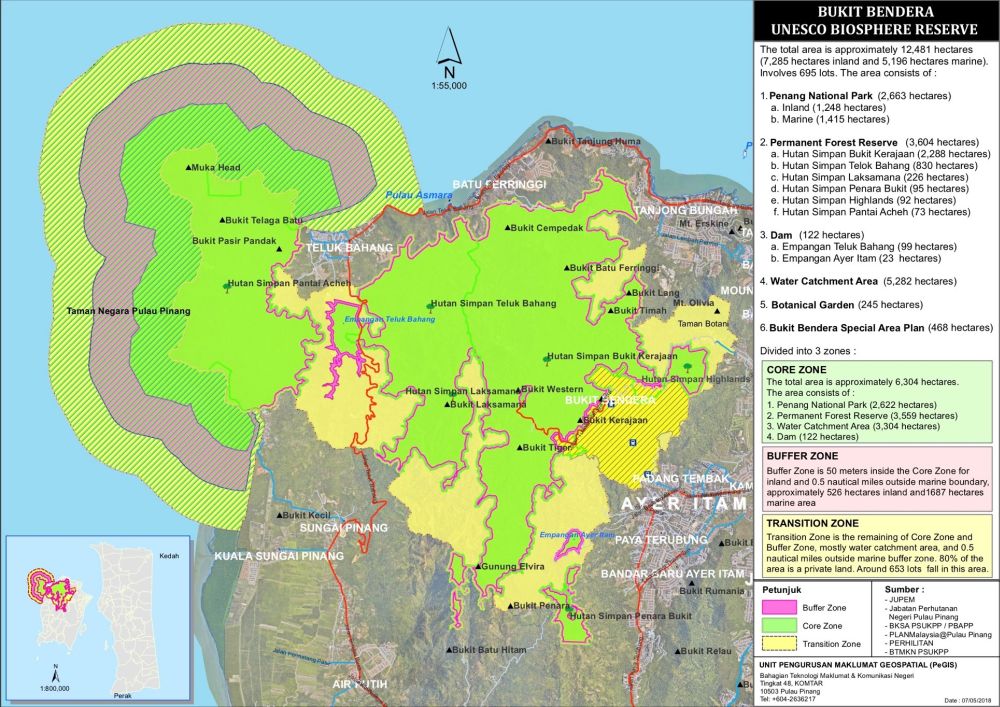 A map of the Penang Hill Biosphere Reserve.