In March, the state government’s development arm known as Perbadanan Kemajuan Pertanian Negeri Pahang (PKPP) signed two agreements with a conglomerate called the Royal Pahang Durian Group (RPD) for its entry into large-scale durian production that also empowered it to engage legally with the farmers in Raub. — Picture by Firdaus Latif
Follow us on Instagram, subscribe to our Telegram channel and browser alerts for the latest news you need to know.

KUALA LUMPUR, Sept 1 — A thorny affair is brewing in the High Court pitting a group of farmers in the Raub district of Pahang against the state government that could have serious effects on Malaysia’s Musang King durian industry.

At the heart of the court case is a bitter land dispute between the farmers and the state.

The durian growers are asking the courts to review their eviction from their farms where they have been cultivating the golden, pungent fruit for over a decade.

To the farmers, losing their farms would be a loss to the source of their livelihood. But to the government, the farmers had encroached upon some 7,000 acres of land that is not theirs but rather owned by the state, and to which they have a legal right to take back for government use.

While the hearing for the farmers’ bid for judicial review is set for October 28, here’s what we know about the case so far.

The state players ― An alphabet soup of companies

In March, the state government’s development arm known as Perbadanan Kemajuan Pertanian Negeri Pahang (PKPP) signed two agreements with a conglomerate called the Royal Pahang Durian Group (RPD) for its entry into large-scale durian production that also empowered it to engage legally with the farmers in Raub.

RPD is a group of companies said to be linked with Pahang royalty.

From reports and statements issued, the first entity RPDP-PKPP is to invest some RM40 million to build and operate a durian processing facility in Raub, slated for completion by June 2021.

Under the agreement, the second entity RPDR-PKPP is reportedly involved in the legalisation scheme of state land in Raub that had allegedly been encroached by local farmers.

On June 24, the Pahang government awarded RPDR-PKPP the lease and rights to use 5,357 acres of land in Raub for 30 plus 30 years.

To RPD Group and PKPP, the land they were granted had been illegally occupied by the local farmers for various crops, including the highly sought after durians.

The catalyst for the court case

A month later on July 24, durian farmers in Raub received a red notice from the district land office ordering them to vacate their farms cultivated on state land within 30 days, failing which they would be evicted.

Following that, the affected farmers organised themselves into a group dubbed the Save Musang King Alliance (Samka) and claimed they were being driven into a situation they described as “modern slavery” through a legalisation scheme of their farms and the literal fruits of their labour.

Samka claims Raub farmers have been applying for land titles through the proper channels that will allow them to continue farming lawfully, but have been repeatedly rejected by the state government.

The farmers’ group went public with a statement on August 20 detailing the alleged contract in which they claimed they were required to pay a levy of RM6,000 per acre ― which they said contains about 30 mature durian trees ― for this year.

According to Samka, this translates to a levy of RM60,000 for a durian farmer with 10 acres of land and an additional levy of up to RM20,000 per acre based on the durians produced on that plot, payable to RPD.

Samka claimed this was unfair to them as the state government is already imposing a levy of RM50 per acre.

Samka also claimed the contract would allow RPD to buy durians from the Raub farmers at a fixed price of RM30 per kg for Grade A Musang King durians for two years starting from 2021.

It claimed this price to be unfair to the farmers, based on the current average market price of RM45 per kg for the premium grade. 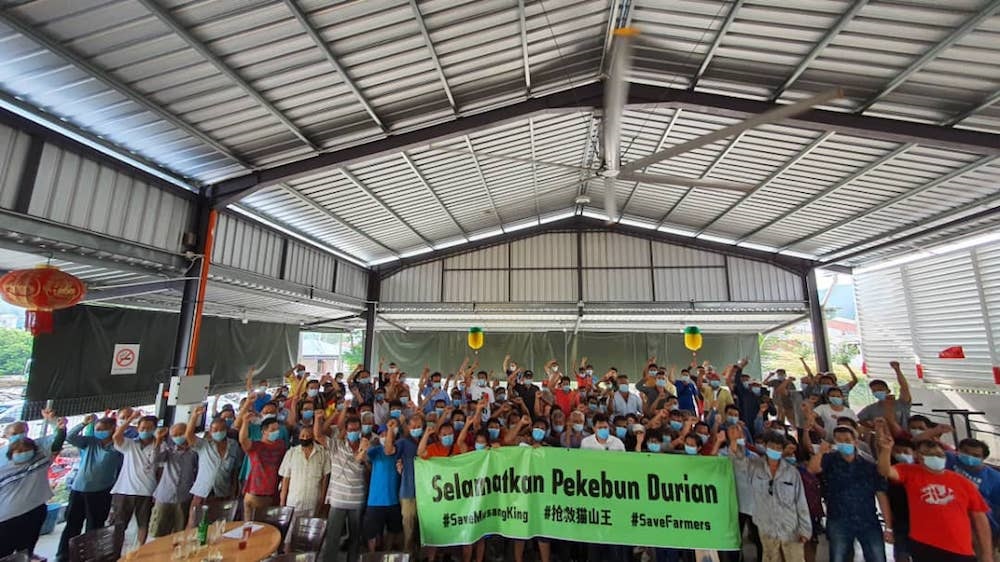 Musang King durian farmers alleged they are being pressed into signing an exploitative contract that would require them to pay ‘rent’ of RM6,000 per acre for this year. ― Picture courtesy of Save Musang King Alliance (Samka)

However, the RDP Group rejected Samka’s allegations on August 21, telling Malay Mail that it is instead protecting the local durian industry from foreign players. It added that the legalisation scheme would ultimately lead to a win-win situation for the durian farmers, the state and the  industry.

It was also reported that from August 24, the second entity RPDR-PKPP started setting up manned checkpoints along several critical routes leading to the Raub durian farms, and allowing access only to those who had applied for an entry permit from them.

Upset by this turn of events, some farmers were reported to attempt to stop RPDR-PKPP from setting up more security posts across the large swathe of land.

At the time of writing, RPDR-PKPP has filed three police reports following a series of harassment believed to be linked to the ongoing land legalisation scheme in Raub.

On August 25, several videos started circulating on social media, purportedly showing unknown people cutting down durian trees in Raub. These actions were allegedly carried out by the durian farmers to protest what they saw as the takeover of their farms by the state.

On August 21, 111 durian farmers in Raub filed for a judicial review against the Pahang government ordering them to vacate their farms.

Apart from a review of the order to vacate the land under the National Land Code 1965 and the National Forestry Act 1984, the farmers also asked the court to review the state government’s decision to award the lease and right to use some 5,357 acres (about 2,167 hectares) to RPDR-PKPP.

Additionally, the farmers asked the court to review the state government’s decision to sub-lease the affected land to them as well as a requirement in the contract to sell their durians to a single entity nominated by RPDR-PKPP.

On August 28, the High Court in Kuantan ordered the Pahang authorities to suspend all enforcement and eviction measures against the durian farmers until their application for judicial review is decided.

How durian farming started in Raub

While the court case is not for another month, let’s take a look at how Raub became a hub for the production of the highly prized Musang King durian variety, loved by aficionados for its golden hue, velvety texture and sweet taste with a slight note of bitterness mixed in.

According to Raub resident and Samka president Wilson Cheng, settlers moved into the district in the early 1970s. He attributed this to the security restatement scheme started by PKPP’s predecessor, the Pahang State Agricultural Enterprise Development Authority or simply known as LKPP.

“The scheme was meant to help those who aided in the government’s efforts against the communist insurgency. They were resettled here and were promised land to work on,” he told Malay Mail when contacted.

According to Cheng, many started planting rubber trees, cocoa and other commodities on the land. In the early 2000s, he said the farmers moved on to a commodity ― durians, specifically the Musang King variety.

“I would say it all started in 2003 or 2004. That is when people started to plant Musang King durians abundantly, among other variants of durian,” he said.

According to Cheng, Raub has over 900 farmers now and 11,000 acres, of which a good part will be affected by the legalisation scheme. 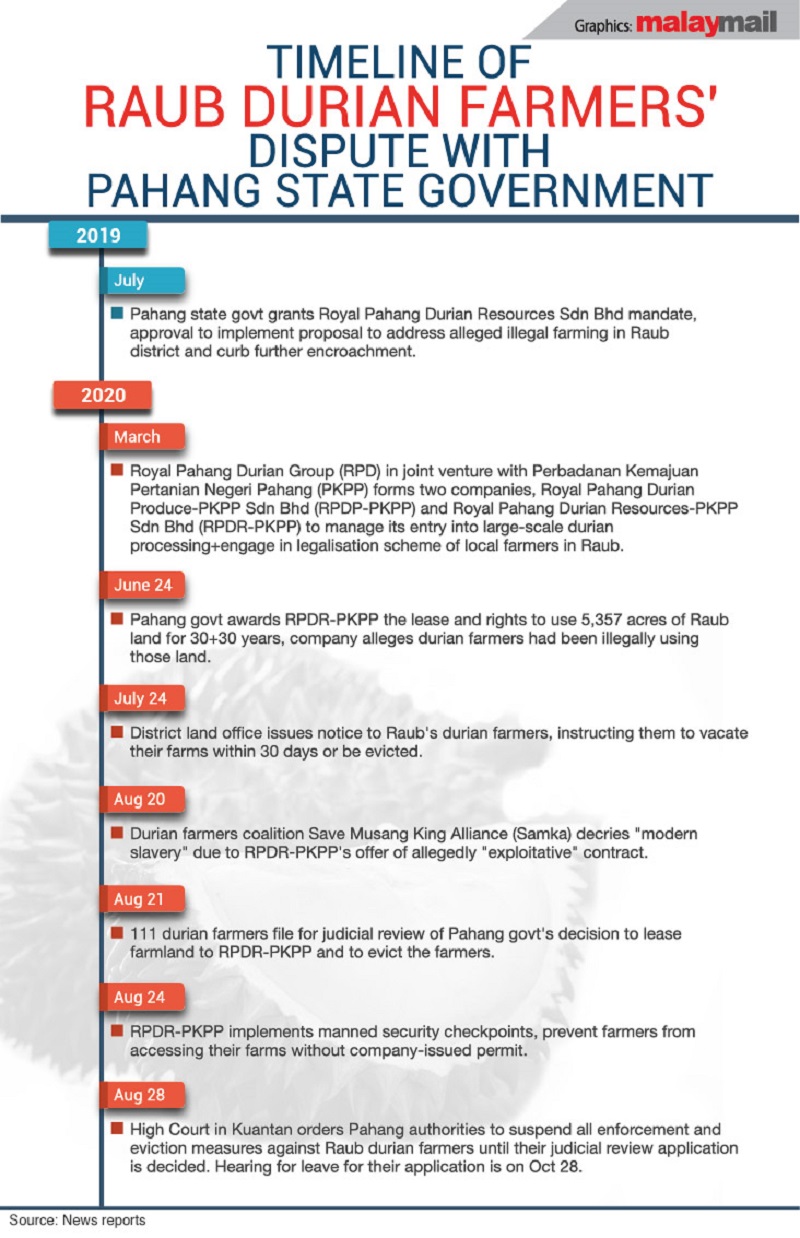