Bukit Aman sexual, women, and child investigation division principal assistant director, Superintendent Siti Kamsiah Hassan speaks to Malay Mail during an interview in Kuala Lumpur August 18, 2020 ― Picture by Shafwan Zaidon
Follow us on Instagram, subscribe to our Telegram channel and browser alerts for the latest news you need to know.
By THASHA JAYAMANOGARAN

Its principal assistant director ACP Siti Kamsiah Hassan, during a special interview with Malay Mail recently, said that her department’s study found instead a rise in the number of parents being abused by their children during the first three months of the MCO.

“Before the MCO came into effect, most abuse cases reported stemmed from husbands of working wives — with most suspecting their wives of having an affair when they are at work or out independently.

“During the MCO, this somewhat changed because they were mostly homebound and the type of activities in the household changed. There was no movement for the women and therefore no room for husbands to accuse their wives of anything.

“But of course there was another type of petty issue that took place as couples adjusted to being homebound 24 hours such as arguments and misunderstanding from doing home chores, that triggered petty fights. But to say because of MCO, domestic abuse cases have increased — our analysis does not support that theory,” she told Malay Mail.

Siti Kamsiah said three months before MCO, D11 recorded 261 cases of domestic abuse and during the concurrent time frame of MCO, her department only recorded 205 cases.

However, she said cases of parents being abused by their children increased from 125 cases to 134 cases during the same period.

“Based on the figures you can see the trend. Cases involving family members increased compared to cases involving husbands and wives. Domestic violence is not only about husband and wife. You need to pay attention to others also, especially family members, in-laws, and siblings,” she asserted.

During the MCO, many women’s NGOs in the country said for domestic abuse victims, home is anything but a safe haven as they faced job losses, uncertainty over salaries, forced isolation and stressed households which resulted in a steep rise in violence against women based on the number of calls they received.

“More awareness. That’s why they are coming forward. They know their rights better these days with the help of technology and our constant engagement but that doesn’t necessarily translate to a rise in violence against women.”

But why are the NGOs’ and police statistics different?

Siti Kamsiah explained to Malay Mail that based on recent meetings with the Department of Social Welfare (JKM) and Women, Family and Community Development Ministry (KPWKM), D11 was made to understand that its statistical records were based on every call received for information.

“Our statistics is based on the reports we received and subsequently have an investigation paper opened. Our statistics do not include those who come to us just to make a report to be redirected to the court for divorce cases or any other information that they are not sure about.

“Such reports are not considered a crime. We don’t include that in our statistics. Divorce cases can stem from various other reasons besides domestic abuse,” she explained.

Siti Kamsiah also added that most times women come to the police not to lodge a report but to get information on other matters such as how to get counselling and to seek advice before proceeding with any report.

“Though such matters are not under our jurisdiction, we redirect them to the relevant channel and department. So we can’t include such cases in our statistics.

“What I understand from the statistics coming from other bodies and NGOs is that their numbers include inquiry calls. That’s why their stats are a lot different and high. Not all the calls they received are incidents of physical abuse taking place,” she explained.

Meanwhile, explaining the perception by certain quarters that police statistics differed as many did not leave home to report during the MCO, fearing being reprimanded by authorities for leaving home, Siti Kamsiah said this can’t be a contributing factor.

“The perception of our statistics being low when it comes to domestic violence cases because victims are scared to come out or because of any roadblocks during the MCO is not true as you can always tell a cop at the roadblock that you are heading to the police station because you got assaulted and of course they would let you proceed.

“So to say that the MCO period saw a rise in domestic violence cases because one couldn’t move around is inaccurate.

“Victims who fear their abusers or of being locked up, could have reached out to their close ones to reach out to us. Of course the police will be at their doorstep,” she said.

Siti Kamsiah said the D11 has an open paper on the reports it received, which can be audited by anybody who still argues that figures are manipulated. She added that every report is recorded in its system and D11 has nothing to hide.

How did parents become abuse victims? 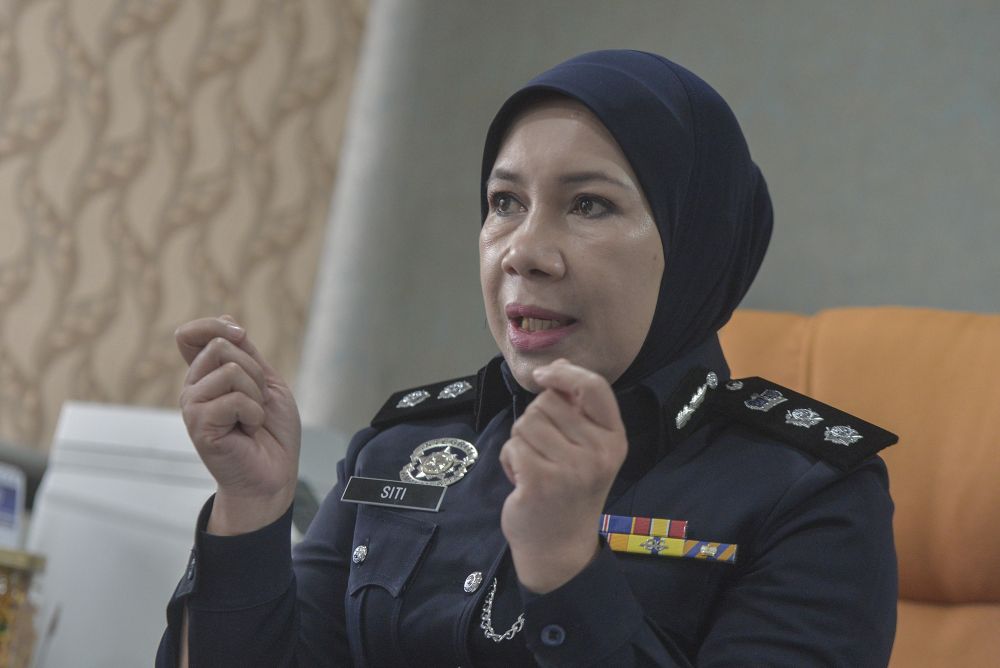 Siti Kamsiah highlighted a 20 per cent increase in parental abuse by children during the MCO. ― Picture by Shafwan Zaidon

In a twist to the domestic abuse pattern, Siti Kamsiah said there was a 20 per cent increase in parental abuse by children during the MCO caused by financial constraints.

She said the abuse cases stemmed from desperate children who had lost their jobs, endured pay cuts and those who were unable to participate in illegal activities due to restricted movement and others involved in criminal activities for their income.

“Parental abuse by children was higher during the MCO. Children became frustrated when their parents didn’t meet their demands by providing financial support and subsequently, their anger and frustration turned them into assaulters,” she said.

“In fact, cases like ex-husbands and ex-wives fighting also came down during the MCO because of limited movement. They can’t go to each other’s house to find trouble or show anger etc. Nobody wanted to risk movement because what would they tell the police at a roadblock? They won’t have a valid reason to give and only receive a summons in return.”

Siti Kamsiah said most of the cases of parental abuse involved children aged between 30 and 38.

Is mental abuse a crime too? Also, why do women stay in an abusive environment?

According to Siti Kamsiah, if your spouse calls you stupid daily or does not provide household support, it can be considered a crime that can be investigated under Section 323 of the Penal Code.

However, in such cases, one must first get the evaluation of a psychiatrist to establish the level of emotional abuse that has affected one’s well-being.

She said many women out there are still not aware of this or fail to identify mental abuse. She said it is crucial that women know this instead of suffering alone.

“They think it’s merely words and that it doesn’t matter, but it has a long term impact on their mental health. If you feel ignored and your mental health is deteriorating with insulting words from your spouse, it is a crime,” she stressed.

Another type of crime women need to take note of is being forced into sex by their spouses, which is a crime under Section 375(a) for husbands causing hurt in order to have sexual intercourse or Section 375 of the Penal Code related to marital rape.

Meanwhile, Siti Kamsiah shared that one of the main factors victims in an abusive marriage choose to remain in the relationship is because of financial support.

“Most of the cases we deal with that end up with the woman retracting a police report or they don’t come forward is because they fear losing a place to depend on for companionship and finances.

“So to them, they rather go through the torture and hardship instead of getting help. Some of them also have the mindset that making a police report is much worse because in these kinds of cases it is tricky, as it involves their ‘bonding’ and ‘feelings’,” she said.

Siti Kamsiah explained that they usually only go to the police for help when they have reached a trigger point.

“Abusive relationships usually take time to reach the trigger point. Because of affectionate feelings and bonding, they will attempt to fix the relationship. When they reach a stage where they really can’t take it, then they will come to us.”

Women need to put themselves first, know their rights

“Put yourself first and always take care of yourself first,” this is what Siti Kamsiah wants to tell women experiencing domestic abuse.

She said allowing prolonged abuse will have a major psychological effect not only on the victim but also their children, families and their future in the long term.

“Come forward and seek justice immediately, love yourself first. If you come much later after a certain ‘incident’ has taken place, it will affect police investigations.

“Because when you come late, there is no physical or sexual injury as evidence, crime scene evidence gets compromised and digital evidence too,” she explained.

She also advised these women not to share their abuse on social media as there is a chance of the abuser erasing evidence from his phone when the police comes knocking on their door.