Retail and Trade Brand Advocacy Malaysia Chapter (RTBA Malaysia) said it also sours the relationships between countries in the region.

The advocacy group protects businesses in the Asia-Pacific region from criminal conduct.

Among the cases, these involved Malaysians:

This was the largest tobacco seizure in a single shipment made by the New Zealand authorities.

Also in July, some PHP700,000 (RM60,000) worth of smuggled Malaysian cigarettes was abandoned in Malabang in the Philippines, after the authorities tried to intercept the shipment.

Earlier in March, a 22-year-old Malaysian student was charged with cigarette smuggling by the Australian Border Force in Perth after he was found with 30 cartons worth A$5,600 (RM15,520) concealed inside a fake data cable spool.

“Malaysia currently has the highest penetration of illegal cigarettes in the world at 62 per cent of the market, with more than 12 billion sticks sold annually.

“The sheer size of this tobacco black market funds and facilitates a highly sophisticated multinational eco-system run by criminals.

“This enables the problem to spill over to other countries causing economic harm and exacerbating social ills that are linked to this black market."

“Businesses and livelihoods are at stake and it is now as urgent and critical as ever for the Malaysian government to step up efforts to curtail the tobacco black market quickly and comprehensively,” he added.

In proposing solutions to this problem, RTBA's Illicit Tobacco in the Asia-Pacific Region: Causes and Solutions report published in April, 2020 recommends the formation of a multi-agency multi-national task force to address this issue from a government-to-government perspective.

The report also recommends diminishing the profitability of perpetrators of the tobacco black market through excise reforms.

“Closing the price gap between legitimate cigarettes and illicit or smuggled cigarettes can be an effective and pragmatic measure to stop the tobacco black market contagion from spreading across the region,” Datuk Fazli said. 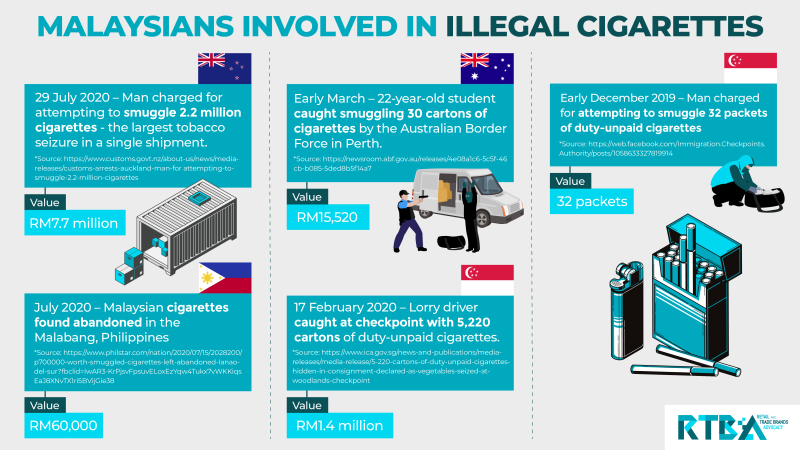