With Najib’s SRC verdict set to be known today, a recap of the 95-day trial

Presiding over the trial, High Court judge Mohd Nazlan Mohd Ghazali is expected to deliver his verdict under the watchful eyes of the various international, local media and ordinary Malaysians in a historical turn of event.

Najib's SRC trial, also the first of five ongoing criminal trials, has so far seen a total of 76 witnesses ― 57 from the prosecution and 19 from the defence ― being called up to testify since the trial began on April 3, 2019.

With that, here is Malay Mail’s recap of the prosecution and defence submissions made in court with highlights of Najib’s testimony if you have not been following the case closely.

Our other trial recaps on Najib’s cheques issued from one of his personal bank accounts amounting to over RM7.2 million, notable drama that unfolded throughout the trial, flurry of fund transfers and complex money trail involving Najib’s personal bank accounts in the trial and on establishing a prima facie case in Najib trial are also available for further reading.

Najib started testifying on December 3, 2019 after the court decided on November 11, 2019 that he had to enter his defence following the prosecution’s success in laying out its case with the testimony of 57 prosecution witnesses and multiple documents.

He had then chosen to testify as a witness in his own defence and so opened himself to cross-examination from prosecutors and public scrutiny.

In his 243-page defence statement that he read out and his replies to lawyers in court, Najib made denials in many things including his role in the setting up of SRC International while highlighting his alleged personal relationship with fugitive financier Low Taek Jho or Jho Low.

Throughout his testimony, Najib had continually maintained that about RM3.2 billion worth of funds that were deposited into his accounts via 23 transactions between 2011 to 2013 were purportedly donations from the Saudi royal family.

He had also sought to assert his innocence in the entire SRC International affair by saying that he would not have acted stupidly to put stolen money into his personal bank accounts.

For further reading, Malay Mail has compiled a list of highlights in Najib’s testimony throughout his 15-days as a defence witness in the trial.

During the prosecution stage of the trial, prosecutors had insisted in their submission that Najib was complicit in the deposits totalling RM42 million from SRC International in his private bank accounts.

The prosecution in their argument had remarked that Najib’s claims of innocence was quashed in how the cash was not only spent by Najib, but that he had issued cheques, and not lodged a formal report over the monies to any authorities.

In their subsequent submissions during the defence stage, prosecutors also said Najib “deliberately” chose wilful blindness by not inquiring about the source of RM42m deposited into his accounts.

Among the most damning evidence the prosecution pointed out was how Najib continued to spend without any care even after claiming to have no knowledge of the exact amount of Arab donations entering his accounts.

They also said Najib was well aware of the financial situation and balances of his bank accounts ― provable through evidence showing Najib had spent all of the RM42 million he is accused of misappropriating in 2014 and 2015 ― as he was in constant contact with three individuals.

The prosecution had also pointed out discrepancies in Najib’s defence in that the Arab donations had all taken place from 2011 to 2013, with the subject of this trial’s charges involving funds that made its way into his account over the period of December 2014 to February 2015.

Throughout the entirety of the defence stage, Najib’s lawyer has consistently maintained that Najib had a genuine belief that Arab donations were the source of RM42 million in SRC International funds that were allegedly deposited in his private accounts.

The claim was supported by four purported letters from Prince Saud Abdulaziz Majid Al-Saud produced by Jho Low between February 1, 2011 and June 1, 2014, leading to Najib’s belief that the funds totalling some RM2.6 billion were indeed donations.

The defence also sought to blame the alleged misappropriation of the company's funds on “third parties”, citing Nik Faisal and Jho Low as those responsible instead while Najib was tricked and misled by those around him.

They had also argued on the admissibility of evidence adduced by the prosecution with the crux of their reasoning banked on inconsistencies within witness’ testimonies while pointing out how funds that ended up within the bank accounts of Najib were transacted without his knowledge.

In what seemed to be an attempt to win public opinion, the defence also claimed that their case was hamstrung by circumstances surrounding the allegations and the number of personalities involved.

Out of the seven charges Najib faced, the Pekan MP is accused of committing three counts of criminal breach of trust over a total RM42 million of SRC International funds while entrusted with its control as the prime minister and finance minister then, and a separate charge under an anti-corruption law of abusing the same positions for self-gratification of the same RM42 million sum.

If found guilty, he is liable to a 20-year jail term, and a fine of RM5 million or five times the amount of money laundered, whichever is higher. 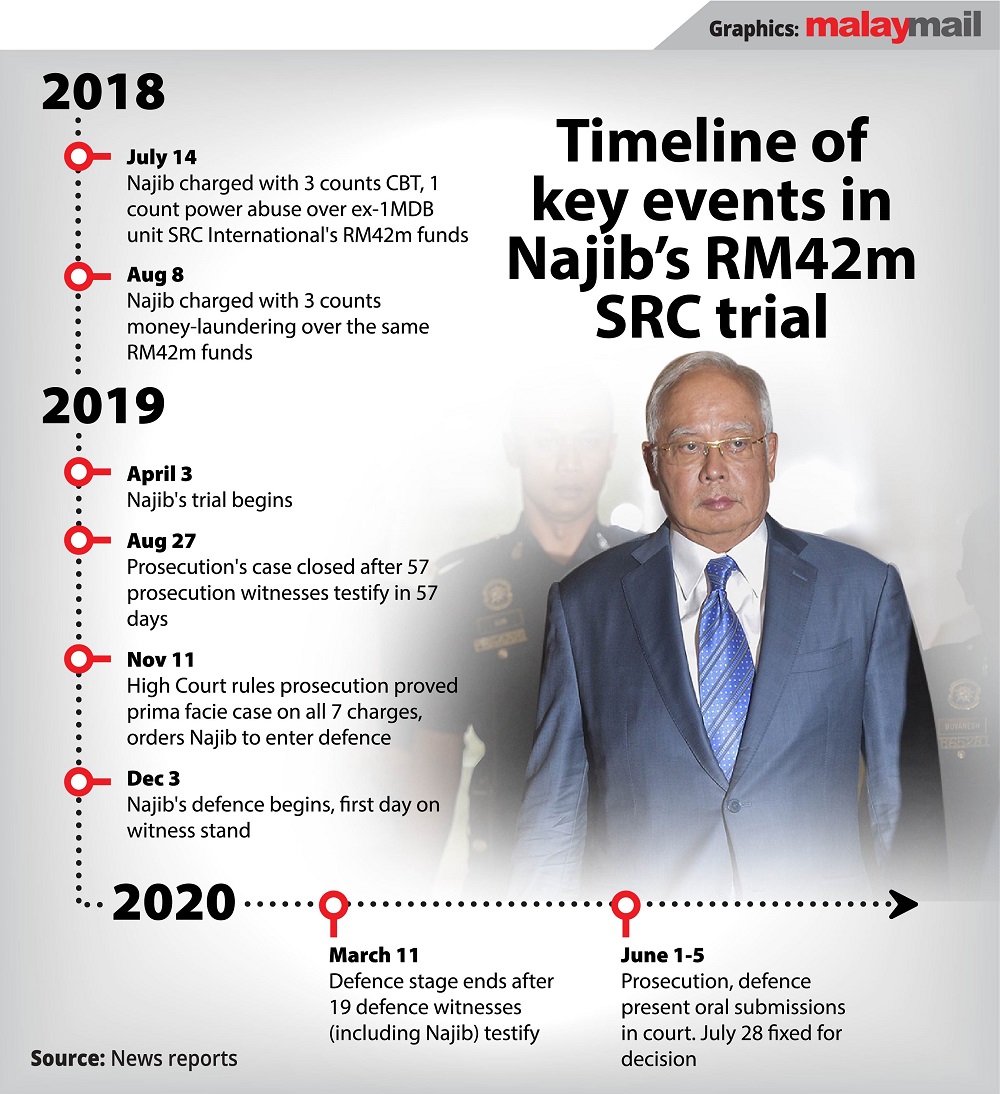