The popular mural, which is believed to have been defaced by vandals, is seen covered with a piece of tarpaulin. — Picture via Twitter
Follow us on Instagram, subscribe to our Telegram channel and browser alerts for the latest news you need to know.
By CHAN WAI KIT

The footage, which is being shared in the form of a video as well as stills, shows what appears to be two women casually walking up to the mural before proceeding to spray words across it with paint cans.

The video ends with the pair disappearing down the alley where the mural was located and back onto the main road after their deed was done.

Although the quality of the footage is relatively poor, sharp-eyed Malaysians have pointed out that one apparent vandal appears to be wearing light-coloured clothing and has long hair that spills past her shoulders, while the other is wearing a light-coloured top and dark trousers, and also has long hair, but tied in a ponytail.

He added the investigation will be conducted under Section 504/427 of the Penal Code, which carries a prison sentence of no less than one year and no more than five, a fine, or both penalties.

“Those with further information may contact ASP Yong Meng Heng at 019-5753399, or the nearest police station,” he said.

Meanwhile, Shah Alam City Council (MBSA) said today it has painted over the defaced murals and will take stern action against the vandals once they are caught. 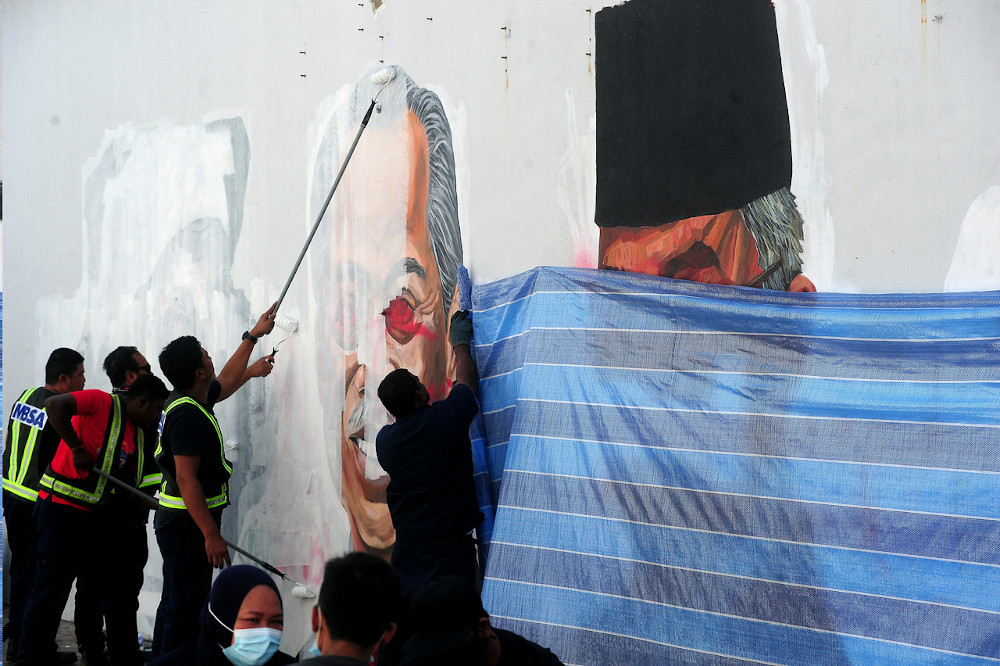 It appears the vandalisers ran out of spray paint, as a half-formed word could be seen in between the space of Dr Noor Hisham and Ismail Sabri, while Zulkifli’s mural was untouched.

The mural first came to attention earlier this month after painters Muhammad Suhaimi Ali, Abdul Hadi Ramli and Muhamad Firdaus Nordin made the mural as a gesture of appreciation towards the country’s leaders and fellow Malaysians for their contributions.

Among those who were reported to have visited the mural include both the Agong and Dr Noor Hisham, after the mural went viral online with over 17,500 retweets.