Bukit Aman: It is an offence to ‘rent out’ your bank accounts, scammers use them to launder illegal funds

KUALA LUMPUR, July 16 — If you allow someone to use your bank account for illegal purposes — often referred to as “mule bank accounts” — you are breaking the law. Even if you are not directly involved in whatever your “renter” does.

Bukit Aman Commercial Crimes Investigation Department (CCID) acting director Commissioner Datuk Saiful Azly Kamaruddin, in an interview with Malay Mail, said many of those who rent out their bank accounts think what they are doing is not illegal.

Their motive, he said, is to make some quick cash as the scammers pay them for allowing them to use their bank accounts.

He added that these money mules can be charged under Section 424 of the Penal Code for fraudulently concealing monies and Section 29(1) of the Minor Offences Act 1955 for being in possession of stolen goods.

He went on to explain that these fraudsters target youngsters as they are the most vulnerable; easy to recruit on social media and often short of money.

“Many people do not know that these mule scams are illegal, they do not realise the punishments.

“These mules range from drug addicts to students looking for fast money... from as little as RM100 to RM200 while experienced account renters can rake in bigger figures,” he said.

Saiful Azly said most of these money mules are aged between 20 and 40 but warned that the elderly need to be alert, as scammers are also targeting them and those without any criminal backgrounds, as they will be deemed less suspicious by the bank and other relevant authorities.

Wait... there are different types of mule bank accounts?

There are a few types actually. One is actually created by criminals using stolen or synthetic identities where they use entirely legitimate or blend legitimate and fake customer information to open an account.

Scammers have complete control when they use stolen accounts as it cannot be traced back to them.

Here they can use the account to transfer funds between them to “clean” the money or to raise credit scores on the accounts before withdrawing up to the credit limit.

The second are those accounts belonging to legitimate customers who have allowed criminals to use their accounts.

Often these are people who are after quick cash and they are known as “money processing agents.” Some take up this “serious job” knowingly but there are those who do not realise that such activity is illegal.

All they have to do is provide their bank account details. Money then comes into their account and they follow instructions to send this money on to another account — often for a cut of the sum being transferred.

Many think it is a harmless and easy way to make money but it is illegal as the money can end up being linked to all sorts of crimes including terrorism, drugs, illegal arms dealing, people trafficking and more.

Often when a mule bank account is identified, the account owner ends up taking the hit for such crimes while the scammers get away scot-free.

The third type of mule bank account is a scam that affects older people. This happens when someone is taking a loan but don't realise it is from an illegitimate company.

They receive more money than they asked for and told it is an administrative error. They are then asked to send the overpayment to a bank account different from the one that sent them the money in the first place.

This is how criminals “clean” their money, making it harder for investigators to trace.

What is CCID doing to combat this? 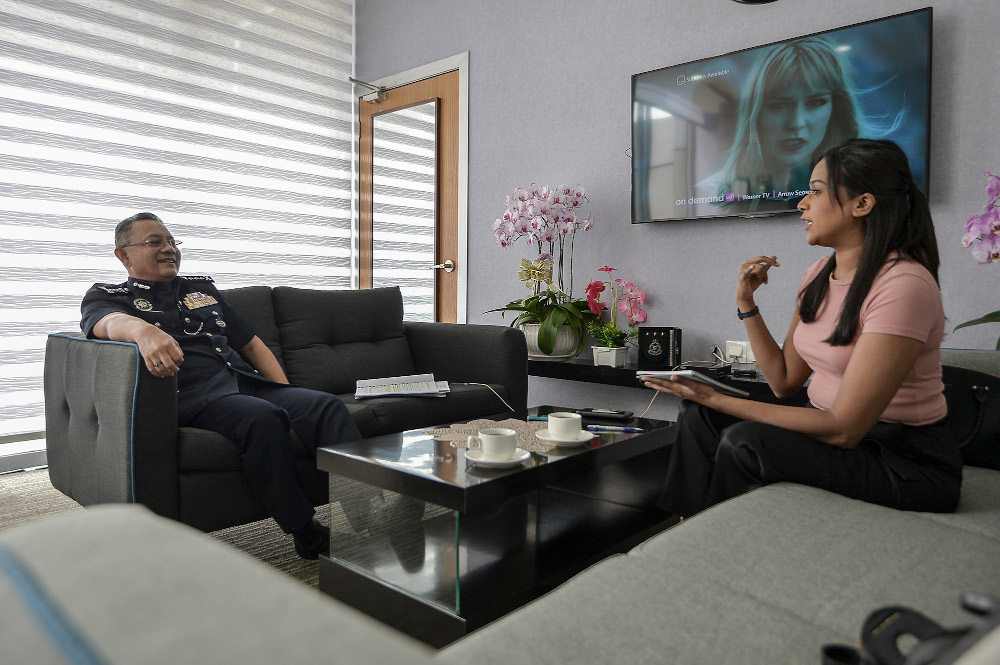 Saiful Azly (left) said most money mules are aged between 20 and 40 but warned that the elderly need to be alert, as scammers are also targeting them and those without any criminal backgrounds. — Picture by Shafwan Zaidon

Saiful Azly said his men are conducting daily operations and are working closely with banks to nullify mule bank accounts, especially those masterminded by Macau scammers here in Malaysia.

“We have a special Internet Banking Taskforce (IBTF). All districts in Malaysia will notify the banks via that platform, so they (banks) know how to corner and blacklist these mule accounts.

“The banks will also work with us and tip us off when the suspects are going to withdraw money and we will move in immediately to arrest them... that's how we work.

“Bank Negara Malaysia is supporting us by instructing all banks to inform us about suspicious transactions and allow us to inform them to freeze suspicious accounts immediately so that chances are higher to recover the money back to the victims,” he added.

The CCID has a Semak Mule portal that can be accessed by the public to check on bank accounts or phone numbers which have been linked to criminal activities. Members of the public can also WhatsApp CCID’s info line at 013-2111222.

“You want to check someone's phone number or company... that is our ‘rogues gallery.’ You can check any suspicious company names there too,” he added.