Shohel (fourth from left) and his eight housemates. All of them were fasting but insisted on serving us tea. — Picture by Shafwan Zaidon
Follow us on Instagram, subscribe to our Telegram channel and browser alerts for the latest news you need to know.
By R. LOHESWAR AND RADZI RAZAK

KUALA LUMPUR, May 24 — Every year, during the fasting month, Shohel Mollah and his eight colleagues would send extra money back to their families in Bangladesh.

The money would be used to buy new clothes and some extra meat to cook for Aidilfitri. This was their way of celebrating with their families.

This year, that did not happen. In fact, the men now find themselves in need of help.

With no work for the past two and a half months because of the lockdown, they are struggling to feed themselves. Plus, there is great uncertainty about their very livelihood.

Shohel’s uncle even had to send him RM500 just to buy food. Their employer had given them some food in advance but the cost for this would be deducted from their salaries later.

“Usually on Raya we cook biryani, roti with curry and dhal, pulao and also we make our favourite sweet... shemai. This year we’ll be happy to have rice and eggs,” he said, when met a few days before Raya.

(Pulao refers to a rice dish cooked in broth, while shemai is a Bengali dessert of sweet vermicelli.) The narrow corridor in the apartment where nine Bangladeshis live. — Picture by Shafwan Zaidon

Shohel and his friends live above a shoplot in Petaling Jaya in what was once an office. The place is still full of old office furniture and has a leaking roof that looks like it is about to cave in at any moment; it is also connected by a narrow corridor, just 45 centimetres in width.

There are three rooms, with three occupants each, and a tiny kitchen overlooking the back lane. In the afternoon, the rooms get extremely hot which was a challenge during Ramadan.

Most of the people we met here work in construction.

Since the government halted all construction projects, there is a lot of uncertainty as to when and if at all they can return to work.

Shohel told Malay Mail there are around 55 immigrants living in the area, and took us to another shoplot with another 10 Bangladeshis.

Abas Sordel (third from left) became the sole breadwinner after his father died nine years ago. — Picture by Shafwan Zaidon

Abas Sordel, 30, came to Malaysia nine years ago. Abas’ living conditions are slightly better than Shohel’s, with more space to walk around in.

“When I arrived here, my father died. As the eldest, the onus now fell on me to look after the family and my four siblings.

“I earn on average RM1,800, and send RM1,000 home every month. During Raya, I'll try to send some extra money for them to buy clothes, fix the house, keep some in the bank for a rainy day and so on. Now without a job for two months, the situation is desperate.

“They want me to go back home but I don’t have money for a ticket. So I have no choice but to stay and see what happens in the near future,” said Abas, referring to his family. 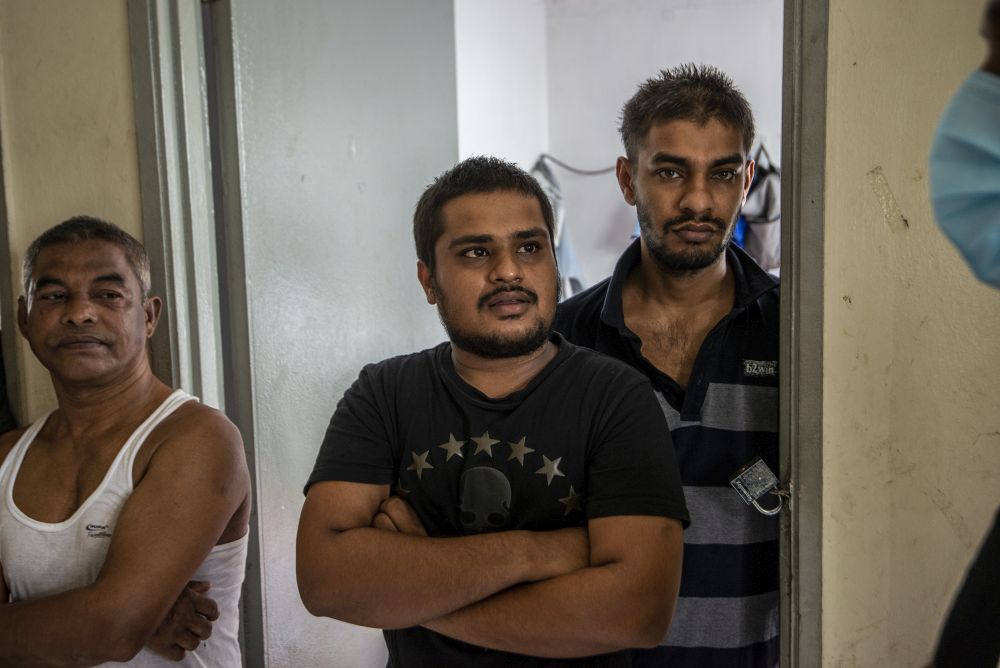 Nasiruddin Saren is worried about the rent and how they will pay it now that their money has run out. — Picture by Shafwan Zaidon

For Nasirudidin Saren, 24, Aidilfitri usually means an abundance of food. With no such delight this year, he asked if this is even a festive season.

“We got no food, no money and now we still have to pay the rent. They’re charging us RM150 per person,” said Nasiruddin.

“We haven’t paid the rent here for months now and our bosses were kind enough to help us out but we have to pay him back.” After graduating in 2018, he could not find work and has instead been working as an office cleaner.

He lives with 11 others, four of them young students. Ahmmad said he could see the young men struggling during the lockdown.

“They had some part-time jobs but now with no work, no food, no money, their mental state is questionable. They have to do online classes but with no food in their bellies, they just can’t focus.

“I can sense they are struggling to cope. It’s not easy to sit at home all day doing nothing, not knowing where your next paycheck will come or if it will come at all.

“That’s why this year’s Raya is very sad. We feel lost. We used to go to many of our peers' homes to celebrate and just relax but this year we can’t do that.

“So there’s nothing to be happy about,” he added.

In a 2019 World Bank report on the number of foreign workers in Malaysia, official government data differs on the total: from the Home Ministry’s estimate of around 1.8 million to the Department of Statistics’ 3.3 million.

The report said unofficial estimates of the total number of foreign workers tend to be much higher, ranging from 3.4 million to 5.5 million. A Parliament discussion in 2016 even suggested that there are two foreign workers for every five Malaysian citizens.

The latest data from the Human Resources Ministry in 2018 showed that most of them come from Indonesia, followed by Nepal and Bangladesh. According to the Home Ministry, an overwhelming 80 per cent of them are male.

The bulk of them, at around one million, are working in Selangor, followed by Johor and Sarawak.

In Taman Desaria in Petaling Jaya, a community of Indonesian migrants from Madura usually holds huge feasts or kenduri during Aidilfitri.

This year, there will be no such activity, and they have mostly taken to staying at home as Malaysian authorities target foreigners whom they think are more prone to be infected with the coronavirus. 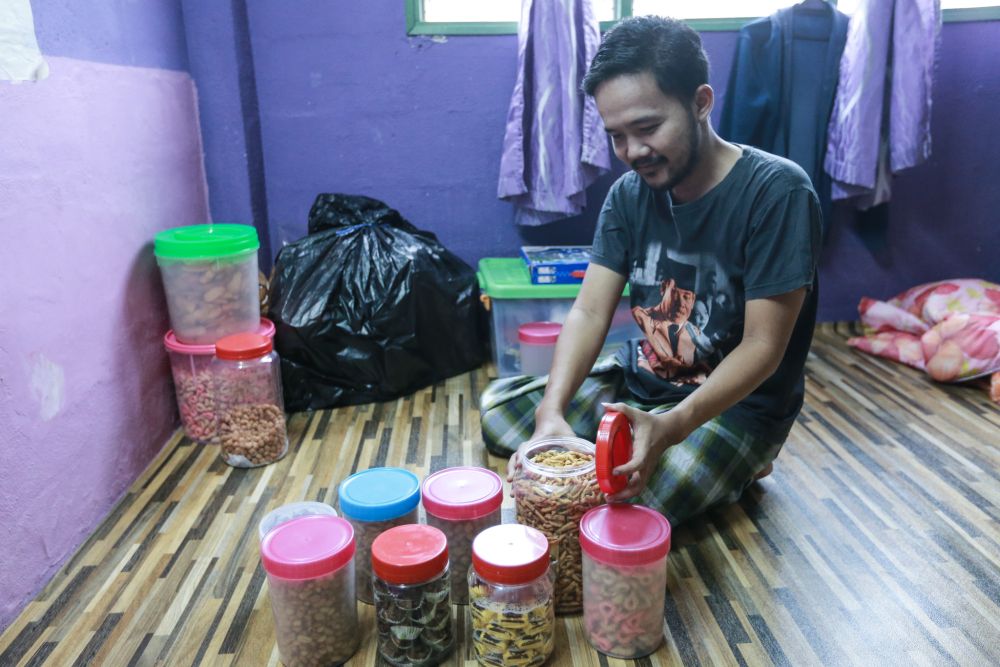 Abdul Rahman with some Raya treats... it will be a low-key celebration this year. — Picture by Ahmad Zamzahuri

“These people are inherently a happy-go-lucky bunch. They came here to better their lives and are hard working people,” said Abdul Rahman from Gusdurian Malaysia, an NGO that works closely with the Indonesian community in the area.

“They are a boisterous bunch and Raya is truly an event to behold. They have never not been able to celebrate Raya and now with the difficulties with money, food, etc, it’s pretty gloomy around here.”

For a group of Acehnese immigrants, this pandemic has rendered Hari Raya into a non-event. Salleh Azhari, 34, said Hari Raya will be very low key this year.

“The previous years, we could visit our friends all over Kuala Lumpur after Hari Raya prayers. I could also visit my uncle in Selayang and other family members who have become citizens and permanent residents. Now it's hard as you cannot easily visit each other,” he told Malay Mail.

Salleh, who has been working in factories and construction sites for the past 10 years, said most in the community experienced a loss of income during the lockdown, further adding to the sombre Hari Raya mood.

“Those who were earning daily wages in construction are affected. Those who worked in factories were also affected when they closed for a while. Those who operate sundry shops also have problems as fewer people can buy nowadays,” he said.

For Muhammad Hassan Dari, 28, the lockdown means he is not able to return to Aceh in order to celebrate Hari Raya with his family.

“I usually go back for two weeks but now I cannot. I can only send some money home and talk to my family over the phone,” said the factory worker who has been in the country for four years.

His friend Mustafa Safri, 30 said he is planning to video call his wife, son and brothers on the first day of Hari Raya.

“That is what Hari Raya means to me. Talking to people we love and miss. Although we cannot be together, we can still see each other’s faces on the small screen,” he said, smiling.

Meanwhile, those in the Rohingya community are struggling to feed themselves after work dried up during the lockdown.

Sahib, who arrived in Malaysia back in 2013, said he has not been able to provide for his wife and two young children.

“I used to do odd jobs like hauling goods at the wet market, helping out at restaurants and cutting grass but after the lockdown (MCO), nothing could be done.

“We are receiving help from NGOs and some donations but nothing more,” he said.

On top of the lockdown woes, the community has been the target of concerted xenophobic attacks on Malaysian social media since April.

“I think we just need to keep on living and praying to Allah this Aidilfitri,” he added.

His friend Mohib said there was a marked difference in how they were treated by the locals this year, compared to last year.

“Most of us here have the UNHCR card, and for the past five years, the locals have been okay with us.

“We can make business by offering our services for odd jobs but since last month things are bad. Our women and children got harassed and we were threatened with arrest and deportation.

“But most of the people, especially NGOs and locals who helped us, are still the same and good to us,” he told Malay Mail.

Another man, Abdullah, who has been in Malaysia for about 10 years said not all is lost, as there are Malaysians who have forged deep relationships with the community.

“I am thankful for those who helped the community since the lockdown began. Those who provided food, supplies, medicine and even those who came to talk and ask how we are.

“We are not trying to steal this country, we are merely trying to continue our lives. In times of crisis, true friends reveal themselves. Maybe that is what we call a blessed Aidilfitri,” he said, smiling.