Datuk Seri Mohamed Azmin Ali insisted that every state should cooperate by carrying out the standard operating procedures for the reopening of businesses and industries under the more relaxed CMCO that started today. ― Picture by Firdaus Latif
Follow us on Instagram, subscribe to our Telegram channel and browser alerts for the latest news you need to know.
By IDA LIM

KUALA LUMPUR, May 4 — Every state in Malaysia should cooperate by carrying out the standard operating procedures for the reopening of businesses and industries under the more relaxed conditional movement control order (CMCO) that started today, Senior Minister Datuk Seri Mohamed Azmin Ali insisted.

Azmin, who is also minister of international trade and industry, noted that some of the state governments in Malaysia have refused to cooperate and follow the federal government’s new SOP.

“Effective today companies from almost all sectors of the economy are allowed to operate following the government’s decision on April 29, 2020.

“Nevertheless, the government is aware that several states are not co-operating in implementing the Government’s decision,” he said in a lengthy statement.

Azmin urged state governments in the country to continue previous cooperation in fighting against the Covid-19 outbreak by now working together with the federal government to open up businesses.

“Hence, the state governments are urged to co-operate in executing the federal government’s decision to regenerate the economy. The government is confident that we, as a team, will succeed in winning the ‘war’ against the Covid-19 pandemic.

“We have worked shoulder to shoulder in implementing the MCO in our efforts to contain Covid-19. Now, we need to remain united and strengthen our collaboration towards our economic sustainability, securing our livelihoods and the well-being of the people,” he concluded in his four-page statement.

Earlier in the same statement, Azmin noted that several industry bodies such as the Federation of Malaysian Manufacturers and the Malay Chamber of Commerce of Malaysia have already urged for state governments not to impose direct restrictions to stop companies from resuming their operations from today (May 4).

“Should the state governments refuse to co-operate in implementing Act 342 which has been gazetted into law enforceable throughout the country, the state governments may face the possibility of legal action from various parties, particularly the industry players,” he said, referring to the Prevention and Control of Infectious Diseases Act 1988 which is the main law used to enforce and lay out regulations for the MCO in the country.

Among other things, Azmin said the federal government had previously conducted various engagement sessions with stakeholders in the economic sectors, especially industry associations, local and international Chambers of Commerce as well as Small and Medium Enterprises in order to gauge the impact on business sustainability, supply chain and employment.

In the same statement, Azmin also defended the federal government’s decision to reopen businesses and industries under the CMCO, insisting that it was not done hastily but with “utmost care, caution and responsibility” backed by data and findings by MITI, the Finance Ministry, Bank Negara Malaysia and Khazanah Nasional Berhad.

Azmin also highlighted that state governments knew about these findings, and had been given the CMCO SOPs for the reopening of the economy ahead of today.

“The findings were presented for discussion with the mentris besar and chief ministers at the meeting of the National Security Council on 28 April 2020.

“Based on the discussions during the meeting, the state governments realised that should the MCO continue until June 2020, the cumulative loss of the national income is estimated to reach RM146 billion or a shortfall of 10.3 per cent of the GDP. This would wipe out the economic success that has been achieved the last four years.

“In this regard, the meeting agreed to reopen the economic sectors during the CMCO beginning 4 May 2020,” he said.

Azmin further said the federal government provided a set of comprehensive and stringent Standard Operating Procedures (SOPs) to the state governments to then apply it to all parties, noting that the SOPs was given on May 2 to state governments.

He said it was baseless to allege that the federal government restarted the economy hastily.

“These careful and prudent actions have yielded good results particularly in terms of the increase in the opening of the economic sectors without jeopardising the Government’s efforts to contain the spread of Covid-19,” he said.

He went on to say that the Malaysian government’s initiative to fight Covid-19 has been recognised as one of the best in the world, and that the national health system has sufficient capacity and capabilities to protect Malaysians’ health and to curb the spread of Covid-19.

What Azmin said about the law and the state governments’ refusal

Azmin said the federal government has implemented the MCO according to Act 342 for the effective control of the spread of the Covid-19 pandemic, with the implementation of the MCO applicable to the entire country including the states in Peninsular Malaysia, Sabah, Sarawak and the federal territories of Kuala Lumpur, Putrajaya and Labuan.

“In this regard, the Government views seriously the position taken by the various state governments in refusing to execute the decision. Their actions are not founded on lawful authority and are contrary to the policy of the federal government, all the more so in view of the fact that the federal government policy has already been made into law and enforceable throughout the country,” he argued.

Azmin further said the federal government’s regulations made under Act 342 are specific laws aimed at preventing and controlling the spread of Covid-19, adding that such regulations “prevails over the provisions of other written laws in respect of the prevention and control of infectious diseases.”

The state governments of Sarawak, Sabah, Negri Sembilan, Kedah, Pahang as well as Perak, Kelantan — had ahead of the CMCO period that started today — declined to immediately or fully apply the federal government’s decision and policies under CMCO with some citing the need for further study, while Selangor yesterday and Melaka today have since announced slightly different rules such as by still banning dine-ins at restaurants.

Penang came up with its own recovery plan, while Perlis and Terengganu reportedly agreed to implement the CMCO.

Earlier today, Johor said it would implement the CMCO, but said the actual implementation would be subject to the standard operating procedures by the respective local councils within the state. 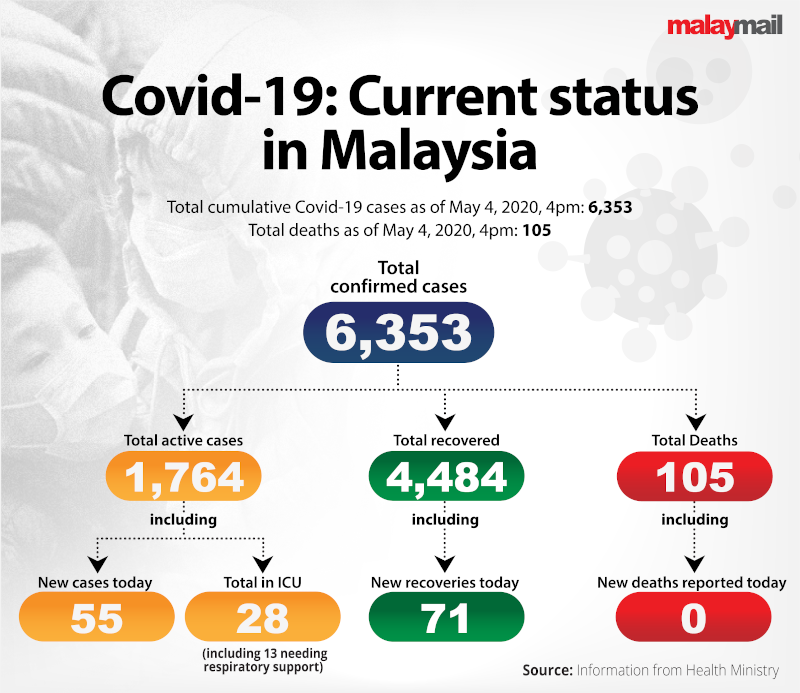