Penang Chief Minister Chow Kon Yeow speaks to reporters after launching the ‘Jom Beli Online’ platform in Komtar, George Town April 7, 2020. — Picture by Sayuti Zainudin
Follow us on Instagram, subscribe to our Telegram channel and browser alerts for the latest news you need to know.
By OPALYN MOK

The Penang lawmaker said Penang will not enforce CMCO tomorrow as announced by the federal government but had decided to do it gradually.

“Only companies that are allowed to operate during the first, second and third phase of MCO are allowed to continue operations for the next four days from tomorrow,” he said in his Facebook live message today.

He said the state will only allow several other sectors to re-open from May 8 onwards under the CMCO and finally, other sectors on May 13.

“Therefore, the MCO is still strictly in force in Penang tomorrow,” he said.

He said this means everything will be as per the MCO regulations without any changes including public transport companies.

Chow said the state decided to implement a Penang Gradual Recovery Strategy based on the appropriate steps and measures that should be taken to ensure the safety and health of Penangites.

“As for companies that were not allowed to operate during the MCO, they will be allowed to re-open in stages from May 8 onwards,” he said.

He said the state decided to shift the CMCO to May 8 to allow the state administration to prepare an overall guideline in terms of enforcement in these four days.

“These four days will also allow companies, employers and parents to plan their respective re-opening and movements including preparation of hand sanitisers, social distancing rules, face mask and others to ensure the safety of each premises,” he said.

He then listed out the three different stages under the Penang Gradual Recovery Strategy that Penang will undertake in slowly re-opening its economy and businesses for the next two weeks.

The first phase is between May 4 and 7, which Chow termed as the preparatory phase where all sectors are encouraged to use this phase to plan, prepare and implement standard operating procedures (SOP) for implementation in their respective premises.

“All other activities are not allowed except as listed clearly under the multi-stage recovery strategy schedule which will be announced soon,” he said.

The second phase, between May 8 and 12, is the adaptation phase where certain sectors are allowed to implement the SOP strictly.

The final phase, from May 13 onwards, is the re-opening phase where all sectors are allowed to operate but will still need to strictly adhere to the SOP.

“The three main aims of the strategy are to prevent crowding, to acclimatise with the SOP introduced by the National Security Council and re-opening and recovery of the economic sectors in phases,” he said.

The general rule for all Penangites during the next nine days were that the MCO is still strictly in force until May 12 so all outdoor activities, except for those going to work, are still prohibited, he stressed.

He said all sectors, except those already allowed to operate during the MCO, are only allowed to conduct preparatory works in accordance with the SOP under phase one of the Penang Gradual Recovery Strategy.

The operation hours for all sectors in Penang remained the same between May 4 and 8 as per during the MCO.

He said the operation hours for different categories of businesses along with the safety measures to follow will be announced by the local councils soon.

He called on employers to continue with the work from home method and to continue to work using virtual platforms throughout the Penang Gradual Recovery Strategy period.

“The Penang Gradual Recovery Strategy will be updated and improved from time to time and these will  be announced,” he said.

Chow said MCO could not be lifted suddenly without proper planning so the state special security committee meeting this morning decided to implement the Penang Gradual Recovery Strategy instead of following the federal government’s CMCO.

He referred to Heath Deputy-General Datuk Dr Noor Hisham Abdullah’s statement on May 2 that the first week of CMCO starting from May 4 should be used to plan, strategise and implement new SOPs by the NSC and does not necessarily mean all sectors are to start operations in full.

“During the NSC special meeting on the management of Covid-19 chaired by the Prime Minister on April 28, we were informed that the federal government will get feedback from each state on the SOP which will be distributed soon but this did not happen and the challenge is now that the CMCO starts tomorrow,” he said.

He said the state special security committee agreed on the implementation of its own strategy based on instructions from the NSC and the Health Ministry.

All districts in Penang have remained as green zones for 14 days from April 19 until May 2 except for two cases in Northern Seberang Perai, he said.

He said the state has also asked the federal government to increase the number of Covid-19 screening in Penang, to ensure border control and to implement the Covid-19 Environmental, Health and Safety protocol.

“With the introduction of the SOP by the NSC and border control, the state government is applying to the federal government, through the health ministry, to further increase the number of Covid-19 screenings in Penang,” he said.

Chow then announced the list of sectors allowed to operate from May 8 and May 13 onwards.

The list of sectors allowed to operate from May 8 onwards are:

Food (for takeaway only)

The list of sectors allowed to operate from May 13 onwards are:

“Only two sectors are still under consideration and still not allowed, education and daycare or nurseries, we will announce any further decisions on these two sectors in future,” he said.

All announcements Chow made will be available on the Penang Kawan Covid-19 website. 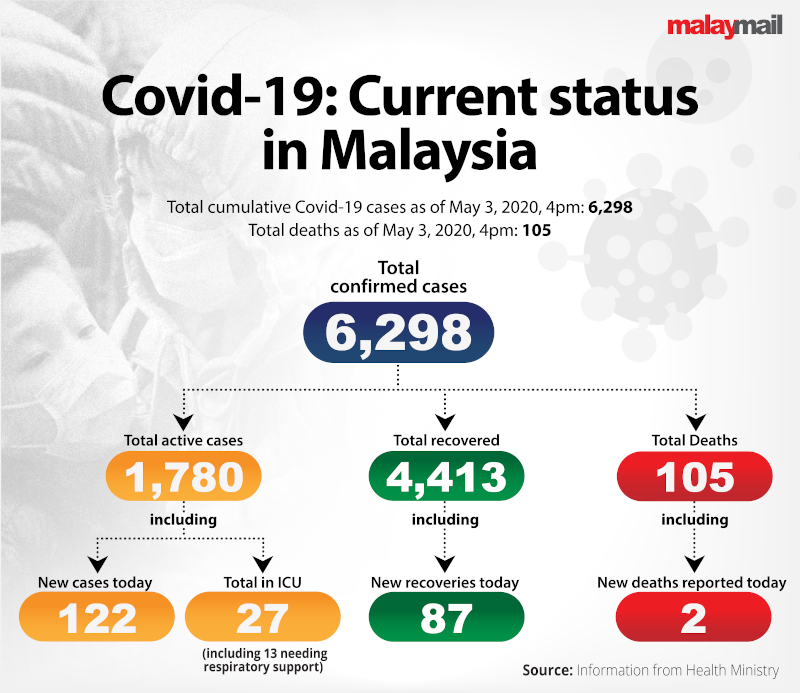