Businessman M. Kumaraguru M. Muthusamy is pictured at the Kuala Lumpur High Court February 19, 2020. — Picture by Shafwan Zaidon
Follow us on Instagram, subscribe to our Telegram channel and browser alerts for the latest news you need to know.
By IDA LIM

KUALA LUMPUR, Feb 19 — A businessman today confirmed signing several unaddressed cheques for millions in ringgit and issued these from his companies’ accounts for a former schoolmate’s use, the High Court heard today during Datuk Seri Ahmad Zahid Hamidi’s corruption trial.

Businessman M. Kumaraguru M. Muthusamy, who will be 48 this year, said the cheques were issued from his companies on the instructions of his former Perak schoolmate Junaith Asharab Md Shariff.

Kumaraguru said he had set up a company called Mastoro Kenny IT Consultant & Services under his name in 2016 on Junaith Asharab’s request, as the latter claimed to be able to obtain projects from public-listed firm MyEG Services Bhd.

He later said Mastoro Kenny never received any projects from MyEG or anyone since its formation until it closed down in 2018.

For Mastoro Kenny, Kumaraguru said he selected the company’s name and registered it to a unit owned by Junaith Asharab in Scott Garden, Kuala Lumpur, adding that this business acquaintance of around 33 years.

Kumaraguru said Junaith Asharab had sought his permission to use Mastoro Kenny’s bank account while waiting for the purported MyEG project, and that he had done as the latter requested.

Kumaraguru said he had set up a bank account for the company at RHB Islamic Bank, and handed over cheque books and the passcode for online transactions to Junaith Asharab. which enabled the latter to check and control the inflow and outflow of money from the account.

Despite being the owner of the bank account, Kumaraguru said he did not know about the amount of funds flowing in unless notified by Junaith Asharab, noting that the latter was also the one that would instruct him on the recipient and amount to be paid out for each withdrawal and cheques issued from the account.

Kumaraguru said Junaith Asharab would typically meet with him with blank cheques, which he would fill with the amount and recipient’s name before signing them and returning them to Junaith Asharab.

“Since the amount of funds written on those cheques were too large, I had asked Junaith Asharab Md Shariff about the owner of the funds and the purpose for the payments,” he said, adding that Junaith Asharab had claimed to him that the funds were “donations” to Zahid for mosque-building but had never disclosed the identity of the purported “donor”. 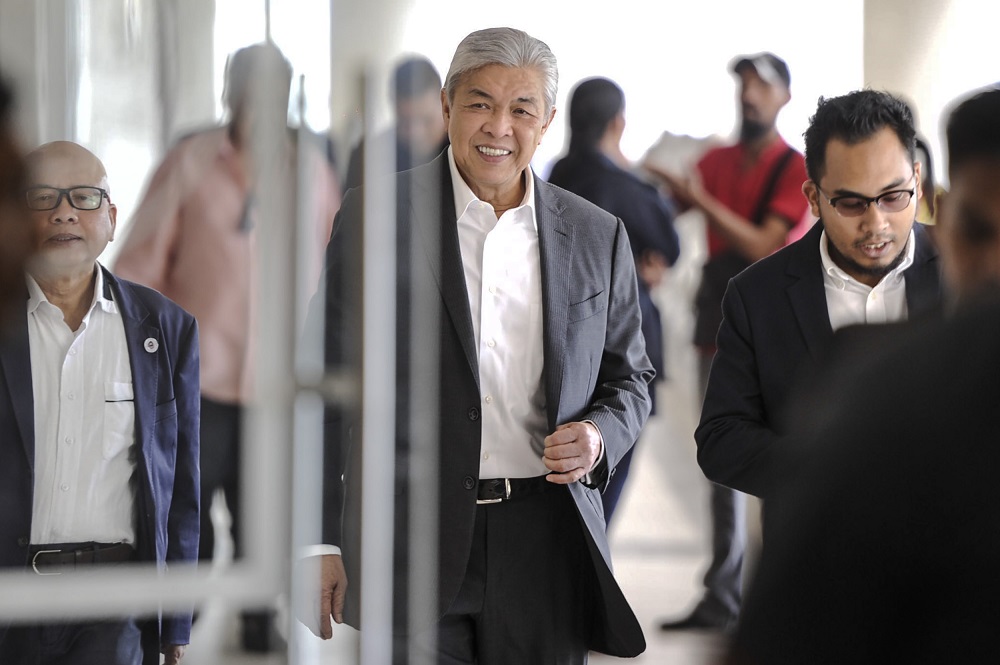 The 13 cheques with blank entries

Kumaraguru confirmed signing 13 cheques for a total of RM8 million issued from Mastoro Kenny’s RHB Islamic Bank account in 2016 and 2017, saying that these were all done at Junaith Asharab’s request in meetings called by the latter.

Kumaraguru said all the 13 cheques already had the amounts printed on them, and all were left without named recipients as instructed by Junaith Asharab. (It was revealed today that all these 13 cheques were made out to law firm Lewis & Co.)

The first series of cheques were signed by Kumaraguru after meeting Junaith Asharab when the latter contacted him on November 21, 2016, with Kumaraguru leaving the three cheques for RM1 million each undated and also without a recipient name as instructed. (He confirmed today his signature on these cheques totalling RM3 million that were now dated November 23, 2016).

Several days later, Kumaraguru said he was called to sign on four cheques for RM500,000 each, again without dating it and without naming the recipient as instructed. He again verified these cheques totalling RM2 million that were now dated November 30, 2016.)

After being contacted on January 3, 2017, Kumaraguru signed six more unaddressed cheques for RM500,000 each as instructed. He verified these cheques totalling RM3 million all dated January 5, 2017 in court today.

“I followed instructions given by Junaith Asharab Md Sharif about all these transactions as all these funds that entered into Mastoro Kenny IT & Consultant’s RHB Islamic account is not my money,” he said, adding that he did not know the purpose of these 13 payments to Lewis & Co and also confirming that his company did not have any business dealings with the law firm.

Kumaraguru said he has another company since 2011 called Jogabonito Jewellery & Diamonds that deals with Sri Lanka-sourced accessories, adding that Junaith Asharab had in June 2016 asked to use this company’s Public Bank account to issue two cheques worth RM250,000 each.

Kumaraguru said he had signed the first of these blank cheques under Jogabonito as requested by Junaith Asharab.

He signed a second unaddressed cheque and wrote the amount of RM250,000.

He verified these two cheques — which he had handed over to Junaith Asharab after signing — both now dated June 27, 2016 to Lewis & Co, adding that his company Jogabonito did not have any dealings with Lewis & Co.

When cross-examined by Zahid’s lawyer Hamidi Mohd Noh, Kumaraguru confirmed that Mastoro Kenny did not have any qualification, certification or knowledge about IT projects, but said he did not know if this meant that the company would not be able to implement any IT projects.

Kumaraguru was testifying as the 35th prosecution witness against Zahid in the latter’s trial involving 47 charges, including alleged bribery, criminal breach of trust and money laundering. 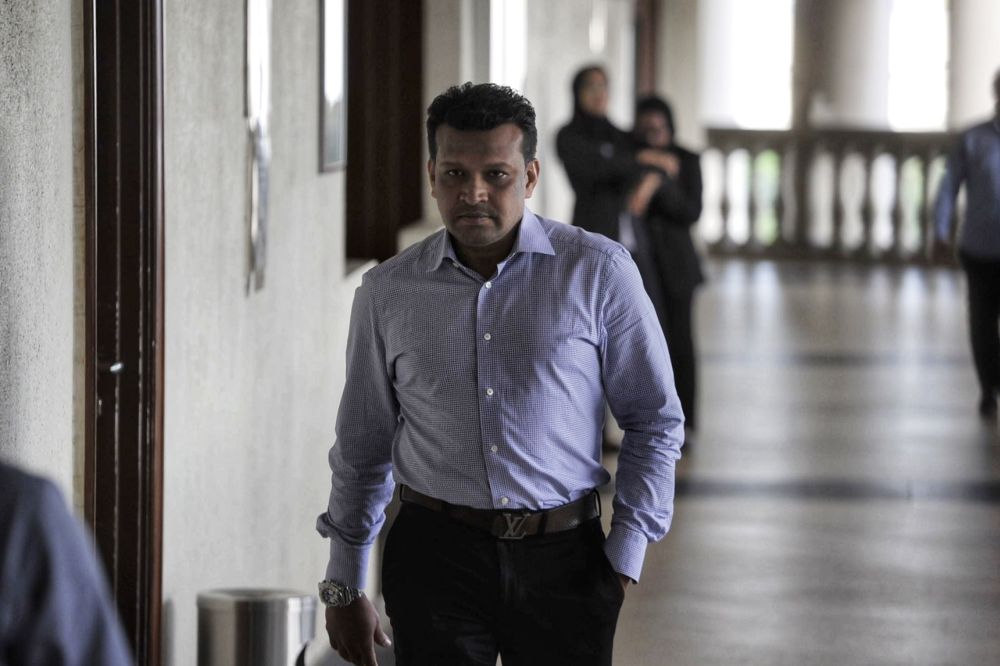 Junaith Asharab, who was the 36th prosecution witness, later confirmed that he had been introduced to Zahid by the latter’s younger brother Datuk Seri Mohamad Nasaee at a 2015 buka puasa event, adding that he had grown closer to the duo in 2016 in hopes of obtaining a MyEG project.

He said Zahid had in 2016 asked him to donate cash for the development of a RM38 million mosque and a RM100 million tahfiz centre in Bagan Datuk.

Junaith Asharab told Zahid he would donate around RM10 million as soon as possible, later saying that he had come up with this figure himself.

He also confirmed borrowing Kumaraguru’s firm Jogabonito’s account to issue two separate cheques, adding that he had handed over these two cheques without a named recipient to Mohamad Nasaee in June 2016 and in July 2016 at the latter’s Cyberjaya office.

He said the first of these cheques were due to Mohamad Nasaee allegedly seeking a RM250,000 loan with the promise of repayment in two months’ time and which was eventually repaid in cash in October 2017, but could not recall the reason for the second RM250,000 cheque given to Mohamad Nasaee.

Junaith Asharab confirmed he had in 2016 personally handed over the 13 cheques totalling RM8 million issued under Mastoro Kenny’s account and with the recipient’s name left blank to Zahid at the latter’s residence and with Mohamad Nasaee witnessing this, claiming that this was a donation for the mosque and tahfiz centre in Bagan Datuk.

He further confirmed that he had later issued 10 cheques using his own firm Berani & Jujur’s account but with the recipient’s name left blank for the same donation purpose, adding that he had personally handed the cheques for RM500,000 each or totalling RM5 million to Zahid in 2017 with Mohamad Nasaee witnessing this.

For both the 13 cheques and 10 cheques that were eventually made out to Lewis & Co, he testified that Zahid handed the cheques to Mohamad Nasaee after receiving them from him.

When asked the source of his funds, Junaith Asharab said he came from a “well-known family” and that his wife’s family was “wealthy.”