KUALA LUMPUR, Nov 22 — Putrajaya must do its best to persuade each state’s Islamic authority to eradicate child marriage as it has no jurisdiction over Shariah laws, urged several experts on the matter.

Following revelation that seven states have refused to amend its laws on the issue, Children’s Commissioner Datuk Noor Aziah Mohd Awal said that Putrajaya can legislate so states raise the marriage floor age to 18 years, but it would only apply to non-Muslims.

“This is since Islamic laws fall under state jurisdiction, with state religious councils headed by their respective Rulers,” the National Human Rights Commission of Malaysia (Suhakam) commissioner told Malay Mail.

“However do note that although Muslims under 18 can marry, they can only do so by applying to the Shariah court for permission beforehand.”

Noting that Selangor has the most stringent requirements when it comes to under-18 marriages for Muslims, Noor Aziah said in most cases the Shariah judge may request a medical report on the applicants’ capabilities in contracting the marriage.

“So although the other states have not yet raised the minimum marriageable age to 18 years for Muslims, they are currently using the standard operating procedures drafted by the Department of Shariah Judiciary. 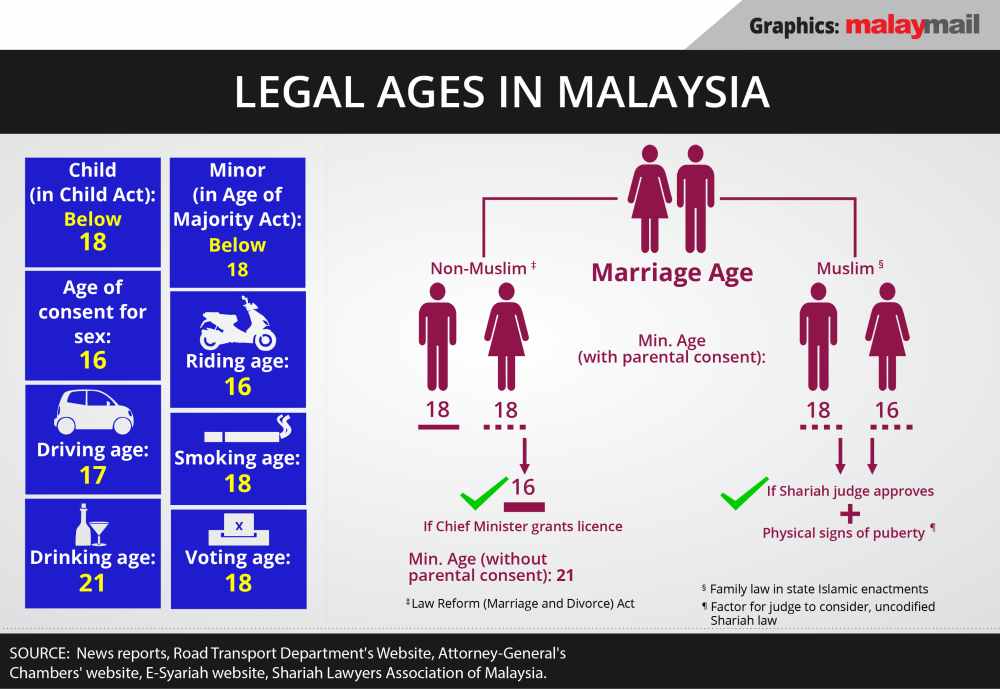 “In the event that a marriage has been properly solemnised, it can be annulled by the Shariah Court if the under-aged wife applies on grounds of a lack of consent, or if the husband pronounces ‘talaq’,” she said.

Talaq ― or talak as it is spelled locally ― is a type of divorce in Islam which provides the man an avenue to initiate a divorce through simply pronouncing the word.

Noor Aziah’s views were echoed by Malaysian Bar president Datuk Abdul Fareed Abdul Gafoor, who asserted that the federal government has to engage all parties who object to raising the minimum marriageable age.

“The government should take all necessary steps to engage with the states and understand their rationale for their objections, and convince the states to agree to banning of child marriage in the best interest and welfare of the child,” said Abdul Fareed, who is also the co-chairman for the Bar’s Child Rights Committee.

Presently only Selangor has amended its state enactment to this effect, while the Federal Territories is currently in the process of amending it. Johor, Melaka, Penang, Perak, and Sabah have consented to do so.

Following her remark, women’s rights groups such as Sisters in Islam (SIS) and All Women’s Action Society had urged Putrajaya to step in, as it is a critical national issue.

SIS also had asked if the Children’s Commissioner was included in drafting the National Strategic Plan to tackle the issue, to which Noor Aziah divulged to Malay Mail that her recommendations will be featured when the document is released next month.

“To properly address child marriage, the government must also address the root causes which includes education and poverty, and also societal norms regarding girls’ sexuality and virginity,” she said in a statement to Malay Mail yesterday.

The commissioner of the International Commission of Jurists said any holistic plan to address child marriage ought to include programmes to engage with communities on these issues, which she said can commence immediately.

“Some child marriages occur in Malaysia due to teenagers becoming pregnant and the young couple marrying to avoid the baby being declared illegitimate, which has legal consequences in relation to inheritance rights.

“The laws regarding illegitimacy must therefore also be reviewed to ensure that families do not feel pressured to compel their children to marry before they are ready,” said the former Bar president.

Ambiga said there are immediate legislative steps within the federal government’s power that can be possibly taken, such as the removal of the marriage exception to statutory rape in Section 375 of the Penal Code, which had earlier been suggested by Institutional Reforms Committee legal support team member Andrew Yong.

“Its removal, with an amendment to provide for ‘Romeo and Juliet’ type cases where both individuals are teenagers, will at the very least provide protection to girls under 16.

“The Penal Code falls within the purview of the Federal Government (Federal list) and therefore there is no impediment to the government proceeding immediately to amend the law,” she said.

Minister in charge of Islamic affairs Datuk Mujahid Yusof Rawa said this week that Putrajaya will bring the matter up with the Conference of Rulers, since each state will have to adhere to the Rulers’ decision should they decree for the ban.

He said the government can also try to convince the states to ban child marriages through the National Islamic Affairs Council which meet thrice a year.