According to the police, Dr Zakir Naik will not be allowed to speak publicly at a two-day Muslim camp in Perlis scheduled to start tomorrow. — Bernama pic
Follow us on Instagram, subscribe to our Telegram channel and browser alerts for the latest news you need to know.
By DEBRA CHONG

The Star reported state police chief Senior Assistant Commissioner Noor Mushar Mohd saying that action will be taken against the divisive India-born preacher if he proceeds.

“Zakir can come to Perlis, but he can't talk and action will be taken against him if he does so,” the senior policeman was quoted telling a news conference in Kangar.

According to the report, a 10-day notice to the police is required for future talks featuring Dr Zakir, and must include the topic.

“We are a multi-racial country and the sensitivities of others have to be taken into consideration,” Noor Mushar Mohd was quoted saying further.

“For the benefit of Zakir and his family, this department would like to advise you to excuse him and his family from the Malaysia Reverts Camp 2019.

“This is to ensure that he and his family are not disturbed due to issues raised by those with ill intentions,” Asri was quoted saying in his letter.

The camp called Malaysia Reverts Camp 2019 is to be held in a mosque in Kuala Perlis from tomorrow until Sunday.

Dr Zakir, his wife Farhat, son Fariq, and daughters Zikra and Rushda were scheduled to speak in gender segregated sessions at the camp.

Other speakers included the organiser Zamri Vinoth who is also Dr Zakir’s protege and was recently arrested for allegedly insulting Hindus in a religious lecture; Multiracial Reverted Muslims founder Firdaus Wong Wai Hung who recently caused charity group Who is Hussain? to receive death threats after he accused them of spreading Shiah teachings; and controversial columnist Ridhuan Tee Abdullah.

Dr Zakir is under investigation for provocation stemming from his remarks about Malaysia’s minority communities during an event in Kelantan last week.

Federal Criminal Investigation Department director Commissioner Datuk Huzir Mohamed confirmed the probe under Section 504 of the Penal Code for intentional insult with intent to provoke a breach of the peace. 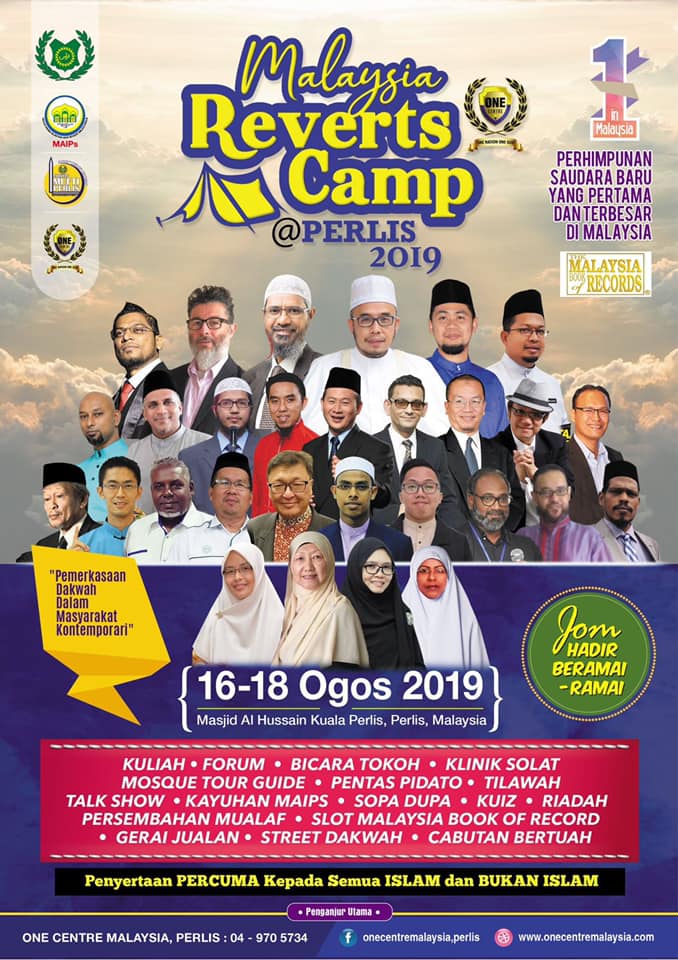