Zahid was hit yesterday with seven counts of receiving bribes totalling S$4.24 million (RM12.91 million) and was additionally charged today with receiving bribes of S$10.47 million, RM3.13 million, €15,000 and US$15,000 from a company contracted to operate Malaysia’s overseas visa system and a one-stop centre in China while he was home minister.

This means Zahid, who is currently on leave as Umno president, has now overtaken former Sabah chief minister Datuk Seri Musa Aman (51 charges) as the BN leader with the most criminal charges at the moment.

As for the other high-profile individuals charged within Pakatan Harapan’s first year in power, the number of charges against them range from one to 12 counts. 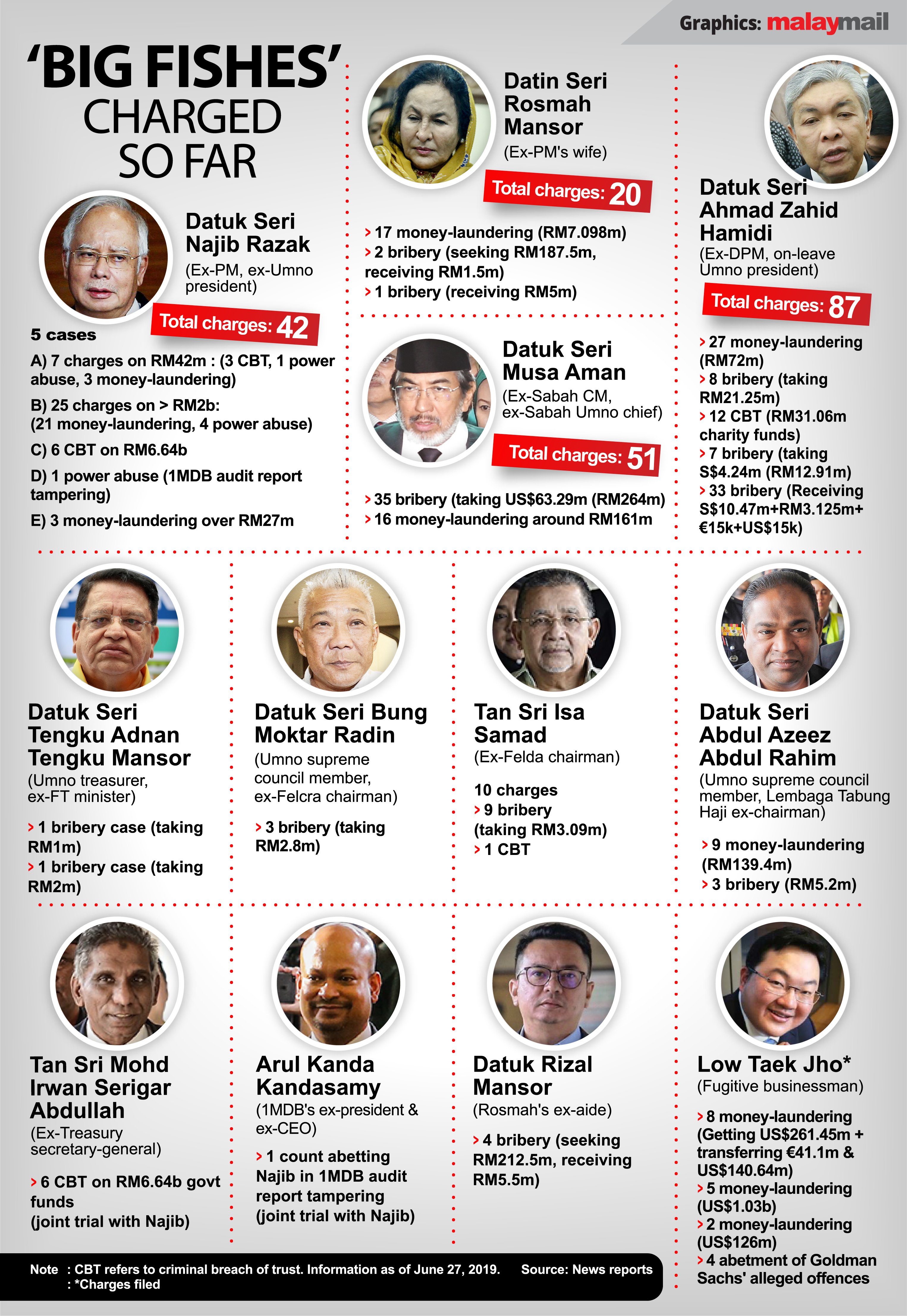 For now, however, Najib still leads in terms of the bail amount posted, having put up a total of RM6 million so far for all his cases.

Rosmah has also posted a total of RM3 million in bail.

Zahid posted RM200,000 bail for his new bribery case yesterday and another RM500,000 for the one today, bringing his total to RM2.7 million.

(Bail allows those charged to be released from custody pending the conclusion of their trials and is meant to ensure the accused shows up in court for proceedings. The bail amount is fixed at the court’s discretion.) 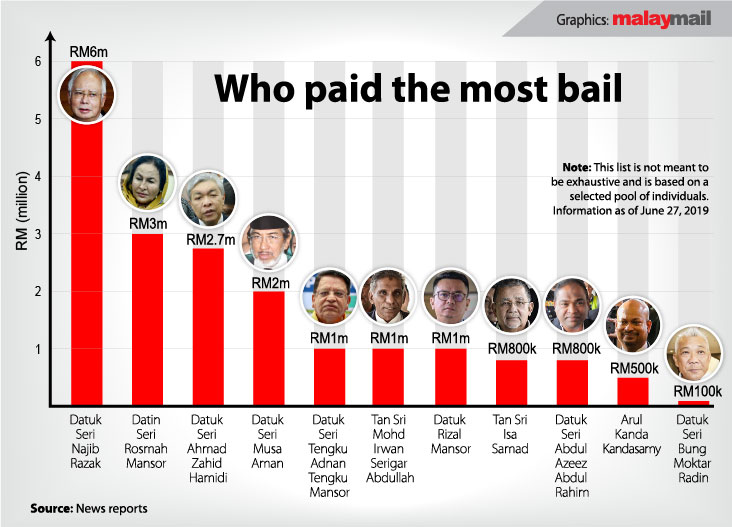 For those wondering when Zahid and the other prominent individuals were charged, here’s a quick refresher: 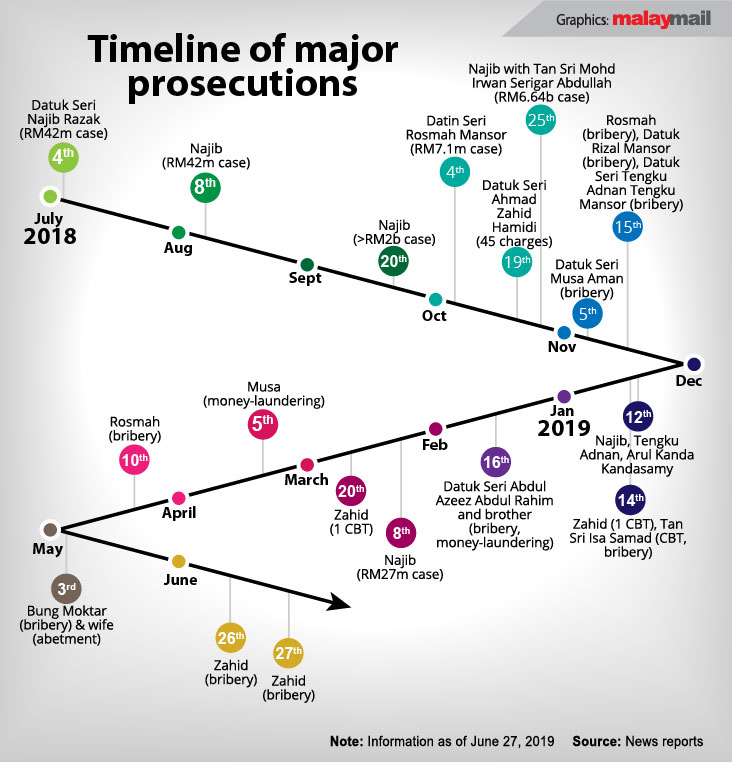 Of these, only one of Najib’s cases has gone for trial.

His trial involving seven counts of power abuse, criminal breach of trust and money-laundering in relation to RM42 million of SRC International Sdn Bhd’s funds is ongoing and will resume next Monday.

Trial dates have also been fixed for Najib’s other cases in court, stretching from this August until June next year. 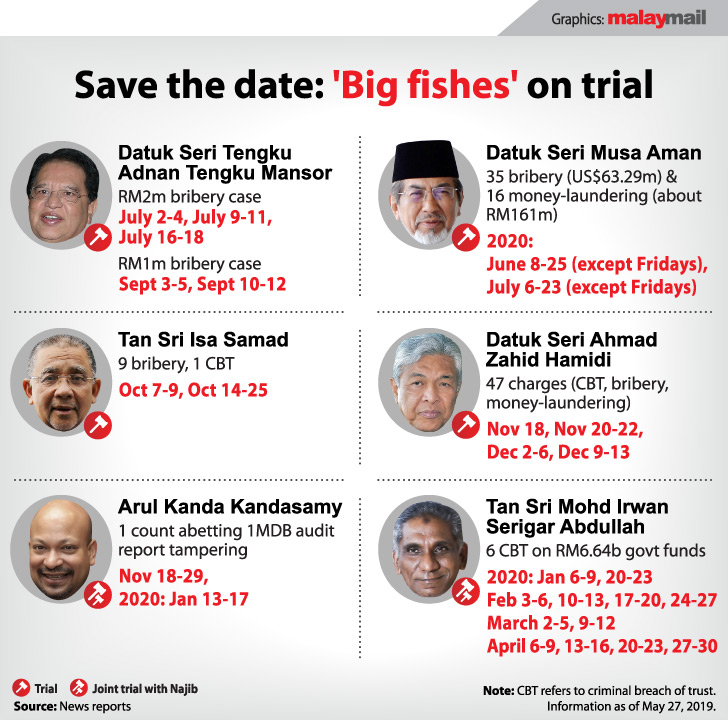 Rosmah’s cases are scheduled to go on trial next year, with trial starting from next February and next May: