The IPCMC: What you need to know, and why it matters now more than ever

KUALA LUMPUR, April 5 — The explosive findings of an inquiry released on Wednesday that implicated the police in two abduction cases has renewed calls for the government to form the Independent Police Complaints and Misconduct Commission (IPCMC).

Witnesses who testified at the National Human Rights Commission (Suhakam) inquiry last year alleged they were bundled up into a vehicle by men in balaclavas in broad daylight, in two separate but identical operations.

Koh was abducted in 2017 and Amri the year before.

The Special Branch is the Royal Malaysian Police’s elite intelligence unit that critics allege operate like the Soviet Secret Police.

Groups like the Society for the Promotion of Human Rights (Proham) and G25, pro-moderation former civil servants, said the findings underscored the frightening need to curb police power and hold them accountable, which only a powerful and independent oversight can do.

How calls for the IPCMC came about

The proposed IPCMC was among the 125 recommendations made by a Royal Commission of Inquiry formed in February 2004 following public uproar over a growing number of deaths in detention and police brutality claims.

The inquiry was mandated and tasked “to study and recommend measures to improve police efficiency, to make the force more effective in modern law enforcement and to turn the force into a respected and formidable enforcement body”.

As the inquiry commenced, the bipartisan panel received over 900 complaints of abuse that included deaths in custody, physical and psychological abuse of detainees and misuse of administrative detention laws, according to news reports.

The panel also found widespread power abuse within the force and a systematic lack of accountability and transparency.

The panel in its recommendation explained:

“When officers act in contravention of laws and regulations without fear of investigation or reprimand, the culture of impunity begins to develop. Each wrongdoing that is not investigated or punished or is supported by higher ranks within the police leadership, leads to the perception that such misconduct is permissible.”

And for it to be effective, the body must be independent. The RCI had initially recommended that the IPCMC be placed under direct Parliament authority, but lawmakers from the ruling Barisan Nasional coalition at the time had opposed the idea.

Is there an IPCMC now?

No. After 14 years, the proposed commission remains but an idea.

Instead what had come in its stead is the Enforcement Agency Integrity Commission (EAIC), formed during the Tun Abdullah Ahmas Badawi administration in what critics described as a “cosmetic” move that pandered to police pressure.

Close to the proposed IPCMC, the EAIC oversees the disciplinary conduct of all enforcement officers. But while it has the power to conduct investigation, it cannot prosecute and can only recommend action.

So the IPCMC became a key campaigning issue for the Opposition at the time and remained so up until it won last year’s 14th general election. Pakatan Harapan said it would form the IPCMC once in power.

But almost a year since, the status of the proposed commission is still unclear. Different  PH leaders have given varying and almost conflicting statements on whether or not the IPCMC will materialise.

Can we still expect the IPCMC?

It’s very much up in the air. While the Suhakam findings may have revived interest, PH leaders have been in a muddle and have yet to give a definitive answer.

But at the moment, rights groups are trying to exert pressure. For now, there is renewed pressure and reminders for the new government of its reform commitments, the IPCMC among them. 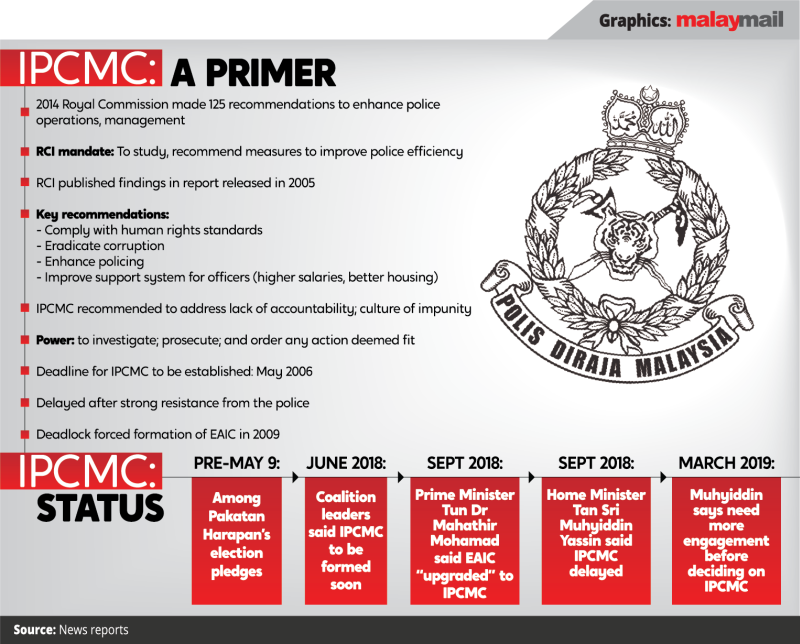