PUTRAJAYA, March 28 — Malaysia-born Roisah Abdullah, who is the ward of a federal minister, received her citizenship today after years of waiting to be recognised as a Malaysian.

Roisah, who will turn 22 next month, called today’s news an early birthday present.

“Yup, yes, absolutely, this is truly a big gift,” she told reporters here.

Roisah repeatedly expressed her gratitude and excitement at finally getting her citizenship.

For Roisah’s long journey from a stateless child under the care of Malaysians to finally becoming a citizen in her own right, she had to apply twice for the privilege.

Roisah was born in 1997 in Klang to a Malaysian father and non-Malaysian mother who did not register their marriage, which eventually resulted in her being stateless based on the government’s stand on local laws.

Her initial birth certificate’s validity was only disputed in 2010, forcing her to get a fresh birth certificate via late birth registration as part of the process for her to eventually be a citizen.

Her first citizenship application in 2013 was rejected five years later in January 2018, leading to her having to apply on March 21, 2018 just a month before her 21st birthday.

This is crucial as both her citizenship applications were under Article 15A of the Federal Constitution, which has an age limit as it grants the government special powers to register only those below the age of 21 as citizens in “special circumstances as it thinks fit”.

The citizenship approval today is on her second application.

She faced many difficulties due to the government’s previous refusal to recognise her as a citizen, such as not being to participate in interschool sports contest at the district level as she did not have an identity card.

“When I wanted to open a bank account, I couldn’t. If I want to go to a clinic, I have to go to a private clinic, which is expensive,” she said, adding that she also could not apply for a driving licence.

PKR activist S. Sathiyamurithe, who has acted unofficially as her guardian and assisted her in citizenship applications since Roisah was 13, had paid an annual levy of RM240 to the Education Department for her to be allowed to attend secondary school as a “foreign student”.

Roisah was consistently a top-scoring student, achieving 4As and 1B in her UPSR, straight 9As in PMR, 7As, 1B and 1C in SPM, and 3As and 1B in STPM.

She was even recognised by her school SMK Sungai Kapar Indah as its best-scoring STPM student of 2017.

Despite such results, Roisah knew she could not enrol in public universities without an identification card and had given up hope on pursuing studies there. Her public university of choice Universiti Utara Malaysia had offered her a spot last March but she had yet to be recognised as Malaysian then.

Roisah is now in her third semester of studies for a four-year Accounting degree at Universiti Tun Abdul Razak (UniRazak), which awarded her a full scholarship last year.

Roisah, who wants to be an accountant when she graduates, already has plans for what she wants to do first after obtaining her identity card.

“When I get an IC, I want to open a bank account, get a driving licence, get an LRT card.”

Roisah was at the Home Ministry’s headquarters together with her legal guardian, Housing and Local Government Minister Zuraida Kamaruddin, to receive the approval letter for her citizenship application filed last March.

Zuraida told reporters the Home Ministry actually approved the citizenship application in October 2018 but she had not received the approval letter.

Zuraida said Roisah and Sathiyamurithe then followed up with the Home Ministry, which yesterday told them to collect the letter with the government’s decision today.

When contacted, Latheefa told Malay Mail that Zuraida was present on March 21, 2018 when Roisah had gone to the Home Ministry to get her citizenship status resolved.

Latheefa said the Home Ministry had asked Roisah then to apply for the second time for her citizenship via a Malaysian guardian, and Zuraida had on the spot agreed to be named as her guardian to facilitate the process.

At that time, Roisah’s adoptive Malaysian mother Satra Nabowah had already been dead a few years.

Zuraida was then an opposition federal lawmaker, and was only named a minister in May 2018 after the Pakatan Harapan coalition she was in won federal power.

Today, Zuraida said she chose to help Roisah by stepping in as her guardian because the latter was denied citizenship and entry into public universities despite being a “genuine” case and achieving good results.

“But I think the government is trying to do something with these stateless children, with genuine, born Malaysians, I think they are doing massive operations so we can clear this issue once and for all, especially in the states of Sabah and Sarawak which is very rampant.

“But in Peninsular, there are such cases but it’s not rampant, it’s not a lot, but I think in Peninsular the cases are very genuine, so I think there must be a process where we can do fast-track for these people,” she said when commenting on the nationwide problem of stateless children or children without nationality. 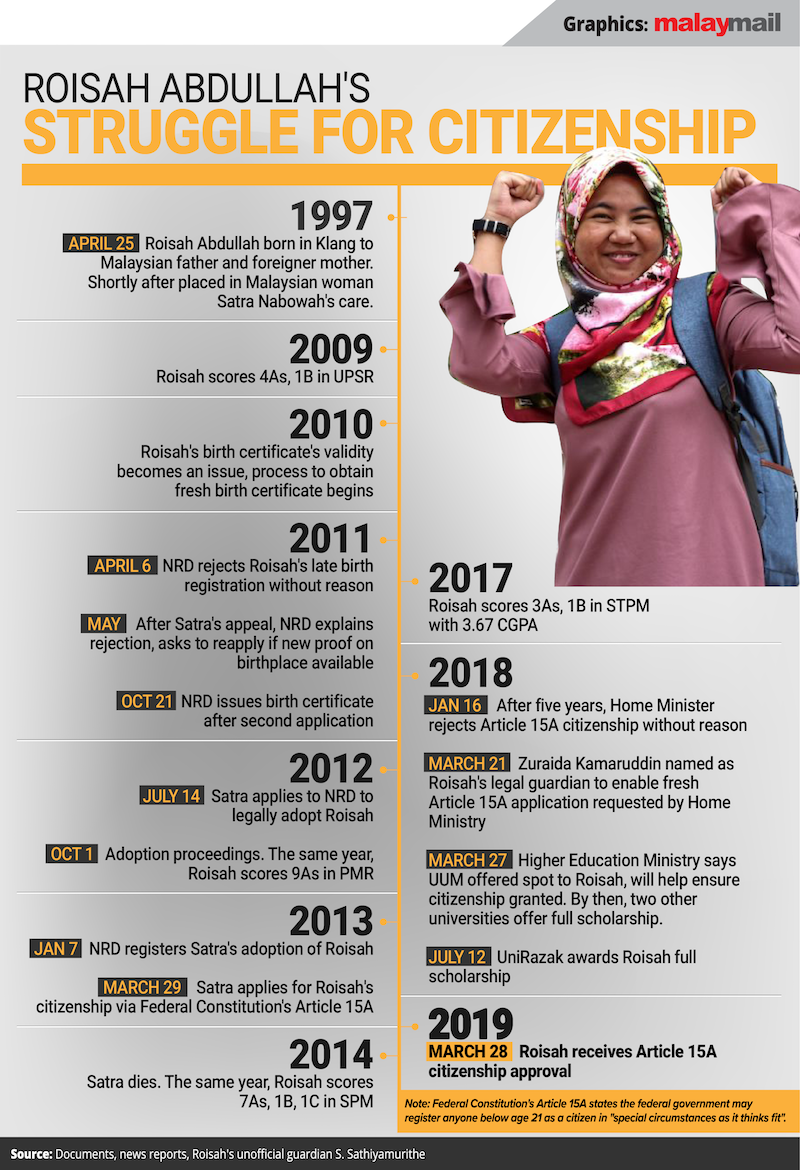