By Ida Lim and Sharina Ahmad

KUALA LUMPUR, Sept 4 — As Malaysia continues to toy with the old idea of having a soda tax, other neighbours in the Southeast Asia region have gone ahead with it to encourage a healthier lifestyle.

The tally shows half of the 10 Asean countries already impose taxes on sugary drinks, while the remaining five (including Malaysia) are mostly still considering introducing such a tax.

Despite the Malaysian government's proposal for a soda tax however, it also decided to lower the ceiling price for sugar by 10 sen/kg from September 1.

Here’s a quick look at how we and our neighbours have done:

On January 1, 2018, taxes on sweetened beverages through a new law also known as Tax Reform for Acceleration and Inclusion (TRAIN) kicked in.

The tax is imposed at either six pesos (RM0.46) per litre for drinks that were sweetened with either just sugar or just artificial sweeteners (e.g. aspartame, sucralose, aspartame potassium) or both; or at a rate of 12 pesos (RM0.92) per litre for drinks sweetened with just high fructose corn syrup or in combination with sugar or artificial sweeteners.

According to Borneo Bulletin, such a tax rate increases the price of a can of drink by 13 cents.

Aside from introducing taxes for high sugar content drinks, Brunei also rolled out a 3 per cent tax for sugar and cocoa products, as well as 30 per cent tax on food flavouring product monosodium glutamate (MSG).

On September 16, 2017, a new excise tax system kicked in in Thailand, along with new higher tax rates for sugary drinks that will go up gradually over a six-year period.

For Laos, reports by major tax and accounting consultancy firms state that a tax rate of between 5 to 10 per cent is imposed on soft drinks, sugary drinks, fruit juices and energy drinks.

Cambodia's Ministry of Economy and Finance's General Department of Taxation website states that a 20 per cent tax is imposed on soft drinks, along with alcoholic products and beer, while cigarettes are taxed at 15 per cent. 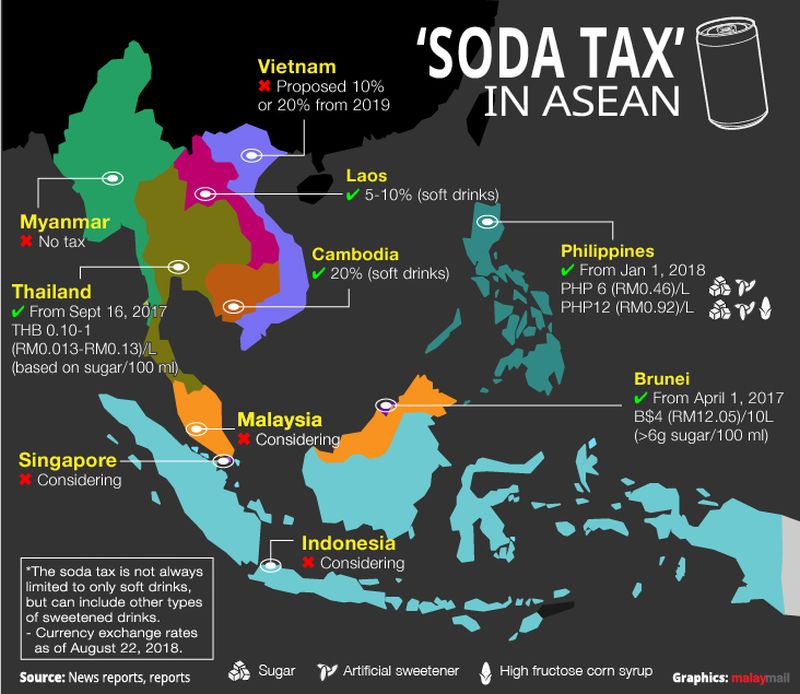 No tax but mulling

On August 15, 2017, Vietnam's Finance Ministry revived the idea of a special consumption tax for a wide range of sweetened beverages from 2019 onwards at a proposed rate of 10 per cent or 20 per cent. Subsequent news reports have put the proposal at a more likely rate of 10 per cent, on top of a 12 per cent value added tax (VAT).

Although Singapore does not have a sugar tax yet, it has launched a war against diabetes and its health ministry had on August 22, 2017 announced that seven key drinks manufacturers had committed to limiting the sugar content in their drinks sold in Singapore to a maximum 12 per cent by 2020.

With the seven companies ― Coca-Cola, F&N Foods, Malaysia Dairy Industries, Nestle, PepsiCo, Pokka, and Yeo Hiap Seng ― accounting for 70 per cent of packaged sugar drinks in Singapore, the ministry said this could cut sugar consumption by around 300,000 kg per year.

Singapore’s health ministry also said that an anti-diabetes task force was studying various measures such as a sugar tax, warning labels and restrictions on advertising on sugar-sweetened drinks with high sugar content.

In June, Singapore Health Minister Gan Kim Yong indicated in an interview that a sugar tax on packaged drinks could be on the cards.

The government abolished a sugar subsidy of 34 sen per kg on October 26, 2013 via the Budget 2014 announcement, while the Health Ministry was repeatedly reported in subsequent years and as early as 2015 to be mulling a tax on sweetened drinks.

The deputy health minister said in 2016 that the proposal was subject to the Finance Ministry’s approval, while the government was reported in late December 2017 to be planning a tax on sweetened drinks as part of 13 health policies, but the health ministry later said there were no plans to implement it.

The soda tax proposal was revived again recently by the Finance Minister’s special officer Tony Pua, while the Domestic Trade and Consumer Affairs Minister Datuk Saifuddin Nasution Ismail had said it is a good idea and worth considering.

Under the National Plan of Action for Nutrition of Malaysia III (2016-2025), the government targeted to introduce by 2020 a tax on unhealthy food and beverages including sweetened creamer, condensed milk and sugar-sweetened beverages such as carbonated drinks, with the lead agency for implementation to be the Finance Ministry aided by the Health Ministry, Customs Department and food industries.

Available reports have not shown Myanmar to be considering a specific tax on soft drinks.

Prior to the Myanmar government's lifting on December 10, 2011 of import bans on five food products including soft drinks, the country already had locally-produced soft drinks.

Major soft drink firm Coca-Cola sent its first shipment of soft drinks to Myanmar in September 2012 after six decades and later inaugurated a bottling plant there as part of its planned investment in the country, while its rival Pepsico also made arrangements the same year to bring it its products.