Marginal seats to watch out for in GE14

According to data collected by non-governmental organisation ENGAGE, the party will defend the bulk of marginal seats against rivals Pakatan Harapan (PH) and PAS, who will attempt to hold onto nine and seven such seats respectively.
The NGO describes marginal seats as those won with a majority of 5 per cent or less; there are currently 43 such seats.
Of these, Sungai Besar and Kuala Kangsar are unique. BN held both the seats in 2013 with a slim majority but in the 2016 by-elections, the party dramatically expanded its majority in both.
The key battleground states are expected to be Kedah, Perak and Johor, currently held by BN and the Opposition-held states of Selangor and Penang.

Rafizi Ramli, who heads think-tank INVOKE, had in March predicted the Opposition would capture Kedah, Johor and Perak while retaining Selangor and Penang.

However, political and economic analyst Hoo Ke Ping said the departure of PAS from the Opposition coalition would substantially impact the ability of Opposition coalition Pakatan Harapan (PH) to retain its marginal seats, especially in three-cornered fights where the party would draw between 20 to 30 per cent of votes, potentially giving BN an edge.

“Only Selangor can swing. The Opposition is well entrenched in Penang but PH will not likely make gains in Johor, Perak and Kedah which will remain with BN as the momentum of Chinese voters has died down after the two ‘tsunamis’ in 2008 and 2013.”

On the racial make-up of seats playing a role in voter decisions, Universiti Kebangsaan Malaysia Associate Prof Kartini Aboo Talib said race or ethnicity will always be in Malaysian politics but other issues carry weight as well.

She said other indicators on voting trends that have emerged include personality politics, intra-ethnic issues and state versus federal issues.

“Our political parties are ethnic-based thus ethnic politics is the foundation here,” she said. 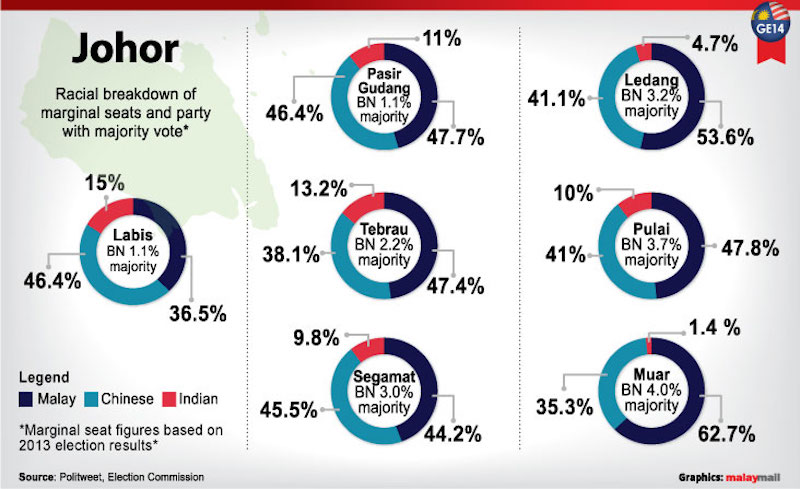 The birthplace of Umno has been a traditional stronghold of the party with BN taking 20 out of the 26 parliamentary seats in 2013.

Of these, seven are considered marginal: Labis, Pasir Gudang, Tebrau, Segamat, Ledang, Pulai and Muar which were won with majorities of 1.1 per cent to 4 per cent.

The closest, Labis, is a Chinese majority seat and DAP is expected to contest the seat again after losing the seat by a mere 353 votes to MCA in 2013.

Pasir Gudang, which PKR lost to BN by 935 votes, is relatively new as it was created in 2004 and is a Malay majority seat.

The BN manifesto “Johor Team For A New Decade: Pledges for the Future”, containing 230 pledges for the people of Johor, attracted controversy as Johor Amanah had unveiled a similar manifesto with water supply, housing and economic matters being the key promise to voters.

The major difference between the two camps is the PH pledge to impose a two-term limit on the Mentri Besar’s post. 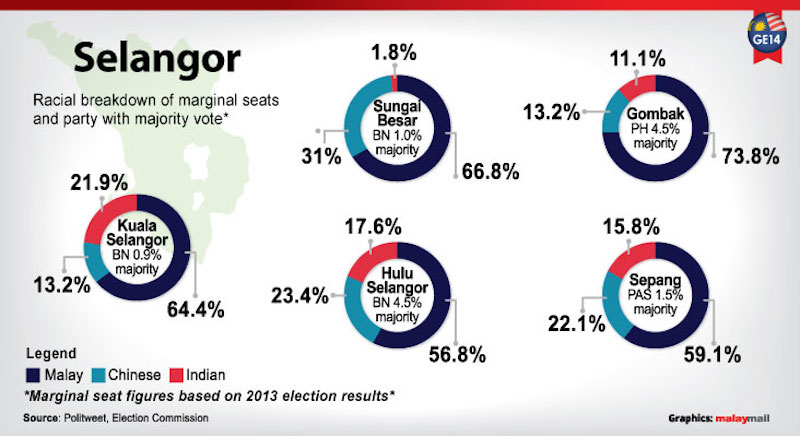 Selangor has been in Opposition hands since 2008, with BN expected to put up a fierce fight over the state with Prime Minister Datuk Seri Najib Razak calling on BN Selangor to work hard so the state “will not fall to the Opposition for the third time in a row.”

Of those, five are marginal with three — Kuala Selangor, Sungai Besar, Hulu Selangor — held by BN and won with majorities of between 0.9 per cent and 4.5 per cent.

The remaining two are split between PH, which retained Gombak, and Sepang which PAS seized from BN in 2013.

Tindak Malaysia (TM) mapping adviser Danesh Prakash Chacko said Hulu Selangor, which BN held in 2013 in a four-cornered fight with PKR and two independents, would be affected by the recent redelineation exercise by the Election Commission..

“Using publicly available political preference information, combined with the latest ethnic and seat type, plus political preferences of advance voters we project that several seats will be affected including Gombak, Ampang, Shah Alam and Kota Raja.”

But this advantage could be offset by a lack of consensus between BN component parties in the state over certain seats, most prominently Wangsa Maju which was “fought over” by both MCA and Umno. (MCA has been given the seat to contest in GE14.)

Sungai Besar which BN held in 2013 with a majority of 399 votes saw a boost in the 2016 by-election with the party hugely expanding its majority to 29 per cent but it remains to be seen if the party can retain its momentum.

BN, PH and PAS have launched their manifestos for the state with all sides emphasising economic growth in Malaysia’s most prosperous state besides women’s rights, health and infrastructure following close behind. 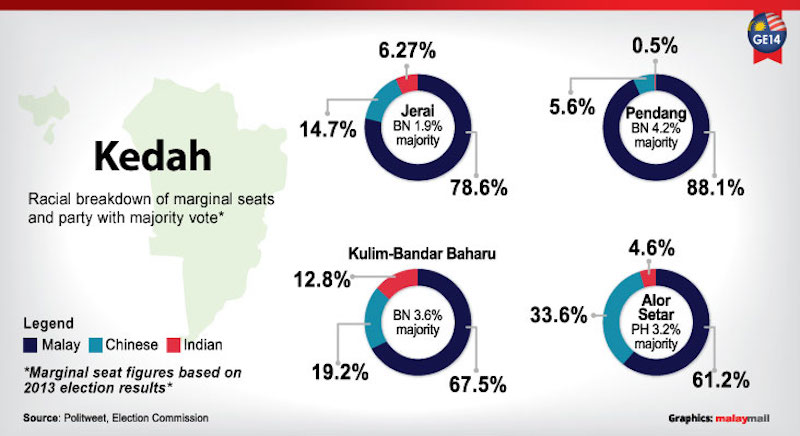 The fielding of Tun Dr Mahathir Mohamad and his son Datuk Seri Mukhriz Mahathir — both of Parti Pribumi Bersatu Malaysia (PPBM) — is expected to spearhead a fierce contest for the 15 parliamentary seats in the state.

BN took Jerai and Pendang from PAS with a majority of 1,196 votes and 2,638 votes respectively and seized Kulim-Bandar Baharu from PKR with 1,871 votes.

Meanwhile PKR seized Alor Setar from BN in a multi-cornered fight with a majority of 1,873 votes.

Jerai, with the narrowest margin, is a rural Malay-majority seat with Chinese and Indians combined making up a minority of just over 20 per cent while Alor Setar, the state’s capital, is more mixed and urbanised.

PAS claimed the state BN had “plagiarised” its manifesto while the latter had called the manifesto unveiled by PH weak.

The Islamist party said it is going to undo the “evils” committed by Tun Dr Mahathir Mohamad who will be running in Langkawi.

Having been held by the Opposition since 2008, Penang will see BN attempt to win some of the 10 seats held by PH versus its current three.

Of those, Balik Pulau was captured by BN from PH component PKR in 2013 with a majority of 1,539 votes while other seats remained firmly in Opposition hands with majorities of between 16 per cent (Permatang Pauh) and 82 per cent (Bukit Gelugor).

Malay-majority Balik Pulau has a sizeable Chinese minority; the seat has stayed in BN hands since 1974 with the exception of 2008 and it was regained in 2013 with a 1,539-vote majority.

On manifestos, BN and PH are at odds with the former promising to scrap several developments including the controversial undersea tunnel and various efforts at flood mitigation while the latter has accused BN of “copying” its social welfare initiatives.

Perak fell into Opposition hands in 2008, but was retaken by BN when three of their MPs defected to BN the following year.

BN holds 13 Parliamentary seats in the state with PH holding another 9 and PAS and PSM holding one each.

Three of those seats are considered marginal: Bukit Gantang, held by PAS since 2008, is shaky with the party retaining the seat with a majority of only 1.6 per cent of votes in 2013.

BN held Kuala Kangsar with a 3.8 per cent majority during the 2013 general election but this was increased to 29.9 per cent in the 2016 by-election.

Both are Malay-majority seats with substantial numbers of Chinese and Indian voters who make up over 30 per cent of voters.