Civil rights lawyer New Sin Yew said the government's Anti-Fake News Bill 2018 uses the contradictory term of “fake news”, pointing out that a content that is fake cannot be news.

He also said that “fake news” has now encroached into a citizen's private domain; contrary to popular belief that “fake news” only deals with situations “where a mass amount of people are misled by a falsehood presented as the truth”.

“The definition under the Bill is ridiculously broad, it includes even private text messages between individuals that may contain inaccurate information. Read with the offence under Section 4, it effectively makes lying an offence,” he told Malay Mail when contacted yesterday.

Section 4 of the proposed Anti-Fake News Act 2018 makes it a crime to knowingly create, publish, distribute or circulate fake news, with the offence punishable by a maximum RM500,000 fine or maximum 10-year jail term or both.

“It catches everyone, even normal citizens like you and me. If I send you a private text message which I know contains information which is inaccurate, I would have committed an offence under the Act regardless of my intention,” he added when saying the proposed law was open to abuse.

New said existing laws are already stringent enough in dealing with situations where the public is being alarmed with false information, such as the Penal Code's Section 124I which is punishable by a maximum five-year jail term.

“The main problem with fake news is that existing legislations do not impose adequate obligations on social media network operators to combat ‘fake news’ nor does it provide for a complaints mechanism for victims of ‘fake news’ remedy the damage done to them,” he said.

Noting that victims of “fake news” could currently either file a lawsuit for defamation or lodge a complaint with regulator Malaysian Communications and Multimedia Commission (MCMC), he said both existing options were “not effective remedies because it either takes too long or is too costly”.

“The new law needs to address this which at present it does not.

“Instead of dealing with how to curb ‘fake news’, the government has done a botched up job of drafting a piece of law that is overly broad and oppressive that does not deal with the problem,” he said. 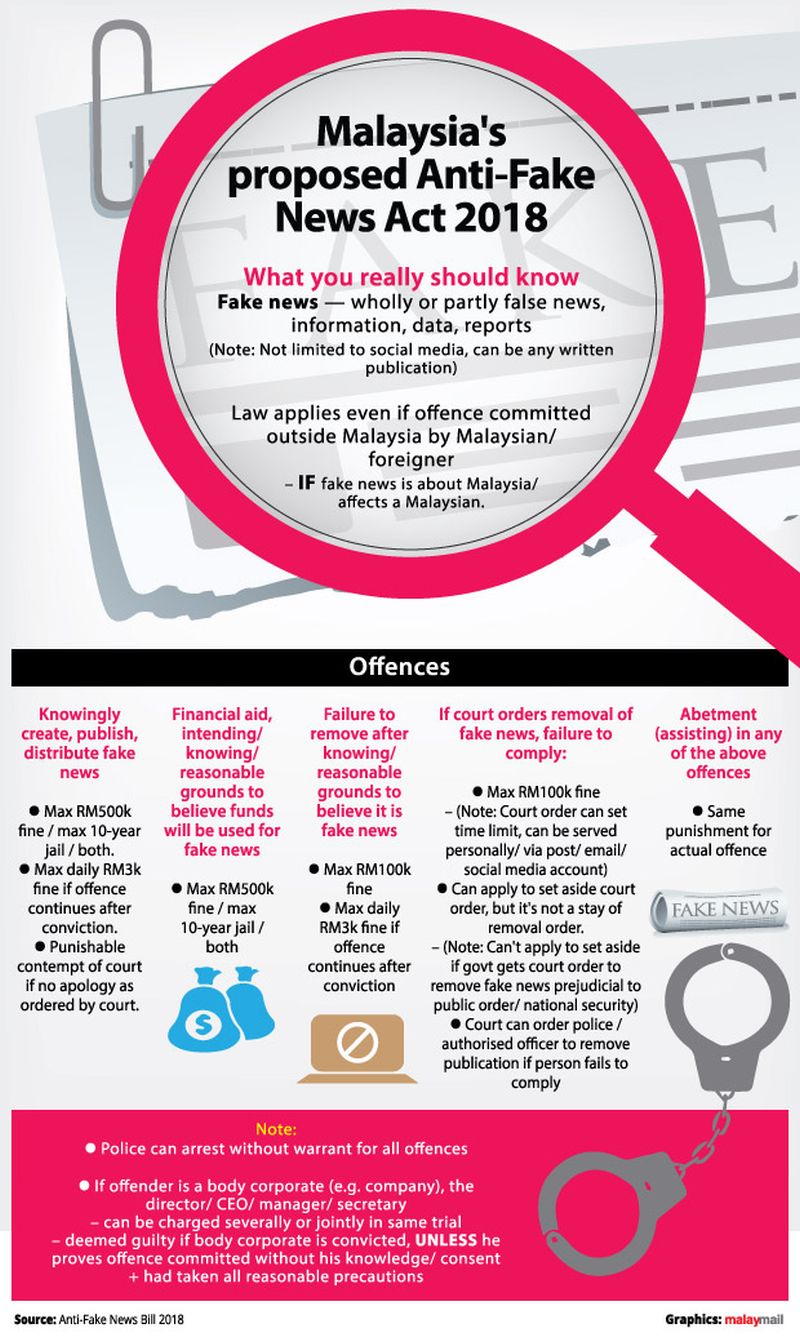 Lawyers for Liberty's executive director Eric Paulsen pointed out that the new offence of publishing of fake news covers the dissemination of the initial post, saying that “sharing a link on social media can now become a crime if the authorities determine it to be 'fake news'“.

With the proposed law's Section 6 also requiring a person to immediately remove a publication after knowing or having reasonable grounds to believe that it contains fake news or be deemed as committing a crime, he said administrators of popular social media platforms Whatsapp and Facebook groups may also be liable to penalties of a maximum RM100,000 fine and a daily RM3,000 for each day the offence is continued after conviction.

“The implication of this is clear: there is now a burden not only upon those creating or sharing content, but also for server hosts, forum moderators, and even WhatsApp chat and Facebook admins to delete content that could be false,” he said in a statement yesterday.

He said these two provisions will encourage self-censorship, especially by the independent online media, dissidents and the Opposition, adding that anyone who criticises the government will now have to live up to an “almost impossible burden of proof” of justifying what they post or share.

He highlighted other problems with the Bill, including its alleged “extremely vague” nature where it does not define matters such as the severity of the “fake news” that is required before it attracts criminal culpability or list out the defences that can be used by someone accused of publishing fake news.

The federal government yesterday issued a seven-point Frequently Asked Questions (FAQ) where it said the proposed law which has a broad scope would enable fake news to be dealt with in a comprehensive and effective manner, also giving the assurance that the Bill would respect the constitutional right to freedom of expression.

The proposed law that was tabled in Parliament yesterday also features eight examples of scenarios that would be considered as “fake news”. 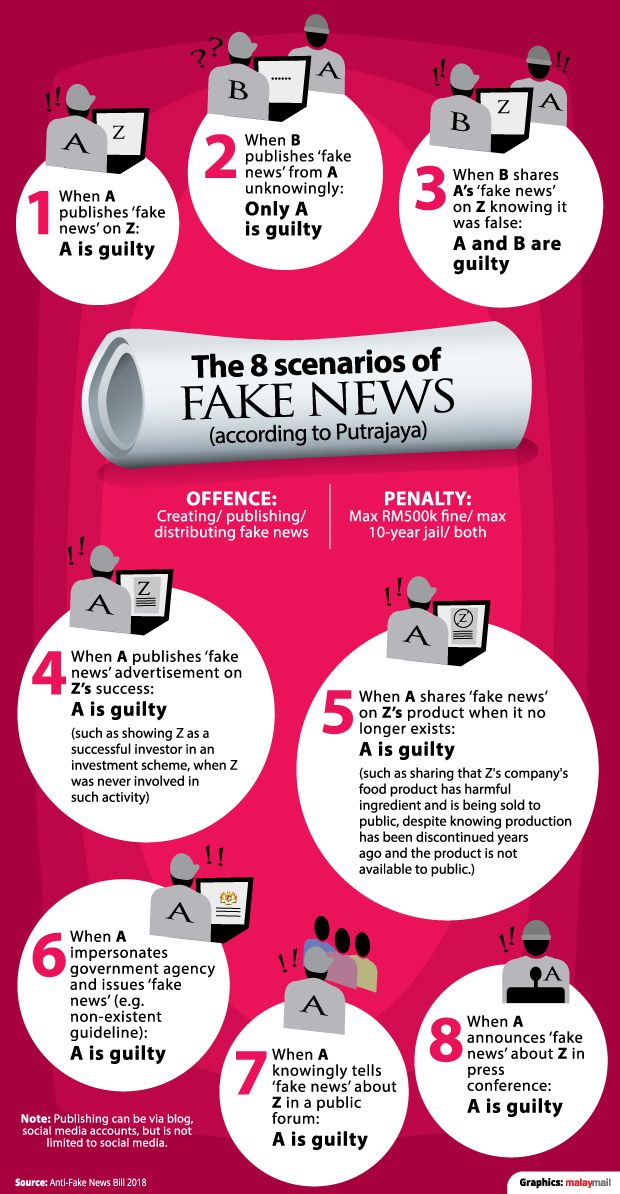