KUALA LUMPUR, March 26 — The Anti-Fake News Bill 2018 is unnecessary as there are already existing laws in place to deal with the spread of fake news, Opposition MPs said today.

Pakatan Harapan MPs labelled the Bill as a threat to freedom of speech, claiming that it could be used to silence any criticism aimed towards the ruling Barisan Nasional (BN).

“It is not about defamation or sedition because we have existing laws for those offences.

“We already have the Malaysian Communications and Multimedia Commission to anticipated attempts by irresponsible quarters to spread fake news, so why do we still need such law?,” PKR Batu MP Chua Tian Chang told Malay Mail when met outside the Parliament building.

He said the Bill imposed a form of psychological censorship and is draconian in nature, as it prevented people from sharing any information out of fear of harsh repercussions.

“Normally the judgement is left to the readers to decide and people use social media as an interaction platform for information verification process.

“Now there is no compulsion for people to tell the truth but there is a requirement for those who spread to know whether it is true, do you know how terrible it is?” he said.

“The line has become so grey that it stifles freedom of thinking among the populace,” he said.

PKR vice-president Nurul Izzah Anwar said the new Bill raises the question on who would be in control of managing the dissemination of accurate news.

The Lembah Pantai MP said the Bill had justified alleged suspicions that the proposed law was another way for the government to silence legitimate dissent and criticism.

“The penalty is extremely over the top... an overkill.

“The government itself has lost its credibility as an independent arbiter by virtue of the unanswered allegations with regards to the Cambridge Analytica scandal,” said Nurul Izzah, citing the recent expose of election meddling in Kedah by the data analytics firm.

Putrajaya has denied employing the services of the data analytics firm.

Padang Serai MP N. Surendran said the Bill was arbitrary, oppressive and unconstitutional as it defined fake news as anything wholly or partly false.

“This definition is so excessively wide that it will lead to a paralysis of participatory democracy in our country in what would be the biggest threat to democracy since our independence.

“Healthy and open public discourse will come to an end,” he said in a statement today.

Surendran said the public cannot free exercise the right to free speech with the constant threat of arrest and prosecution hanging over their heads.

“The punishment of RM500,000 or up to 10 years imprisonment meted out to convicted individuals for freedom of speech offence are disproportionate and excessive that could only be found in one-party states such as North Korea,” he said.

He said the definition goes beyond the “restrictions” allowed in Article 10(2)(a) of the Federal Constitution with regards to freedom of speech, as it will now include “fake news” even though it may not be a threat to public order.

“It would include any false news, even if it is not a threat to public order. This runs foul of Article 10(2)(a). Thus it can be said that the Anti-Fake News law is itself a fake law, and repugnant to the rule of law.

“I call upon the government to respect democracy and the rule of law, and to withdraw this Bill in its totality,” he said. 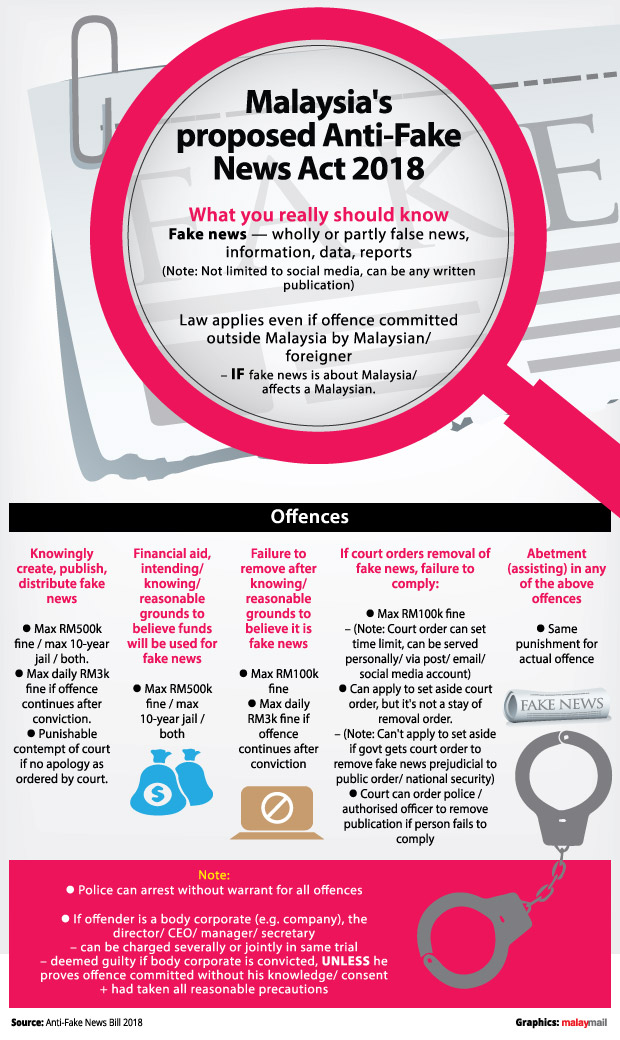