The Ladies’ Work Party hold yet another Sale of Work within church grounds to raise funds for the church, as seen during the 1923-1928 period. — Picture courtesy of St Andrew’s Presbyterian Church
Follow us on Instagram, subscribe to our Telegram channel and browser alerts for the latest news you need to know.
By By Ida Lim

KUALA LUMPUR, Sept 11 — St Andrew’s Presbyterian Church in Kuala Lumpur celebrates its 100th anniversary this year but there would have been no church had it not been for the Ladies’ Work Party.

Church records show how the women of St Andrew’s gamely took on the challenge of raising vital funds and keeping its finances healthy right from the start. 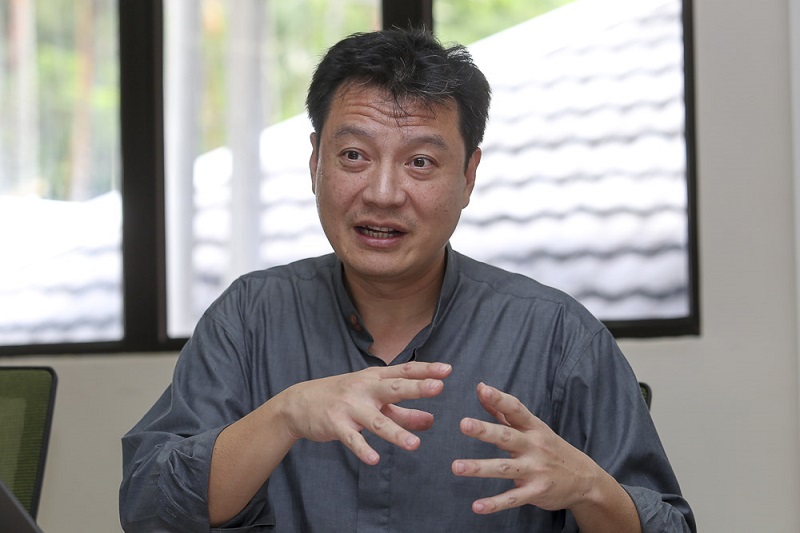 Kenneth Tan, who currently sits on St Andrew’s board of managers, said the church’s female members came together to form a fundraising committee that became known as the Ladies’ Work Party.

It was “women’s empowerment” in action, he said.

“Looking through the history it was always interesting to me, virtually everything about the church physical is the result of the women of the church,” he told Malay Mail Online in a recent interview, ticking off a long list of things which the women funded. 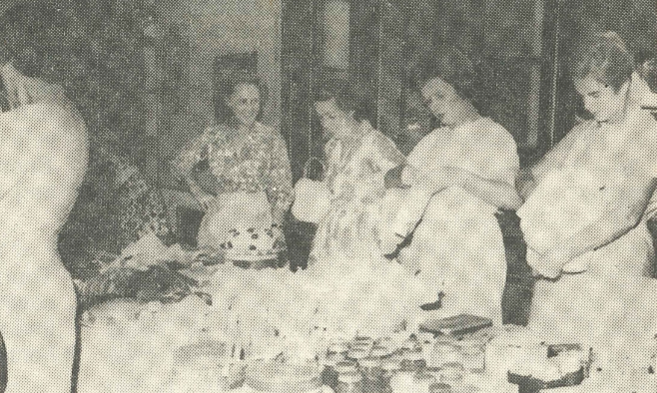 As seen in July 1963, a Sale of Work event organised by the Ladies’ Work Party. — Picture courtesy of St Andrew’s Presbyterian Church

“So you want to talk about what this church is built on, ya, you can say concrete and iron. I will also say it is built on knitwear, cookies and cakes; minus those knitwear, cookies and cakes, the church is not going to be here,” he said, explaining that they would usually hold a Sale of Work to literally sell what they have produced with profits to go towards the projects they were funding.

For the century-old church building that was built in 1917 at a cost of $25,000, the female church members were recorded — as early as 1914 — to have formed a “Ladies Working Association” with the aim of raising funds for it. This would later become known as the Ladies’ Work Party.

For the first official Sale of Work in May 6, 1916 that marked the start of the church building fund-raising, St Andrew’s first minister Reverend A. D. Harcus was recorded saying it turned out to be an “unqualified success”, surpassing expectations by contributing to a total $2,500 — which included cash donations — raised.

Even as St Andrew’s was in 1919 still facing a $6,000 deficit for its building fund, the church wanted to start raising funds for a manse or the minister’s house for which only $85 had been set aside at the time. 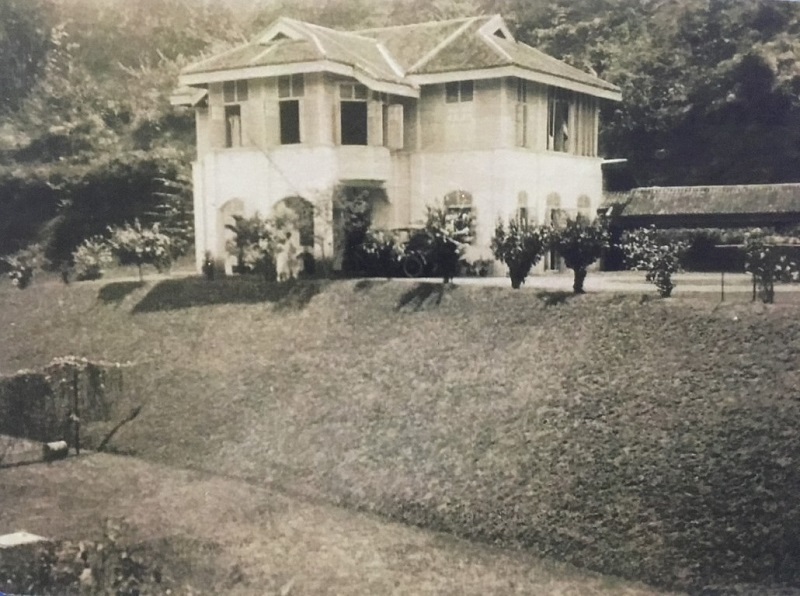 The manse as seen in 1923 with a tennis court then; the Ladies’ Work Party’s efforts paid off almost three quarters of the $22,710 bill for the manse and the manse’s land in eight years. — Picture courtesy of St Andrew’s Presbyterian Church

The Ladies’ Work Party worked quickly and set the ball rolling for the manse fund with a Sale of Work on March 1, 1919 that brought in the “magnificent sum” of $2,281, while members from Klang and a concert held the same month contributed $605 and $504 respectively.

With the last contribution in 1927 of $4,140 and $860 respectively from the Ladies’ Work Party and the home churches for the remaining sum for the manse, St Andrew’s finally became debt-free again. That was just six years after the first minister moved into the manse. 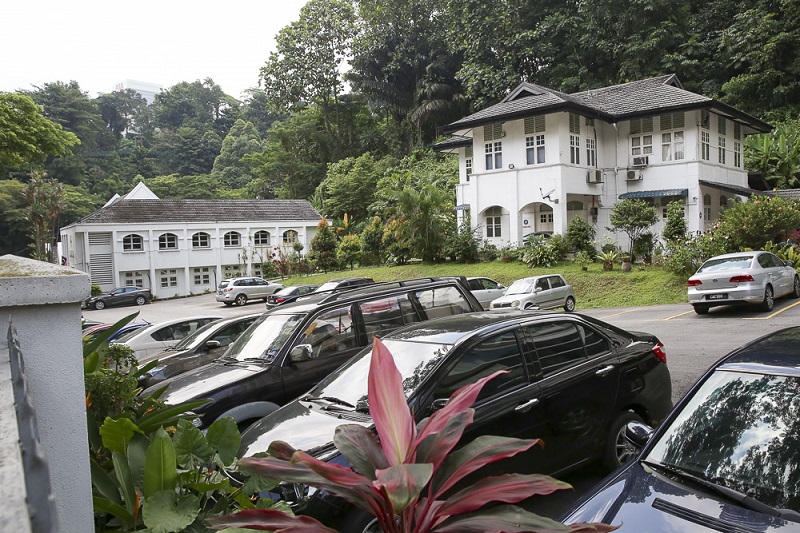 A view now of the unaltered manse and carpark where the tennis court was once located, and also the 1988 extension and addition to the original church building. — Picture by Choo Choy May

Reverend W. Buckingham even wrote in the local Presbyterian church newsletter The St Andrew’s Outlook in 1934: “In the building of the manse, the women of the congregation played a most conspicuous part. As in the case of the church, the history of its erection is largely the story of their untiring efforts.”

As a church that was particularly conscious about being debt-free, St Andrew’s would often rely on the Ladies’ Work Party including for a $5,000 hall extension, of which $1,400 was contributed by them in 1933 immediately after the financially-trying Great Depression period. 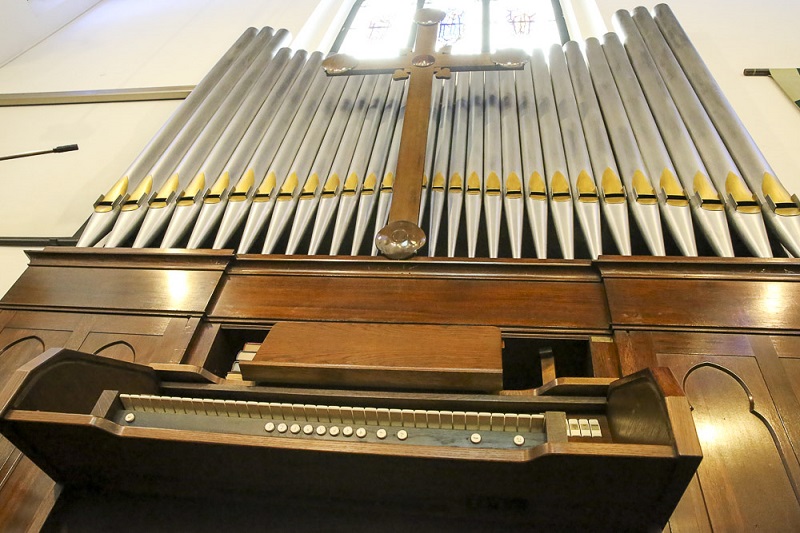 The pipe organ which was designed by James A Riddell also featured an organ case in solid teak to match the church hall’s teak pulpit panelling, which the Ladies’ Work Party had also spearheaded. — Picture by Choo Choy May

Stepping into the St Andrew’s main sanctuary, you will see a pipe organ and stained glass windows at the front, with the former credited to and the latter a gift from the Ladies’ Work Party.

It was finally built over six months by local labourers with local materials such as teak except for 29 UK-cast and milled pipes, before its dedication in April 1939.

“So after 12 years, a dream has come true, and through the efforts mainly of the Ladies’ Work Party we now possess a beautiful instrument which is a worthy addition to the House of God,” The St Andrew’s Outlook’s August 1939 edition said. 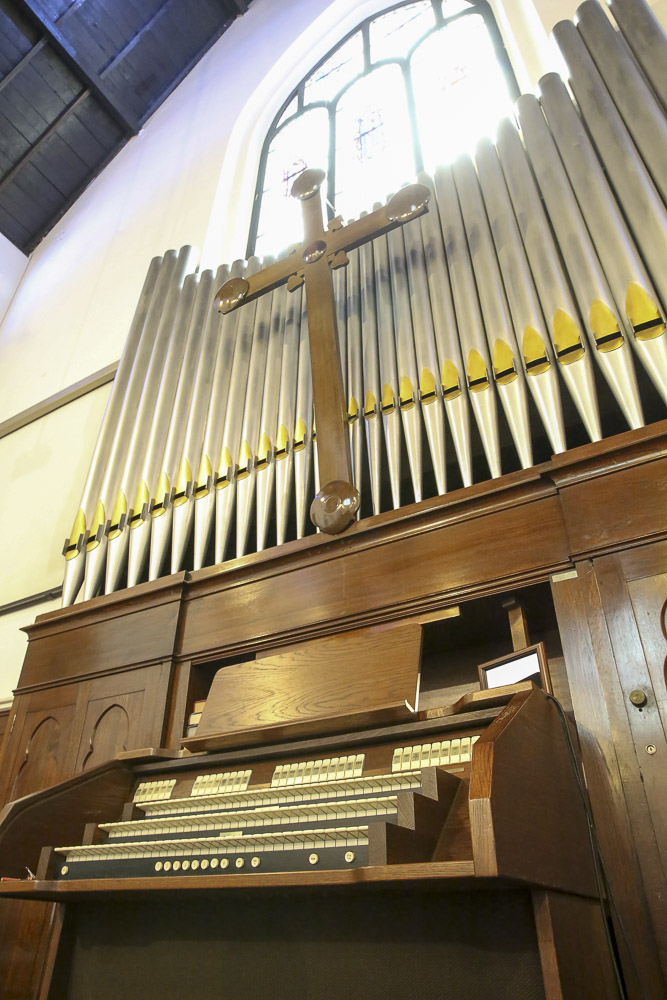 The pipe organ’s cross was handcrafted by Malaysian Chinese carpenters using the local hardwood nyatoh and was added in 1992. — Picture by Choo Choy May

This pipe organ remains in use till today and can be heard on most Sundays during St Andrew’s hour-long Traditional Family Worship Services, except for when organists are unavailable or when it undergoes maintenance.

Three organists in their 40s and 50s are currently the only ones who play the musical instrument.

After a three-year pause in St Andrew’s services as their minister Reverend Alfred Webb was imprisoned from 1942-1945, the Ladies’ Work Party kicked back into action with fund-raising projects to refurnish the church which had been looted during the Japanese occupation of Malaya. 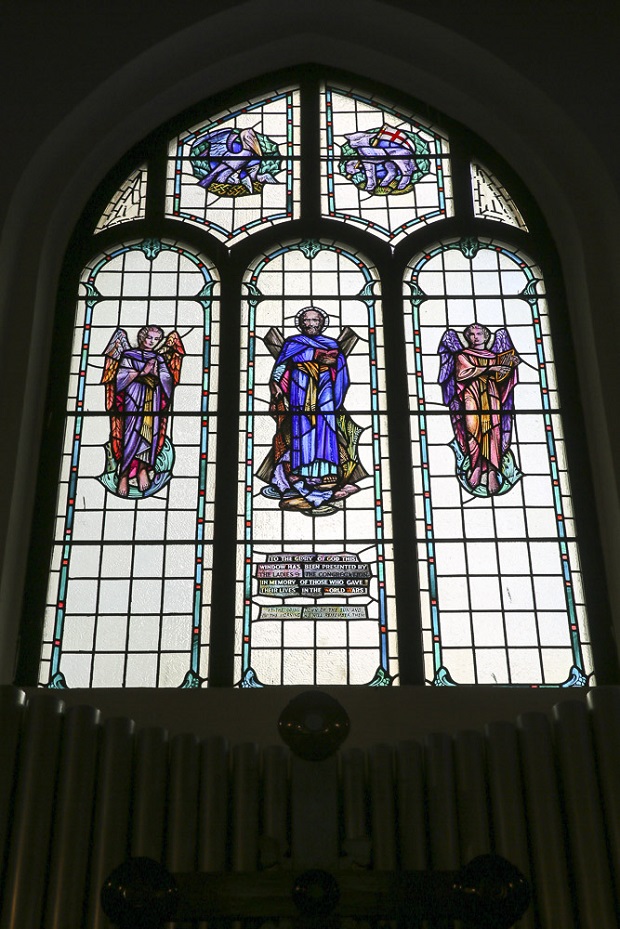 The stained-glass window gifted and presented by the Ladies’ Work Party on November 13, 1955. — Picture by Choo Choy May

The two windows were unveiled by then British High Commissioner Sir Donald MacGillivray in November 1955, an event which was broadcasted by Radio Malaya.

The women of St Andrew’s are tireless, rising to the occasion repeatedly. They also gifted the church silk and satin banners in the 1980s which to this day still adorn the sanctuary’s walls, and attended to small details such as preparing the weekly fresh flower arrangements and decorations for weddings and baptisms.

As evidence of how the Ladies’ Work Party’s story is so tightly woven into at least two-fifths of St Andrew’s 100-year history, just look at the many acknowledgements over the years in The St Andrew’s Outlook. 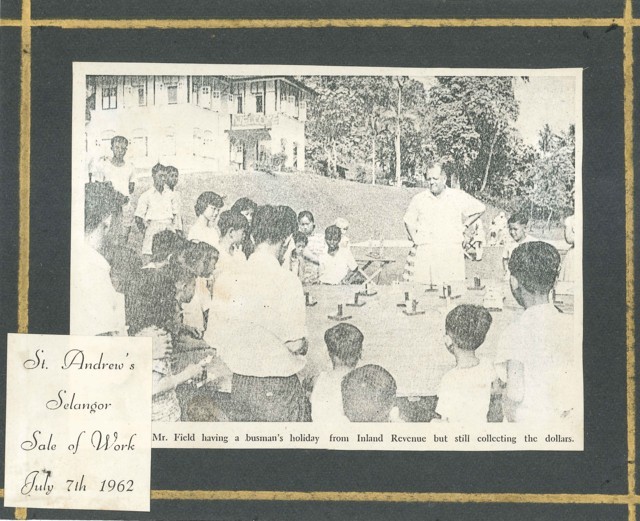 The Sale of Work events have sometimes been described as a ‘fair’ and have included games booths, as appears to be shown in this July 7, 1962 photo. — Picture courtesy of St Andrew’s Presbyterian Church

Those were the days when the men of St Andrew’s were mostly busy with their occupations as planters, civil servants and traders; the trend of working women and dual-income households common nowadays changed their role in society.

“It’s different, actually the women make a great contribution to the church, but it’s not the financial piece that it was, not that women don’t contribute financially but they don’t have the leadership role like they did earlier, but in terms of the ministries, they have a major part in the functioning of our church’s ministries,” he said. 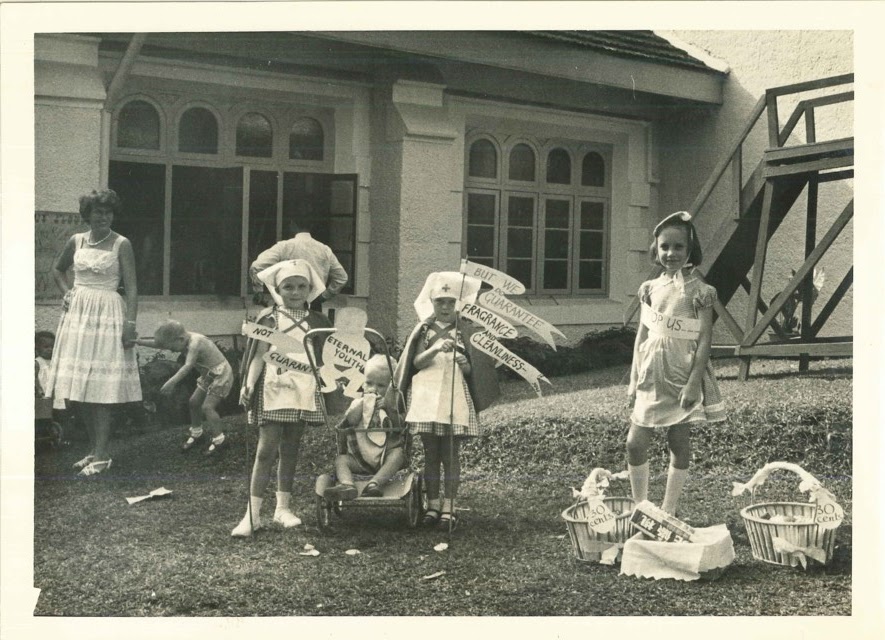 Children from St Andrew’s Sunday School help out too by selling soap at the church’s Sale of Work on July 7, 1962. — Picture courtesy of St Andrew’s Presbyterian Church

One of the women of St Andrew’s also left a mark on the local education scene.

Irene Lim, the church’s deacon in charge of the Christian education committee, highlighted the role of St Andrew’s member Alice Fairfield-Smith in starting what would later become one of the earliest and leading international schools in Kuala Lumpur.

Fairfield-Smith, a Harvard biology graduate who trained as a teacher, had after World War II started off in 1946 teaching her own daughter.

Keen demand among the expatriate community saw her non-profit kindergarten operating out of her own house growing from two children to six within a month, and two classes within three months.

The school was in those days known as the Eaton Road School as it operated out of her house which was on Eaton Road; subsequently they rented the Masonic Hall at Damansara Road, and later also rented St Andrew’s church hall from 1951 to 1963 for the use of Alice Smith Kindergarten. 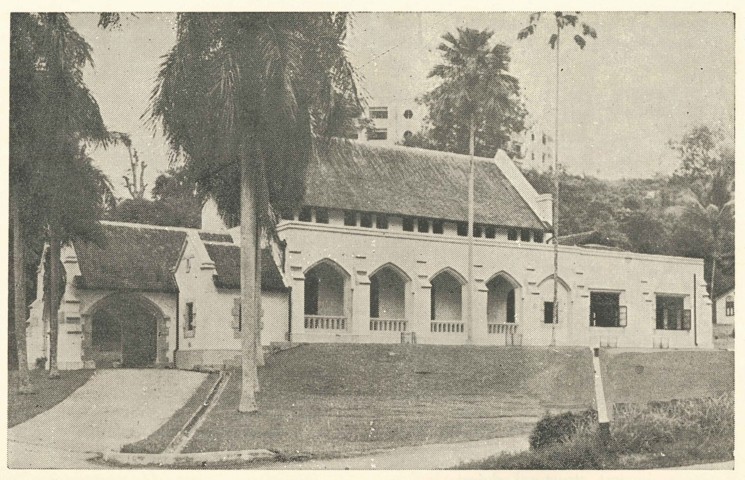 St Andrew’s church hall as seen in 1955, which is during the period when Alice Smith Kindergarten students met there. — Picture courtesy of St Andrew’s Presbyterian Church

In a show of foresight and planning that has ensured that the school remains standing after 77 years, she had in 1949 — prior to leaving Malaya — approached St Andrew’s then minister Reverend Sydney Evans to ask that the church take over the running of the school.

The minister served on the school’s first board of trustee governors, with the rest representatives of the St Mary’s Cathedral and societies representing the British, Irish and Scottish community here.

Today St Andrew’s continues to have a permanent seat on the school’s board of trustees, even as other organisations and students’ parents were added over the years as governors.

“And I believe that is the reason why the school is still there today, because we are organisations, the Trustee Organisation structure facilitated the perpetuation and continuity of the school. Because parents are only members until they leave, whereas we are in perpetuity so whoever is the representative of the organisation will be the governor, the trustee,” she said. 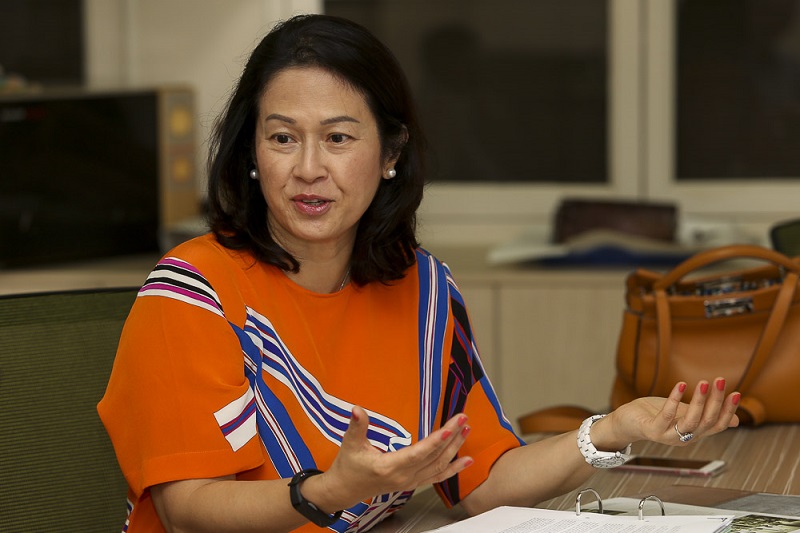 Irene Lim said St Andrew’s had felt it was not in a position to take on responsibility of the school, but Rev Evans became one of the seven original suscribers to the 1950 legal document for the school’s incorporation. — Picture by Choo Choy May

“When she left Malaya in 1950 after running the school for four years, there were only 70 pupils and seven teachers. When she returned to visit in 1960 she was astonished to learn that enrolment had topped 250!” Lim said, citing a Malay Mail news report dated August 12, 1960 on Fairfield-Smith and the Alice Smith School.

The school which today has 1,533 students from 46 countries continues to be operated on a not-for-profit basis, with those from the UK or Commonwealth countries and Malaysia forming the bulk of their student population, its website states.

More details on St Andrew’s history and journey so far can be seen at its Centenary Exhibition that is open to the public from 8am onwards on Sundays. The exhibition will end in April 2018.