Next time you are in Sabah, try its traditional cuisine 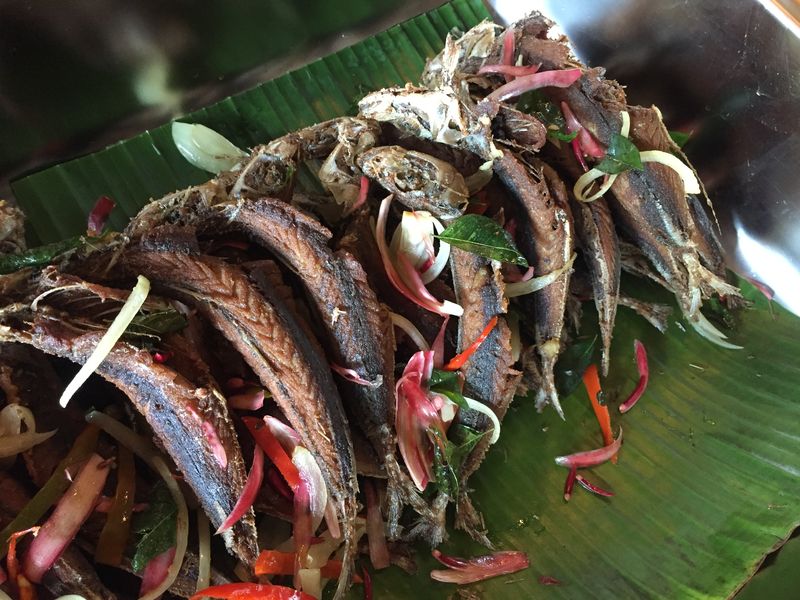 Fried or braised, the basung fish is a tasty dish that can be eaten whole if deep-fried properly. — Picture by Julia Chan 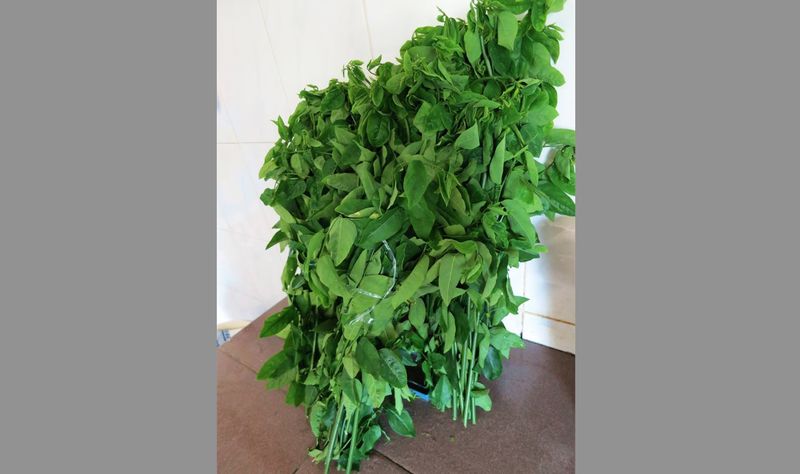 The young stems of the ‘Sabah veggie’ are crunchy, sweet and delicious. — Picture courtesy of Murphy Ng 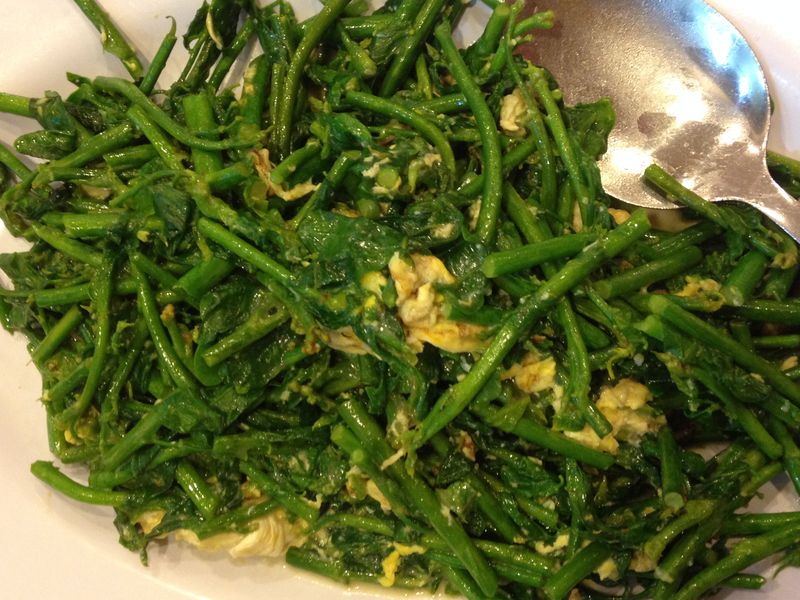 Sayur Manis or ‘Sabah veggie’ fried with eggs is a dish commonly available at many restaurants in Kota Kinabalu. — Picture by Julia Chan 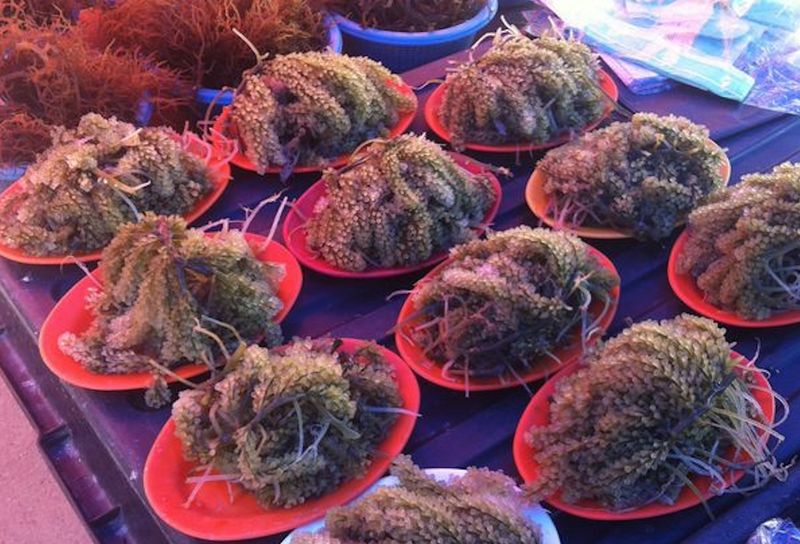 Latok is available at markets in Kota Kinabalu where grilled seafood is sold. — Picture by Julia Chan 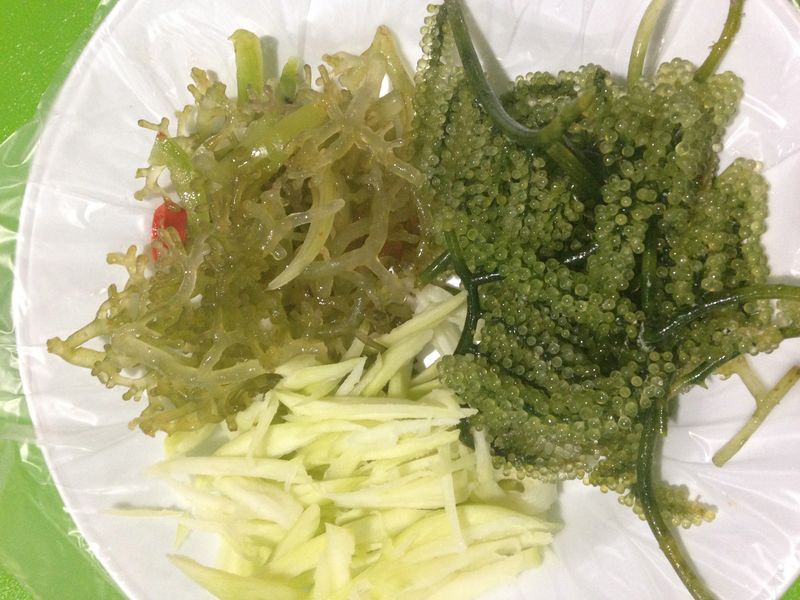 Latok is a kind of seaweed eaten by the seafaring Bajau. — Picture by Julia Chan 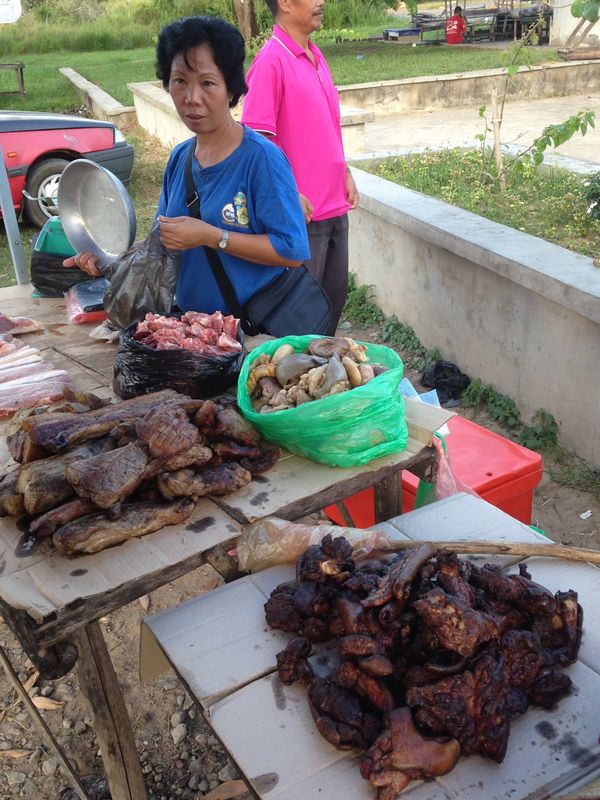 Smoked wild boar meat can be bought from roadside stalls on the highway from Kota Kinabalu to Kundasang, and in Kota Marudu. — Picture by Julia Chan Smoked wild boar meat is a delicacy popular with the young and old. — Picture by Julia Chan 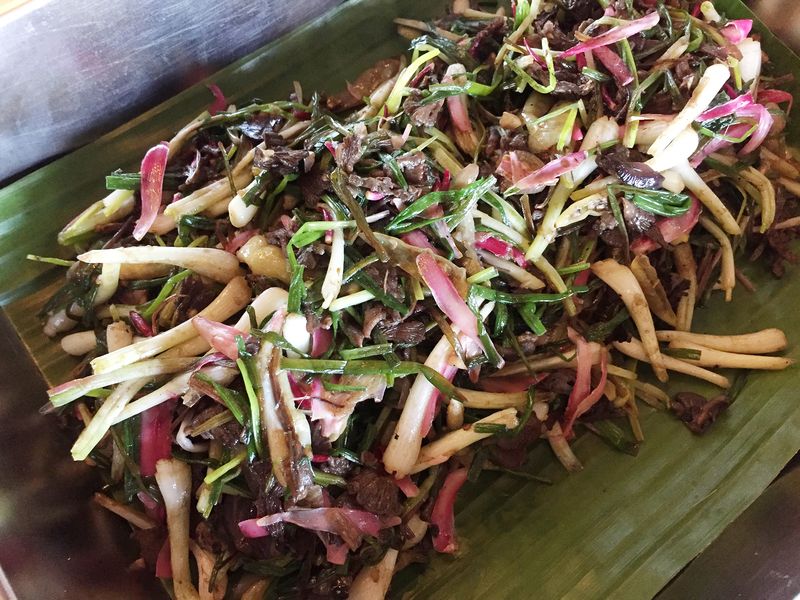 Losun is a wild spring onion that has a less pungent taste than normal spring onions. . — Picture by Julia Chan 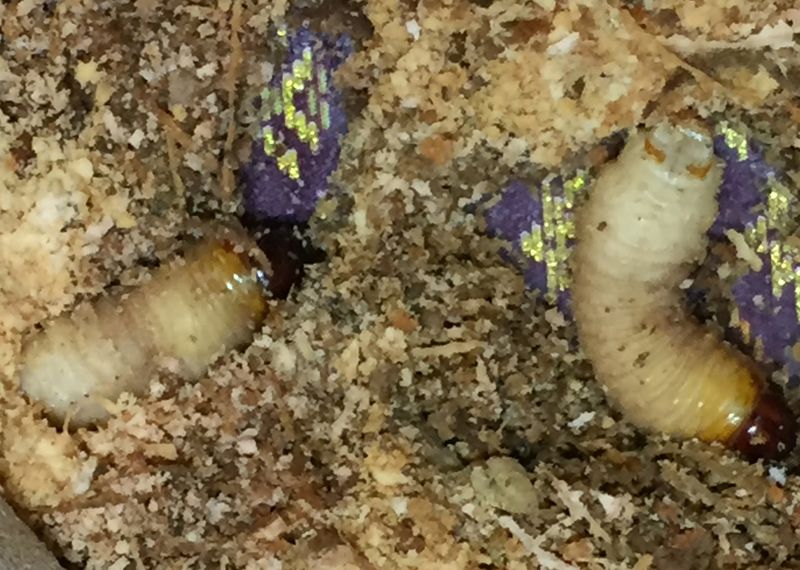 The ‘live’ sago worms may a tough act to swallow. — Picture by Julia Chan 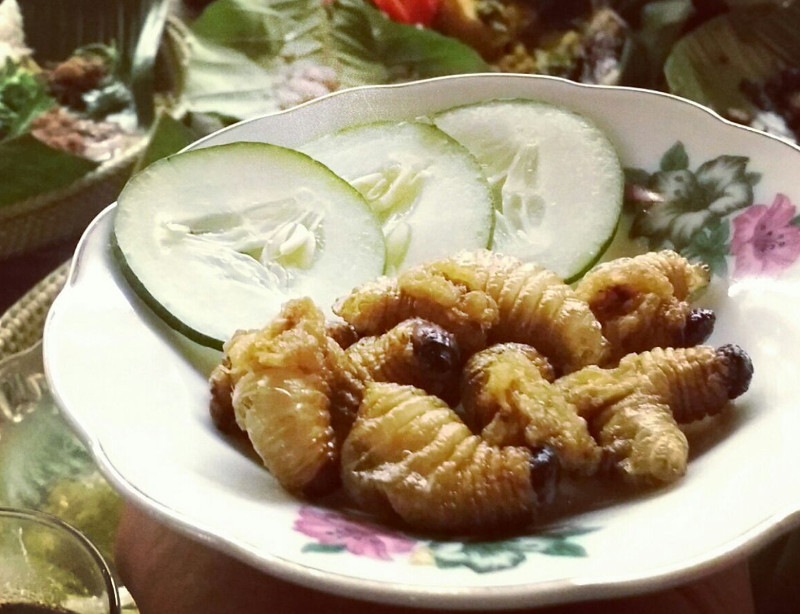 Among the most exotic of Sabah's native foods, the butod, or sago worm is highly nutritious if a little squirm-worthy. — Picture by Julia Chan 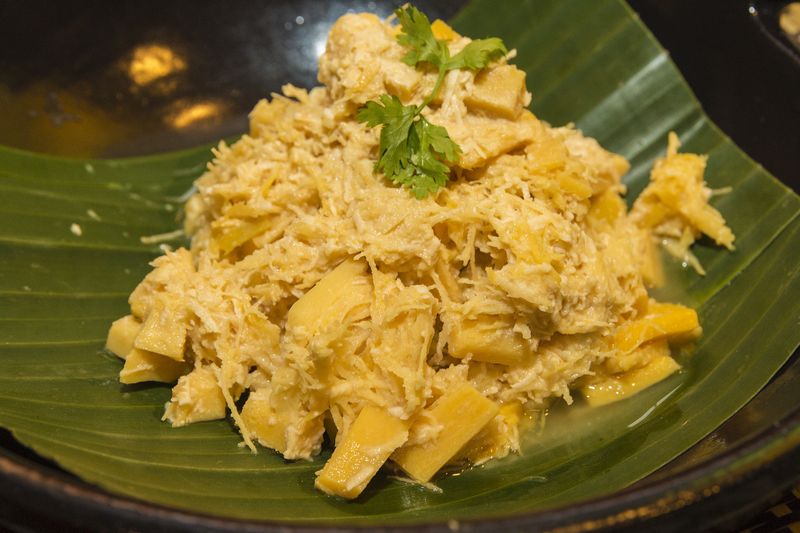 ‘Bambangan’ — a kind of wild mango — has the deliciously fruity and sweet smell of tropical fruits but is tangy to the taste. — Picture courtesy of Murphy Ng Bosou is eaten as a condiment to rice. — Picture by Julia Chan 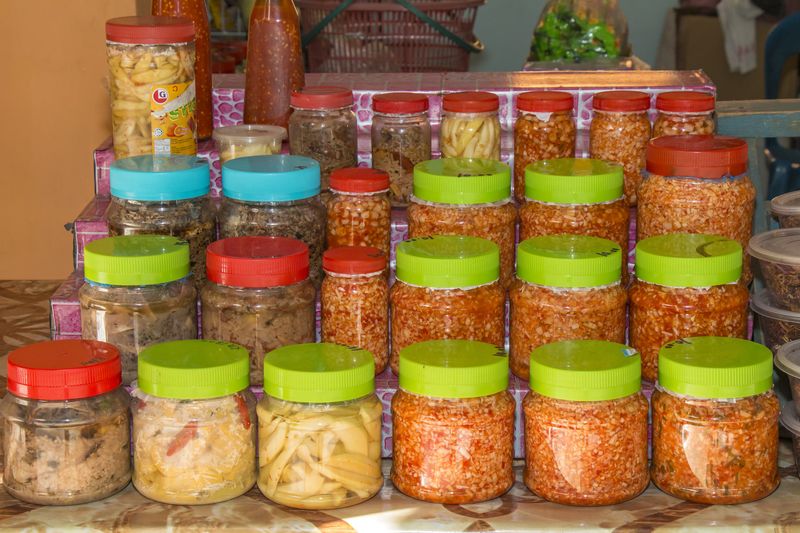 ‘Tuhau’ in pickle form are sold at Sabah’s roadside stalls and ‘tamus.’ — Picture by Murphy Ng 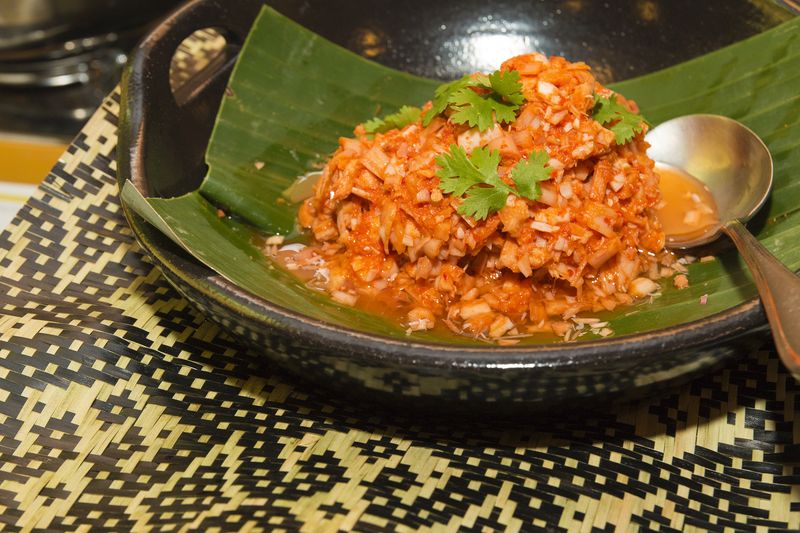 Tuhau is made from wild ginger that grows in the jungles of Sabah. — Picture by Murphy Ng ‘Pinasakan’ is a quintessential Sabahan dish of braised ‘basung’ fish in ‘takob akob’ and turmeric broth. This is also eaten with ‘ambuyat.’ — Picture by Julia Chan

KOTA KINABALU, Jan 15 — While most visitors to Sabah become quickly acquainted with Tuaran mee, ngiu chap, and fresh seafood cooked in different styles, traditional Kadazandusun food remains something of a mystery to them (and I dare say, quite a few residents).

The food of the natives is not easily available and unless you make a special effort to find them (timing sometimes plays a big role too), you are not likely to savour this anytime soon.

After all, the ingredients needed to make these dishes are not widely available in supermarkets and often have to be “hunted down” at local tamus, and local farmers’ markets.

But like anything worthwhile, spend a little time and effort and your palate is in for a treat that could change your perception of Sabah beyond the familiar Tuaran mee.

This can best be described as a fish salad like ceviche or yee sang. Thin slices of fish, most often tenggiri or mackerel, are tossed in a variation or mixture of the following: chilli, ginger, shallots, bitter gourd, and most importantly, lime dressing.

The acidity in the lime “cooks the fish” and turns the flesh a beautiful milky white colour.

Other seafood like prawns and squid can be used but is 99 per cent always fish. It generally has a very short shelf life and has to be eaten within a few hours or a day or two if refrigerated.

Some eat it as an appetiser, but it is also commonly served as a main dish with rice.

While it used to be eaten during festive occasions only, hinava can be found in some local restaurants specialising in Sabah dishes and sometimes even hotel restaurants.

Known also as pinasakan sada, or pinarasakan, this Kadazandusun dish features the basung fish, or a big-eye scad; the fish is braised with a tangy wild fruit known as takob akob which is similar to asam keping or failing that, tamarind pieces, fresh turmeric, salt and sometimes, bambangan.

It’s braised until much of the liquid has evaporated. The fish takes on a slightly sour taste but a good pinasakan should have a balance of saltiness as well.

A dish born out of necessity, pinasakan was a way to preserve food so it can last several days. It is eaten with rice normally, although some eat it with ambuyat.

This is a gooey starch replacement for rice originating from the west coast of Sabah and popular with the Bisaya tribes, Dusun-tatana and Brunei-Malay tribes.

Ambuyat is made from sago powder from the rumbia plant. It is mixed with water until it becomes a gummy-looking blob of indistinct white to translucent colour. A pair of chopstick-like utensil with prongs, called candas, are used to twirl around the ambuyat before consumption.

Its blandness is why it is often eaten with other flavourful dishes like pinasakan, bambangan and tuhau, or anything with a good gravy.

It’s fairly common in some areas in the West coast of Sabah but those in the city will find it hard to find outside of festive occasions.

A type of wild ginger that grows in the jungles of Sabah, first timers might find the smell a little bit too pungent, but proper cooking will bring out an additional fragrance that is very distinctive to Kadazandusun culture.

Tuhau is most commonly eaten pickled, as a condiment to the main meal or sometimes made into sambal, as an added ingredient into dishes and most recently, dried and deep-fried.

Sabahans like to fry it with salted fish as well. For the pickled version, tiny diced tuhau is mixed with chilli padi, salt and lime or vinegar.

Tuhau can be found at tamus around Sabah, or roadside stalls near Ranau or Tambunan or Keningau. They are sold in raw form, or pickled and sold in jars.

This dish packs quite an exotic punch. Basically it is fermented freshwater fish usually small in size, like ikan pelian.

It is tossed with rice, pangi, a local herb which can be found in tamus, a lot of salt and bungor, a type of local herb found in swampy areas before being stored in an airtight glass container for about two weeks.

The smell can be overwhelming at first, but its fishy saltiness is a delicacy that cannot be missed.

It is eaten as a condiment to rice, or sometimes mixed into stir-fries with chilli and garlic. Not commonly found for sale, it is usually made by Kadazandusun families.

Bambangan is a type of wild mango endemic to Sabah, and only fruits in season. Sweet and fruity to the nose but tangy in taste, it is often eaten as a preserved condiment.

Unlike most mangoes found locally, the bambangan has brown skin that is thicker and tougher than most mangoes. Its flesh, when ripe, is a tantalising bright yellow.

Bambangan is sour even when ripe so although it is edible raw, most people turn it into a pickle with chilli, and grated bambangan seed is eaten as a condiment with rice. It is also added to some dishes, including desserts, which benefit greatly from its lovely aroma.

It can be found at tamus and roadside stalls on the road between Ranau and Kota Kinabalu during the harvest month, around July to August.

A staple of Kadazandusun cuisine, linopot refers to rice that is steamed in a leaf, usually the Doringin or leaf from the tarap tree, which are big enough to wrap around the rice.

Traditionally, the hill rice is mixed with boiled yams or sweet potato so it takes on a purplish or brown hue from the root vegetables. Nowadays, people usually use white rice. The mixture is then compacted well into a roundish shape.

Even when cold, the rice is deliciously fragrant and good enough to eat on its own.

Linopot came about because of necessity; farmers and villagers who travelled far from home could then carry their lunch with them. Nowadays, linopot can only be found at specialty restaurants, and during festive occasions in Dusun areas like Ranau.

The “Fear Factor” food of Sabah, butod is likely the most “exotic” of all.

Butod refers to sago worms that are found feeding on the insides of the sago palm tree, a few months before they turn into beetles.

Fat and squishy, and about the length of your little finger, they look like giant maggots but don’t let its novelty fool you. It is said that these wriggly creatures that feed on the decaying pith of the sago tree is a solid protein source and is very nutritious.

To eat it, you can pluck it straight from the tree, grab its hard head (to avoid eating it) and bite it off. Its insides will come bursting out, and has been described as “creamy” but not pungent or particularly foul. Some find the skin a bit chewy.

If eating “live” worms is a tough act to swallow, they can also be cooked in a stir-fry, but this significantly robs it of its nutrition value.

Fried butod is sometimes eaten as pusas — snacks to be had while drinking beer or any alcohol.

These worms may be found in tamus across the state, or at the annual Sago Festival or Pesta Rumbia in Kuala Penyu.

The wild spring onions of Borneo, also known as bavang koubasanan, losun has less of a pungent taste than normal spring onions and is widely available in the interior jungles of Borneo.

What makes this dish so special is how it is fried with bunga kantan or torch ginger buds, garlic chives, white chillies, garlic and white pepper, and sometimes anchovies.

Not obtrusive on the palate, and a staple for those who have had it throughout their childhood, it’s an under-rated quintessential Sabahan dish

It is often had with linopot of wild rice, and hinava for a combination of all the best flavours.

Can be found ready to eat at Kadazan coffee shops, and at tamus across the State.

Sinalau means smoked and bakas is wild boar in Kadazan. This delicacy is a favourite among locals and thoroughly appreciated by all ages.

Smoking was a means to preserve meat in the old days where they hunted wild boar for survival.

This delicacy can be found at roadside stalls from Kota Kinabalu to Kundasang, and in Kota Marudu and are identifiable by the big plumes of smoke. Occasionally there are big signs too announcing its name and non-halal status.

The cooking is simple, smoked over low heat for hours, sometimes marinated with salt and soy sauce, sometimes plain. It is also fairly cheap at about RM10 per serving in a styrofoam box or RM25 per kg. Have it with beer and linopot for a truly Sabahan meal.

And special mention must also be made to the following:

A type of seaweed which looks like tiny green grapes, latok is usually eaten by the seafaring Bajau.

These delicacies are literally bursting with flavours of the sea, and are often paired as a side dish — mixed with chili and lime — for seafood like grilled fish and a sour salad of some sort.

Available at seaside markets in Kota Kinabalu where grilled seafood is sold.

Known simply as “Sabah veggie” in most places, the young stems of the sayur manis are crunchy and sweet and especially delicious.

Although not strictly endemic, most say this vegetable cannot be found at restaurants anywhere else.

Available at many restaurants in Kota Kinabalu, they are often cooked with chilli or belacan, or with beaten eggs for a non-spicy alternative.

Basung is just big-eyed scads, the same fish often used in pinasakan, but deep fried till its crunchy and when cooked perfectly, can be eaten whole.

The fish is simply marinated and then fried. The fish head, in particular, is especially tasty and goes well with beer.

Look for this in local drinking spots.