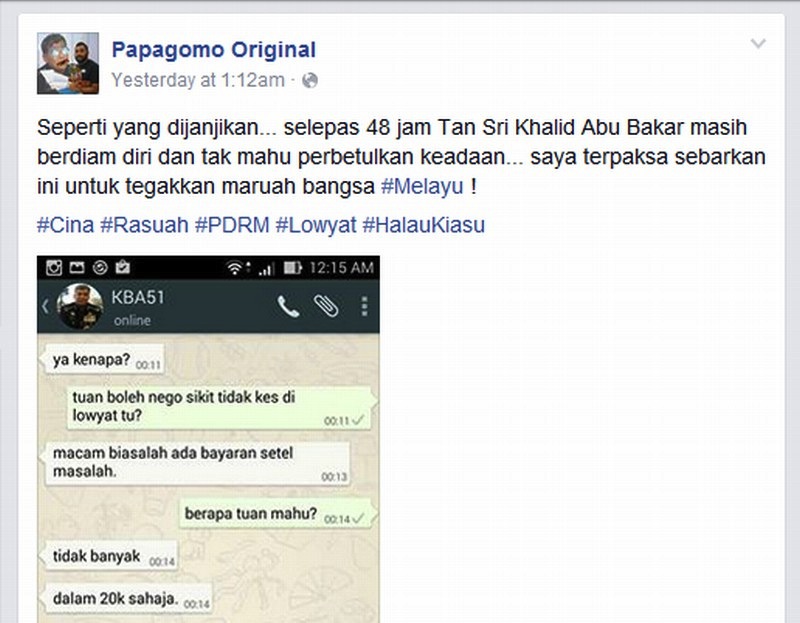 an investigation has been launched into the claim that he solicited a bribe from controversial blogger Wan Muhammad Azri Wan Deris or Papagomo to “settle” the latter’s case related to last Sunday’s riots outside Low Yat Plaza.

Khalid said the police are aware of the allegation made on a Facebook page linked to Muhammad Azri.

“A [report] has been lodged and we will investigate,” he told Malay Mail Online via text message.

Yesterday, a screen capture of a purported WhatsApp conversation was posted on the Facebook page, Papagomo Original, alluding to an attempt to solicit a bribe to “settle” a sedition probe on Muhammad Azri for allegedly stirring racial sentiments in connection to the Low Yat incident.

The screen capture purportedly showed a chat believed to be between Muhammad Azri and one KBAB51 - which is Khalid’s Twitter handle - in which the latter had asked for “around 20k only” to settle the “problem”.

To date, a total of 24 people, including Papagomo, have been arrested over the riot that saw five people injured including three journalists from Chinese media organisations.

The riot started after a 22-year-old Malay man was handed over on Saturday to the police for allegedly stealing an RM800 phone from a store at the popular tech mall.

Rumours swirled on social media after the alleged theft that the Chinese trader had sold the Malay man a counterfeit phone, leading to calls to boycott the “cheating” Chinese traders and the complex itself.