As doors to international schools open, race to snag Malaysian students is on 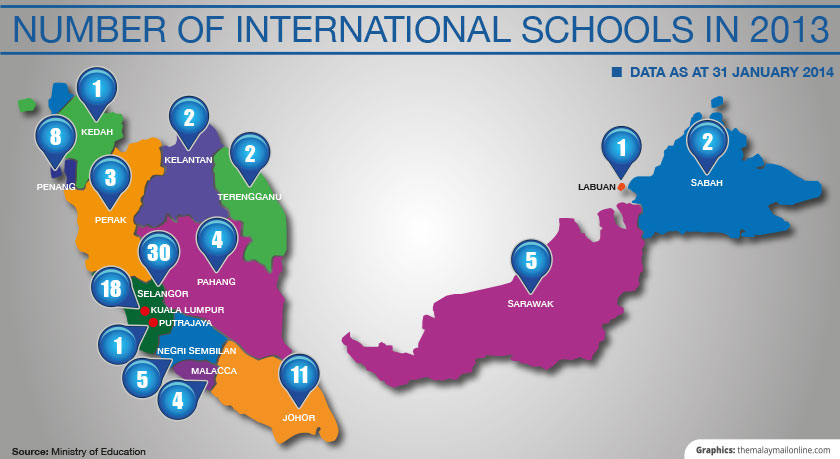 The hefty tab goes to one new international school, as competition heats up to entice parents into paying top ringgit for their children’s education.

No longer an exclusive option for the rich and the elite, education groups, banks, developers and major corporations are now cashing in on the lucrative business.

This follows the removal in 2010 of the 40 per cent quota on local students, in line with the government’s ambitious effort to promote Malaysia as an education hub.

Four years ago, there were just 21 international schools in the country; today, there are 99 schools and the Education Ministry has already issued 23 more licences.

The schools, however, don’t come cheap.

He added that parents who opt to send their children to international schools are “very demanding”. The checklist for the schools would include facilities such as swimming pools, football fields, computer labs, and music rooms, among others.

Both said it would take about five years, assuming the school is doing everything right, with a good track record, good teachers, complete facilities among a long list of criteria, to break even.

The sky-high investment cost is bound to trickle down to the parents, with a fee of about RM36,000 per annum, for a “mid-range school”, Elajsolan said.

A check by The Malay Mail Online showed that one of the highest fee for the final year in high school, Year 13, costs RM98,839 at the Mont’ Kiara International School (MKIS) for the 2013/2014 academic year.

With the sudden increase in international schools, parents now have a wider range to choose from in terms of fee range, Gan said.

“Last time, all the international schools are of the same price, and that’s the GIS price,” he said, referring to Garden International School, which was established since 1951.

GIS is among the top tier international schools, which charge RM75,600 per annum for the 2013/2014 academic year for Year 13 students.

Some schools defined by industry players as international curriculum-based schools tend to have a lower fees compared to international schools that not only import the curriculum, but also the teachers, and the whole set-up.

Education Minister II Datuk Seri Idris Jusoh said that since 2006, the number of international schools in Malaysia has nearly doubled.

This has surpassed the government’s target of 87 international schools in Malaysia by 2020, he added.

The total student enrolment, however is only at 39,460, according to the latest number provided by the minister last month, which is still below the target of 75,000 students by 2020.

When asked if there was a concern of oversupply of schools, Idris said the ministry will be more stringent in approving new licences for such schools and ensure those already approved adhere to the standard set by the ministry.

“We wouldn’t just approve any new applications just like that. We will look into the quality of teaching, of growth, quality that they offer to make sure that the private education really offer quality education,” he said at the TIS launch last month.

One of the first fully accredited international school here is the International School of Kuala Lumpur (ISKL), which was established in 1965.

ISKL director of marketing Hilda Alposilva said the government’s effort to propel the country into Asia’s top performing economies, which includes developing an education hub in KL and in Johor’s Iskandar region, is expected to continue to drive growth for such schools.

Gan said the Taylor’s Group is always looking for land to set up more schools. Ideally, he said, one a year — if it finds the right price for 10 to 12 acres of land.

He said the plan was for TIS to be “your neighbourhood international school”.

Elajsolan, who is also the Dean of Engineering at Mahsa University, said it has already gotten the approval for an international school and a private school in Bandar Saujana Putra.

Paying for prestige and accreditation

Some of the more established schools, such as MKIS and the GIS are accredited by the International Baccalaureate Organisation, and the Western Association of Schools and Colleges, which is linked to some 170 colleges and universities, mostly in the US.

MKIS uses a North American curriculum while GIS, which has one of the highest enrolment of more than 2,000 students, uses a British International Curriculum.

Elajsolan said some parents felt that the teaching quality in public schools has deteriorated and chose to send their children to international schools for more well-rounded schooling.

“They've got the music room, so they want their children to have a modern understanding of how they learn, not like the rote learning you find in [public] schools,” he said.

A father, who only wants to be identified as J.H. said his daughter is exposed to opportunities in performing in theatre and dance at the international school she’s currently enrolled in.

“My daughter has plans on what she wants to do and she gets part scholarship because of her involvements.

“That's why in international schools, you find kids who are young but very mature,” he said.