Till debt do us part

KUALA LUMPUR, Dec 24 ― Dr Farah’s wedding celebration last year comprised three receptions costing a whopping RM95,000 that forced her to take a RM15,000 loan even after getting financial help from her family.

The 30-year-old doctor, who asked to speak using a pseudonym, said that her father had sponsored RM15,000 for the reception at his home state in Kelantan, while her husband’s family spent RM15,000 for their wedding dinner in Putrajaya.

“That was my mum’s thinking. My mum’s function was very grand. There were dancers, ‘silat’ (Malay martial arts) performers, an MC who was hired,” she said, adding that the third reception, which was for her mother’s side of the family in Selayang, cost RM30,000. There were separate receptions for her parents as they are divorced.

Dr Farah said that she and her 29-year-old husband spent another RM35,000 on items like dowry, a jazz band at one of the receptions, silat performers, accommodation for her in-laws who are from Johor, invitation cards, decorations, clothes, wedding rings and make-up.

Despite the exorbitant cost of the wedding, however, Dr Farah said that she and her husband managed to buy a condominium unit in Putrajaya.

Seasoned wedding planners say that the cost of an average wedding, across all races, has soared to above RM50,000, causing some couples to take out personal loans to pay for their nuptials if they are unable to get much financial support from their parents.

“To beat the ‘competition’, to ensure that their wedding is unique, special and better than a friend’s wedding before theirs,” Leticia Hsu, president and co-founder of the Association of Wedding Professionals (AWP), told The Malay Mail Online in a recent email interview, when asked why some couples spend more than they can afford.

“Back in 2008, wedding vendors were about 10 per cent lower in cost than they are now and even food costs were lower. Generally, a five-star hotel charged RM1,200++ per table. Now, that same hotel charges RM2,200++ per table,” added the director of honour of Elysium Weddings Sdn Bhd.

Prices quoted “++” denote that an additional service charge ranging from 10 to 15 per cent and government tax of 6 per cent that is yet to be tacked on.

Hsu, who has been in the business for almost 13 years, said that couples who get into debt to tie the knot usually borrow between RM30,000 and RM50,000. 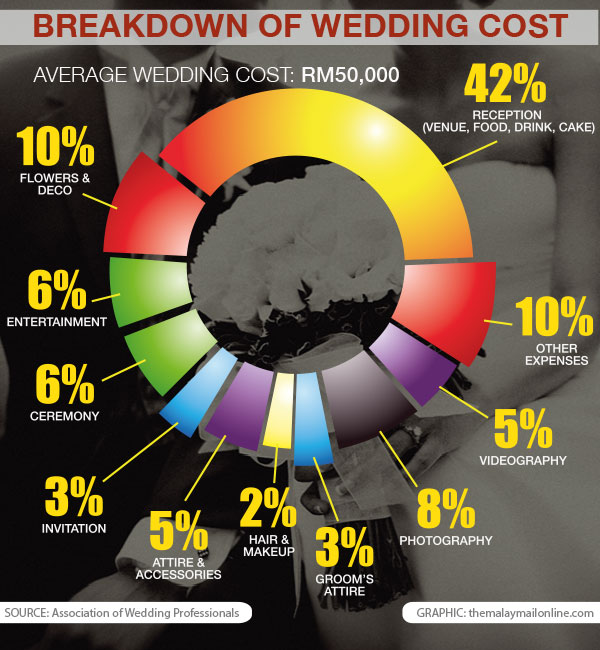 A Chinese couple in their late 20s that did not want to be named, told The Malay Mail Online that they took out a staggering RM100,000 loan to finance their RM170,000 nuptials last June.

The wedding reception of the 27-year-old woman and 29-year-old man, an online business owner and marketing manager respectively, was held at a five-star hotel.

When asked why they got into such debt for their big day instead of having a smaller wedding, they simply said, “Parents issues”, without elaborating further.

Hsu said that the wedding reception (which comprises the venue, food, drinks and wedding cake) takes the biggest share of expenditure at 42 per cent, while other expenses include flowers and decoration, entertainment, the ceremony, invitation cards, bride and groom’s attire, accessories, hair and make-up, photography, videography, and other expenses.

According to wedding planners, the dowry given by the groom’s family to the bride’s side among the Chinese ranges from a few hundred to tens of thousands of ringgit.

For the Malay community, the dowry, or “wang hantaran” gifted by the groom to the bride’s family is between RM10,000 and RM18,000 for low to medium-range weddings, and RM50,000 for high-end weddings. Indian Malaysians, on the other hand, generally do not practise the dowry custom.

Hsu observed that the wedding industry is booming in Malaysia, but said she did not have specific figures.

“These days, almost everyone is a wedding planner,” she said.

Wedding planners are increasingly popular because of time constraints resulting from both partners holding down full-time jobs, according to Hsu.

“If you ask me to give you an educated guess, five out of 10 couples would get a wedding planner,” she said, but added that she did not have statistics on the number of couples hiring wedding planners.

Hsu, who mostly organises Chinese weddings, said that her fees start at RM10,000, adding that other wedding planners usually charge a minimum of RM4,500.

Another wedding planner, Nasrul Nasaruddin, said that the average Malay wedding costs between RM50,000 and RM80,000 if it is held at a convention centre or a tent. But the cost shoots up to RM300,000, or even a million ringgit if it is held at a five-star hotel.

“For five-star hotels, the standard rate is RM200 per pax, depending on the package,” Nasrul told The Malay Mail Online at a recent interview.

The founder of Nas Great Idea added that guests usually give RM200 “angpows” (envelopes containing cash gifts) at Malay weddings held at five-star hotels, breaking away from the tradition of giving gifts. If the wedding reception is held at a tent, both gifts and angpows are generally given.

“For high-end weddings, they will have a ceremony at the bride’s, groom’s, for the media, VIPs. So, in total, three to five receptions. For politicians, they have receptions at their home state where they invite lots of people, up to 15,000,” he said.

Nasrul said that decoration is key for Malay weddings and described previous weddings he has organised, such as creating a glass floor with flowers underneath at the stage area where the “pelamin”, or the traditional wedding dais that represents the bridal couple as the king and queen sitting in state, is located.

“The trend now is for massive pelamin decoration that catches your eye. Five years ago, it was stiff pelamin decor ― flowers and pillars. Now, they transform the whole ballroom, like turning it into a garden of flowers, a Japanese garden with bonsai trees, Oriental with cherry blossoms, European with Roman pillars, or Minangkabau style, Javanese style, Acheh style, or Moroccan style with a dome and stained glass,” he added.

Nasrul, who mostly plans Malay weddings and some high-end Chinese or Indian ones, said recently that he is organising a “Chengdu style” wedding for a Chinese tycoon next year, with the ballroom lined with a structure resembling the Great Wall of China and transformed into a garden with pagodas.

The lavish wedding of celebrity couple Rozita Che Wan and Zain Saidin on December 11, dubbed the wedding of the year, was reported by Malay-language daily Harian Metro last month to have received a sponsorship of RM13 million.

The newspaper also reported that the actress would receive RM23,200 in “wang hantaran” and a wedding ring estimated to cost RM93,000.

“Wang hantaran” for the average Malay couple can be equally expensive, Dr Farah noted, saying that some of her friends had splurged on luxury watches and handbags that cost tens of thousands, despite not being able to afford them, as the “wang hantaran” is displayed prominently at the reception or ceremony.

“My friend bought a Maurice Lacroix watch, which cost RM20,000, even though he has only been working for two years,” said Dr Farah. “We live in a materialistic world.”

Excessive spending on weddings has also strained newlyweds’ relationships, with Dr Farah observing that some of her friends have even gotten divorced after splurging on their big day because of financial concerns over starting a family, or even buying a car.

Nasrul said that local weddings typically have a huge number of guests, unlike more intimate Western nuptials, because Malaysians fear offending others.

“Malaysians are very sensitive. If you hear that your friend is getting married, you will feel that there is something wrong if you’re not invited. That’s why they invite all,” he said.

He added that he charges clients between RM20,000 and RM30,000 on average to organise the decorations for their weddings, though his fees start at RM5,000.

According to Nasrul, honeymoons for Malaysian newlyweds, which are not included in the wedding expenditure, cost at least RM5,000 for local or South-east Asian spots, and above RM50,000 for trips to Europe, where the popular destinations are Paris and Rome.

Rajes Sivagamy, founder of Femina Bridal and Wedding Gallery, said that Indian weddings on average cost RM70,000 if the reception is held at a hotel, noting that costs can skyrocket up to RM200,000.

“The trend now is to have the reception at the hotel,” she added.

Rajes, who has 15 years’ experience in wedding planning, said that unlike in India, Malaysian Indian brides do not adorn themselves heavily with gold jewellery because of the rising crime rate in the city.

“Now, 90 per cent is costume jewellery. They’ll wear family gold like a chain or a gold bangle, usually just one or two pieces. In March, robbers ambushed a bride’s house in KL and stole 80 pounds of gold,” she recounted.

“For Indians, gold is very important. But because of the situation, there’s no choice but to do away with it,” said Rajes, adding that gold at Indian weddings symbolises wealth.

As tying the knot becomes increasingly expensive, Femina offers personal loans, in co-operation with AmBank, at a minimum of RM35,000 to help cash-strapped couples have their dream wedding.

“We just started this in June. So far, we have 12 customers,” said Rajes, referring to clients who took up the loans.

When asked why couples did not opt for smaller weddings instead, Rajes said that they want to have an event as lavish as their friends’, or something a little more impressive.

“When a friend has done a wedding, it’s already bench-marked,” she said, adding that Femina charges clients 40 per cent of the total wedding cost.

A senior officer with a non-bank financial institution, who wished to remain anonymous, said that couples who get into debt to finance their wedding usually take out personal loans of between RM10,000 and RM50,000, noting that the practice cuts across race.

“If they want a bombastic wedding, they’ll borrow a lot,” he said.

A survey by The Malay Mail Online on wedding packages offered by hotels, convention centres and restaurants in the Klang Valley showed that prices range from RM600++ per table of 10 diners at the four-star Crystal Crown Hotel in Petaling Jaya, to almost RM3,000++ at the five-star Mandarin Oriental Hotel in Kuala Lumpur. Prices vary for Malay, Chinese, Indian and Western wedding packages. Mandarin Oriental also has a minimum requirement of either 25 or 30 tables, depending on the package.

The Oversea Restaurant’s Chinese wedding packages range from RM668 to RM1,398 per table.

The Sime Darby Convention Centre in KL charges between RM989++ and RM1,388++ per table, depending on the type of cuisine, for a minimum of 50 tables.

Corina Chooi, 35, said that she spent between RM150,000 and RM200,000 to tie the knot in 2008, but added that she did not take out a loan for the wedding reception held at the Kuala Lumpur Convention Centre (KLCC) that hosted 700 guests.

The homemaker, whose husband is a businessman, said that having a large wedding was unavoidable as her husband has a big family.

Chooi’s husband paid for a large portion of the wedding and received some financial help from his mother and Chooi’s family. Chooi and her husband live with her in-laws, as they require their sons and family to stay together with them.

She also said that it was unwise to start married life in debt, pointing out that buying a marital home and starting a family would incur even more expenses.

“You don’t need to have a big wedding to have a memorable wedding,” said Chooi.