People unload boxes from a car in the Ukrainian city of Marhanets, on August 12, 2022 amid the Russian invasion of Ukraine. — AFP pic
Follow us on Instagram, subscribe to our Telegram channel and browser alerts for the latest news you need to know.

MARGANETS, Ukraine, Aug 18 — A hard wind blows through the Ukrainian town of Marganets. It is coming across the Dnipro river, from the Zaporizhzhya nuclear power plant occupied by Russian troops.

Kyiv and Moscow accuse each other of shelling near the facility, with rockets striking a radioactive material storage area and the global atomic watchdog warning of a “grave” crisis.

Marganets is just 13 kilometres (8 miles) away. The leafy hilltop town remains in Ukrainian control, but between the thickets and across the shimmering river are foreboding glimpses of the Soviet-era station.

“You know, if we die, then it’ll happen within one second, we won’t suffer,” 30-year-old Anastasiia told AFP on Friday.

“It calms me down that my child, and my family will not be in pain,” she said, continuing her daily shopping with morbid nonchalance. 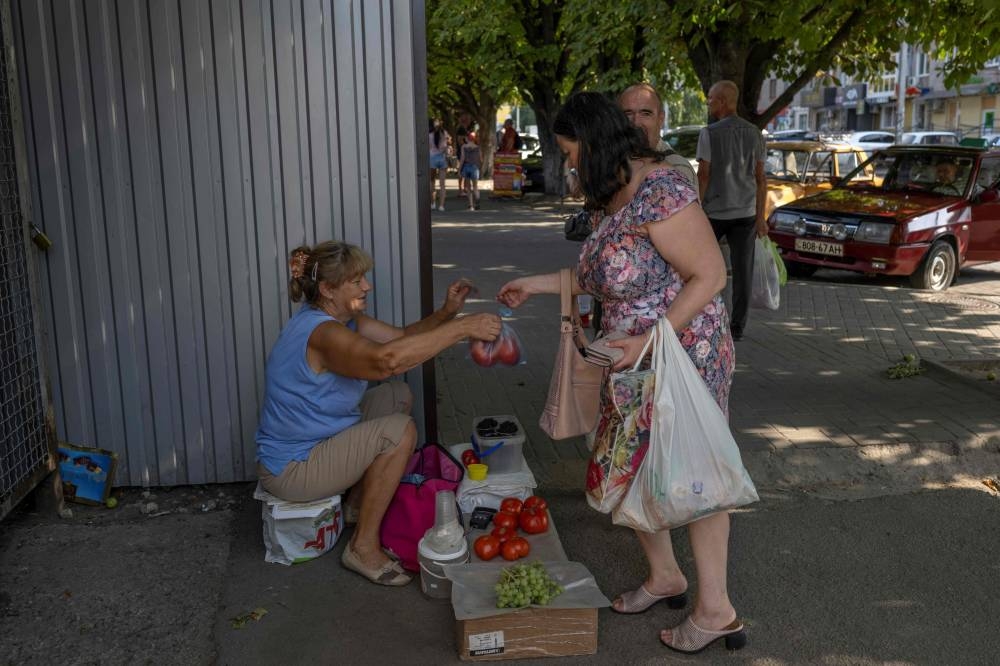 A women buys tomatoes from a street vendor in the Ukrainian city of Marhanets, on August 12, 2022 amid the Russian invasion of Ukraine. — AFP pic

The Zaporizhzhya power plant — Europe’s biggest — has been on the frontline since it was captured by Russia at the start of March, just days after Kremlin sent troops into Ukraine in a full-scale invasion.

In Marganets, the military warns against visiting the shore of the Dnipro, for fear enemy troops may take aim from opposite banks six kilometres (four miles) in the distance.

The southern town — home to 50,000 before the war — has a bustling, lively centre belying the dark thoughts and swirling rumours about the condition of the plant’s six reactors.

“I’m scared for my parents, for myself. I want to live and enjoy life in this town,” said 18-year-old Ksenia, serving customers from a coffee kiosk along the main shopping strip.

“There is constant fear. And the news says the situation at the plant is very tense, so it becomes more terrible with every passing second.”

In Marganets and Nikopol — a short distance down the Dnipro riverbank — 17 people have been killed in strikes this week, officials say.

On Friday evening the sound of the air raid siren cut above the blustering wind as the sun began to fall once more.

Ukraine claims Russia launches weapons across the river from inside the nuclear complex, with Ukrainian forces unable to return fire for fear of triggering catastrophe.

“I think the Russians are using the plant as a trump card for their own ends,” speculated 37-year-old Anton, stirring his coffee.

“A rocket hit near our house about two weeks ago,” he said. “I myself am a calm person, but one can soon become a stutterer.” People walk next to a crater left by a shelling by Russian forces in the Ukrainian city of Marhanets, on August 12, 2022 amid the Russian invasion of Ukraine. — AFP pic

In Soviet times Ukraine was the site of history’s worst nuclear disaster at Chernobyl — 530 kilometres northwest of here.

In 1986 one atomic reactor exploded and spewed huge amounts of radiation into the atmosphere. Some 600,000 people were enlisted as “liquidators”, working to decontaminate vast tracts of surrounding land.

Debate over the long term effects of radiation exposure on liquidators is one of the reasons the Chernobyl death toll is still deeply contested decades later.

The official toll is just 31, but some estimates put mortalities in the tens or even hundreds of thousands.

In Marganets there stands a monument to the liquidators, imprinted with a few lines of verse.

It reads: “Many years have passed since then, but the pain is still rife. We gave a rebuff to the atom at the cost of a young life.”

Standing at the edge of a rocket crater inflicted on Marganets overnight, 54-year-old Sergey Volokitin muses the past as a man knocks the jagged remains of nearby windows out of their panes with the back of a hatchet.

“After my graduation I worked at the mine, and in my team there were two people who were liquidators,” he recalls. “We knew everything that happened there.”

“We know the results of radiation, and what the consequences will be if something happens.” — AFP