Organic farmer Gene Eu's farm in Bukit Tinggi, Pahang has not only specially-bred dogs to chase pests away but rescued strays as well — Picture courtesy of Gene Eu
Follow us on Instagram, subscribe to our Telegram channel and browser alerts for the latest news you need to know.
By Sylvia Looi

KUALA LUMPUR, June 29 — Organic farmer Gene Eu returned to Malaysia after 20 years in the United States with the intention of starting an organic farming venture.

His plan took him to Bukit Tinggi, Pahang, some 40 minutes from here, in January 2020 where he found a 28 hectares fruit orchard.

Instead of relying on pesticides to control pests such as monkeys, Eu depends on his specially-bred dog called Bell Griffin that is a cross of Hungarian komondor sheepdog, standard poodle and English Springer spaniel for the job.

In addition to this, Eu has recently started rescuing strays that are then housed at the farm after they nursed back to health.

His latest rescue, Eu said, was a mother with four of its puppies that were found near Bukit Tinggi town.

“When I saw them I told myself I better rescue them or else they risk getting run over by passing vehicles.

“Strangely all my rescues are females,” he said, adding that the dogs are mostly dumped by other farm owners.

Now there are 26 dogs in Eu's farm including the first group that were brought back from the US.

“It took me about a decade to come up with the breed which was developed during my stay in the US,” he said. 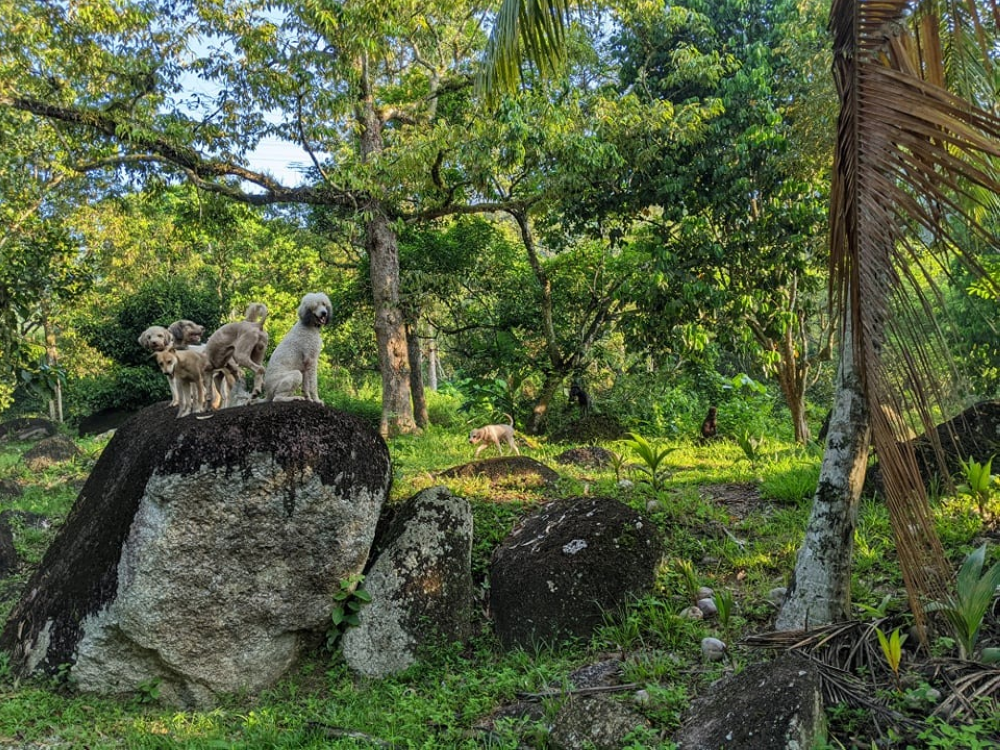 Organic farmer Gene Eu's farm in Bukit Tinggi, Pahang is a haven for his dogs. — Picture courtesy of Gene Eu

Eu added when he decided to return to Malaysia, he transported all 16 of his specially bred dogs back from his North Carolina farm.

“With the dogs' assistance, the Bukit Tinggi farm started to see produce such as kampung durian, duku langsat, mangosteen and rambutan after being barren for several years.”

He said the 16 dogs helped him to look after his North Carolina farm.

“They are about two or three times larger than a normal dog with no high play drive but are protective at the same time.

“When they were helping me in North Carolina, they managed to keep bears and coyotes at bay.”

Since returning to Malaysia, Eu has bred the dog twice but mainly to keep the bloodline going.

Eu said if farm owners are uninterested in getting such breed dogs to look after their farms, they could also get a pack of dogs for the role.

“Although local dogs are smaller in size, pests can be put off if there is a large group of dogs.”

Eu said three dogs from the initial group had since passed on.

“I now have 13 local dogs and 13 bred dogs.” On the farm's future plans, Eu said he was looking into turning a section of the farm into a glamping site.

“The farm has a waterfall, river and a spring.”