After viral video of baby panda, Zoo Negara panda keepers share what it takes to care for the animals (VIDEO)

KUALA LUMPUR, May 13 – It was just another normal day for zookeeper Azrenizam Ibrahim, who was on cleaning duty at the Zoo Negara’ Giant Panda Conservation Centre.

Little did he know that he was being closely watched by a sneaky menace who were hiding around the enclosure waiting for her chance to pounce.

Not at the zookeeper, rather her aim was the big black thing Azrenizam was holding—a black trash can.

Leaping from the bushes, surprising the zookeeper who was trying to do his job, the little cub “attacked” the trash can that Azrenizam was holding – and a battle took place between the less than a year old panda cub against the big black trash can.

Azrenizam who was caught in the middle of the fight had to involuntarily join in the rumble to save the trash can from the panda cub who later chased him around the enclosure for taking it away from her.

That basically sums up the TikTok video shared by Zoo Negara last month which has amassed over two million views.

The zookeeper told Malay Mail that the cheeky yet-to-be-named panda cub was supposed to join her mother in the den that day, but she managed to sneak away from him and hid herself in the enclosure.

This is nothing new to Azrenizam as he has been taking care of these pandas for almost eight years now and at that age, panda cubs are known to be very playful.

The zookeeper also pointed out that even though it’s still a cub, he still needs to look out for its claws and sharp teeth.

“The bites are quite painful, that’s why in the video you can see me climbing on top of the platform, to avoid getting bitten by the cub.

“Plus, their teeth are strong and instead of just regular teeth, they have sharp fangs,” he said.

However, the zookeeper added that even though they can be rough, these pandas are gentle and needy creatures.

“Pandas are odd creatures. Their personalities, the way they eat, their attitudes, it’s hard for me to explain, but they like to be persuaded.

“Unlike other animals where they would come just by hearing their names being called but with pandas, you need patience,” Azrenizam told Malay Mail. 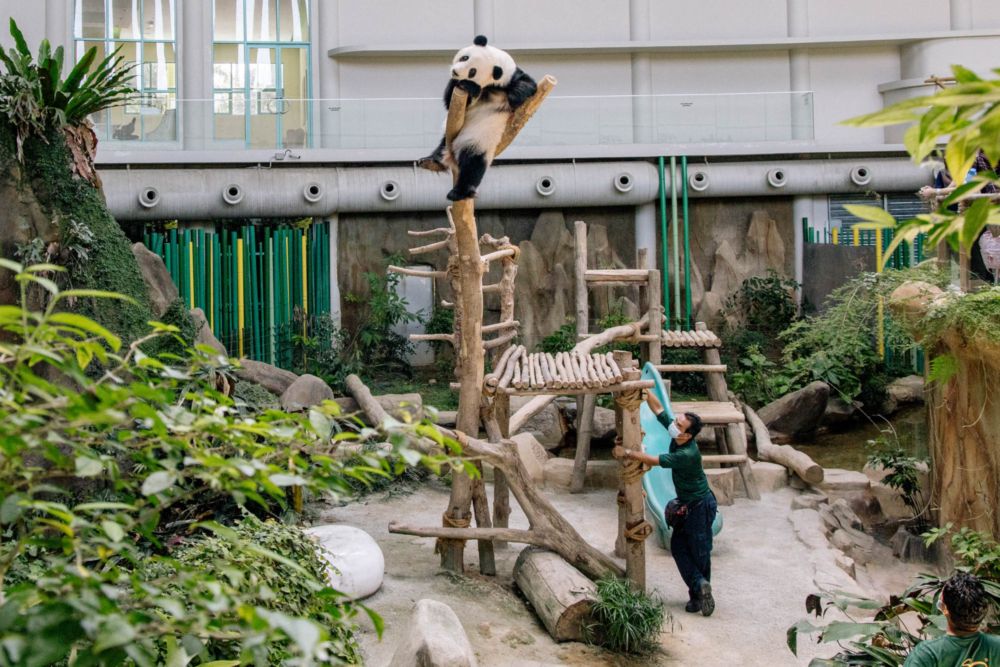 YiYi the four-year-old giant panda was supposed to go back to her den, however, she has other plans. Zookeeper Azrenizam Ibrahim can be seen persuading her to come down. — Picture by Firdaus Latif

At the moment, Zoo Negara is currently hosting three adult pandas and one baby panda who is turning a year old this May 31.

A team of six people were given the responsibility to look after these pandas which consists of zookeepers and vets.

Zoo Negara assistant curator Ahmad Nizam Zainudin said some of the usual shenanigans from these pandas include the female panda wanting to eat when the male panda is given food.

“So as keepers, we need to calm them down. So, we would pet them and talk to them, ask them what’s wrong and persuade them. eventually they’ll continue eating,” Nizam said.

This is followed by 800 grams of homemade panda cake, one kilogram of apples and pears as well as three kilogrammes of bamboo shoots.

The panda cakes function as a supplement to these pandas and the ingredients include eggs, corn flour, sugar, salt, soybeans, and rice which are made from scratch by the keepers.

On average, one adult panda would usually consume up to 20 kilogrammes of bamboo and the zookeepers would usually collect the panda’s excrement to determine how much food they’ve consumed that day. 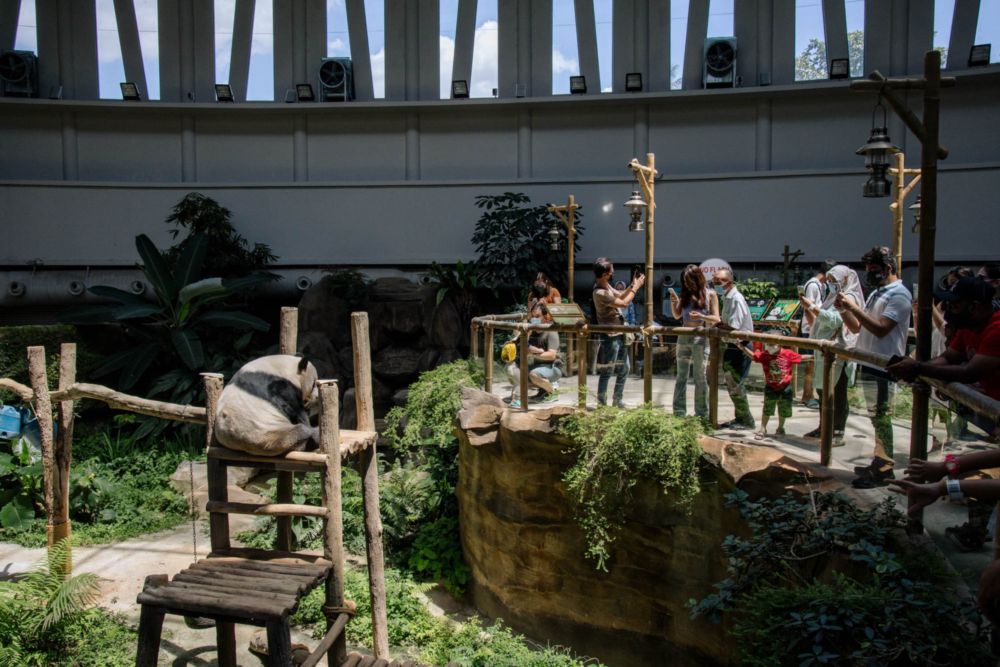 When talking about the panda enclosure, Nizam highlighted that the enclosure was designed and set according to the panda’s chilly habitat with a temperature set below 25 celcius.

The enclosure is also filled with platforms and toys such as a hanging wheel and barrels as well as slides so the pandas can have some activities that can further enrich their lives.

“We can’t just let them play on a flat cement, so we’ve put in the platforms, built a mini bridge for a bit of enrichment for them.

“We also have barrels that we fill with stones and we also put some treats all over the enclosure as well as inside the barrels for them to hunt,” Nizam said. Zoo Negara has accepted to host these giant pandas as part of the Giant Panda Conservation International Cooperation Agreement between the Malaysian and Chinese governments under the China Wildlife Conservation Association (CWCA).

The agreement was signed for a period of 10 years starting from 2014 with the arrival of the pair of giant pandas; Xing Xing (male) and Liang Liang (female).

Since their arrival in Malaysia, the giant panda has given birth to three cubs, one is named Nuan which have been sent back to China in 2017 while the other two cubs, Yi Yi and the yet-to-be-named cub are still in Malaysia.

Lucky housewife from India finds 2.08 carat diamond worth over RM56,000 in shallow mine