Chen Kun-huei, 82, works at his joss paper workshop which was started by his grandfather ahead of Lunar New Year in Miaoli, Taiwan January 20, 2022. — Reuters pic
Follow us on Instagram, subscribe to our Telegram channel and browser alerts for the latest news you need to know.

Taiwan’s Chen Kun-huei, 82, is determined to keep alive an ancient tradition of making the “ghost money” by hand even as others have shifted to automated production at factories.

“I will continue making ghost money until I can’t move anymore,” said Chen, the third-generation owner of his family’s business in northwestern Taiwan’s Miaoli.

Altogether, the Chens have been making ghost money for around 100 years.

Also called joss paper in English, ghost money is one of the most common offerings in Taiwan, burned at temples and outside homes to honour deities and ancestors while praying for many children, prosperity and longevity. 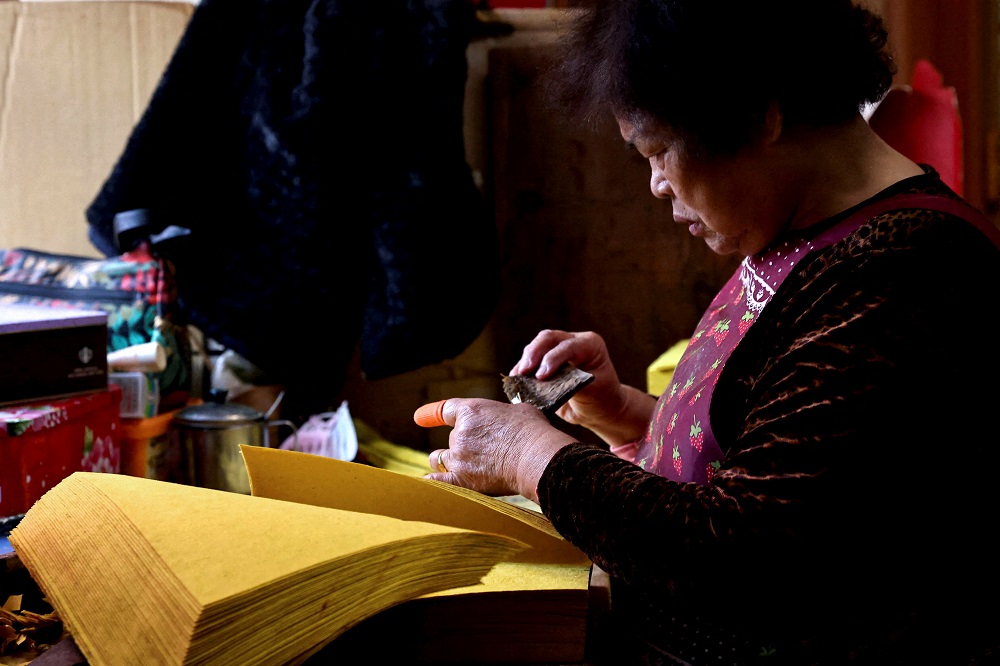 It is used during all holidays in Taiwan — Chen says there is only one month of downtime in a year — with the most offerings made during Lunar New Year and the “ghost month”, or the seventh month of the lunar calendar.

“There are just too many temples in Taiwan,” said Chen’s daughter, Chen Miao-fang, explaining why demand for ghost money remains high. After growing up in and around the workshop, Miao-fang is now in charge of taking orders.

The Chens’ way of making ghost money is fading quickly due to a lack of people willing to do the repetitive work and competition from big commercial printers producing cheaper, colourful alternatives. Only a few other workshops also still make the sacrificial paper by hand.

“In the future this might all be replaced by machines,” Miao-fang said, looking around wistfully at the family’s small-scale operation. For now, the Chens have a loyal base of customers who value the high quality of their product.