Britain’s Queen Elizabeth arrives for the ceremony to mark her official birthday at Windsor Castle in Windsor, Britain June 12, 2021. ― Reuters pic
Follow us on Instagram, subscribe to our Telegram channel and browser alerts for the latest news you need to know.

The ceremony honouring fallen troops is close to the monarch’s heart and her absence will deepen concerns over her health after she stepped back on medical advice and spent a night in hospital undergoing unspecified tests at the end of last month.

She then resumed “light duties”, but pulled out of a scheduled attendance at the UN climate change summit in Glasgow after being advised to rest.

“The Queen, having sprained her back, has decided this morning with great regret that she will not be able to attend today’s Remembrance Sunday Service at the Cenotaph,” a palace statement said.

“Her Majesty is disappointed that she will miss the service.”

Her son Prince Charles will lay a wreath on her behalf, as in previous years.

Charles and his son Prince William represented the family in Glasgow, making a series of speeches.

A two-day trip to Northern Ireland was also shelved as was her appearance Tuesday at the General Synod, the national assembly of the Church of England which she heads.

The 95-year-old was due to view Sunday’s annual service in London from a balcony, as she has done since 2017, when she handed over some duties to younger members of the family.

“Mindful of her doctors’ recent advice, The Queen has decided not to attend”, the statement said. 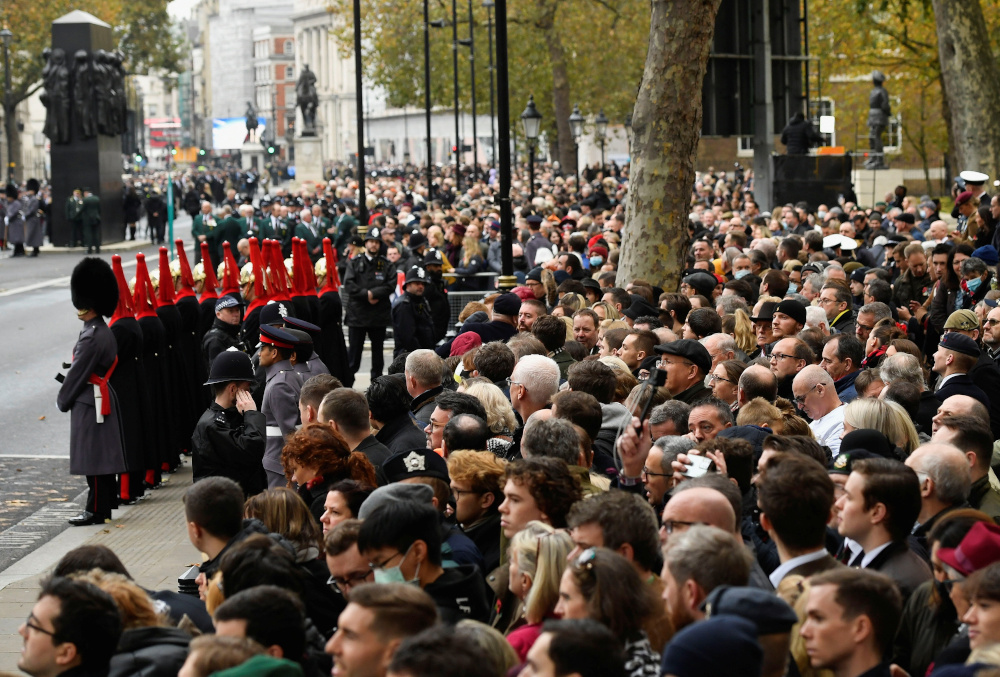 Queen Elizabeth II succeeded her father, King George VI, in 1952 and next year is her Platinum Jubilee, marking her 70th year on the throne.

She returned to her Windsor Castle residence, west of London, on Tuesday, after a long-planned weekend away at her Sandringham estate in eastern England.

The palace has previously said it was her “firm intention” to attend Sunday’s Remembrance event, which brings together veterans, their families and political leaders.

The Queen, who also pulled out of the separate Festival of Remembrance event yesterday, is head of the Armed Forces and served as a mechanic during World War II.

Royal aides have blamed a busy recent schedule that had left her “exhausted” but she was recently seen driving in the grounds of Windsor.

She took a step back from work on October 20, the day after a reception at Windsor Castle where she chatted with Prime Minister Boris Johnson and US billionaire Bill Gates.

She spent the following night in hospital, her first since 2013, where Buckingham Palace said she underwent “preliminary examinations”.

The monarch had appeared in strong form in public until recently, despite the loss of her 99-year-old husband Prince Philip in April.

She had attended official engagements almost daily, similar to her pre-pandemic workload, since returning from her traditional summer holiday in Balmoral, Scotland.

But she made the headlines recently after being seen walking with a cane, and The Sun tabloid reported she had stopped walking her corgis in recent days.

The Queen is reported to no longer ride her horses, a keen passion, although she plans to take it back up again after resting. She is also believed to have given up drinking alcohol.

At a public event in Brixton, south London, on Thursday, her eldest son and heir was asked by one onlooker: “Prince Charles, how is your mother?”

What is a biophilic office? How plants can boost productivity and well-being