Breakfast Cure came under fire for claiming to have made improved congee dishes for the Western palate. — Picture via Instagram/breakfastcure
Follow us on Instagram, subscribe to our Telegram channel and browser alerts for the latest news you need to know.
By ANNE GRACE SAVITHA

PETALING JAYA, July 23 — American brand Breakfast Cure has apologised after its claims on its take on congee for the Western palate caused a stir on social media.

“Recently, we fell short of supporting and honouring the Asian American community, and for that, we are deeply sorry,” it said in a statement.

“We take full responsibility for any language on our website in our marketing and have taken immediate steps to remedy that and educate ourselves, revising our mission to not just create delicious meals, but become a better Ally for the AAPI community.”

Like a broken record, I must say that it’s unbelievably annoying to see white people “interpret” cultures of millions and billions of living people like they’re archeologists 🤦🏻‍♀️

Being treated like we are dead makes me want to lie down.

“Like a broken record, I must say that it’s unbelievably annoying to see white people ‘interpret’ cultures of millions and billions of living people like they’re archeologists.”

Another user Vanessa Nolan shared a screenshot of the brand’s description which has since been deleted, states how improved versions of the dish is deliciously designed to delight the modern palate. 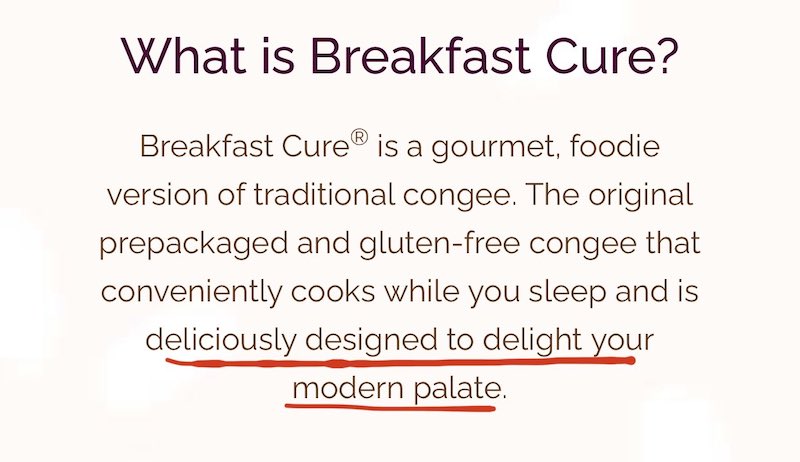 The brand's description. — Picture via Twitter/VanessaNolan.

“Yup, they’ve gone out of their way to make it non-disgusting for your ‘modern palate’. Don’t worry white people, you’ll like this.”

Twitter user JC Lau wrote, “I love how it is described as ‘gluten-free’ like this is a revelation or something, because congee is made from rice, which does not contain gluten.”

So a group of colonizers decided to culturally appropriate congee. Good lord. pic.twitter.com/NSPoMPczRQ