The dance of dolphins at Porpoise Bay, New Zealand

THE CATLINS (New Zealand), May 6 — There were seagulls screeching over our heads. A pair of oystercatchers resting on the beach, easily recognisable thanks to their black plumage and orange bills.

But our eyes were affixed on the crashing surf ahead, scanning for sleek shapes gliding through the water. We were looking for dolphins.

Earlier that morning we had left Dunedin and driven south towards the Catlins, a rugged coastal region in the south-eastern edge of New Zealand’s South Island. The roads weaved before us. Sometimes we’d see the sea; sometimes we won’t.

The Pacific Ocean was often just a glint of the sun on the water.

Eventually we reached a row of houses — motels, we learned — and found our own abode for the night. No one to greet us but our room keys were left in the lock; this isolated, everything felt safe.

We entered, dropping our bags and were ready to fall into bed ourselves in a post-drive slumber. But then the view outside our room made us change our plans in a heartbeat. Just steps away: From the room to the ocean.

Instead we headed straight for the verandah, through the sliding doors and down to the beach and the sea. We took in the wide expanse stretching before us, the horizon melting any division between sea and sky. Everything was so blue and clear and almost surreal.

This was Porpoise Bay.

What is a porpoise, some of you might wonder. I certainly did as a kid when I first read Alice’s Adventures in Wonderland by Lewis Carroll.

There is a chapter in this children’s classic where our young protagonist meets the strange Mock Turtle and Gryphon by the sea. The very definition of an odd couple.

The melancholic Mock Turtle started singing to Alice, while demonstrating how to dance the Lobster Quadrille (don’t ask, it was a delightfully bizarre book, perfect for impressionable minds). It started with these two lines: 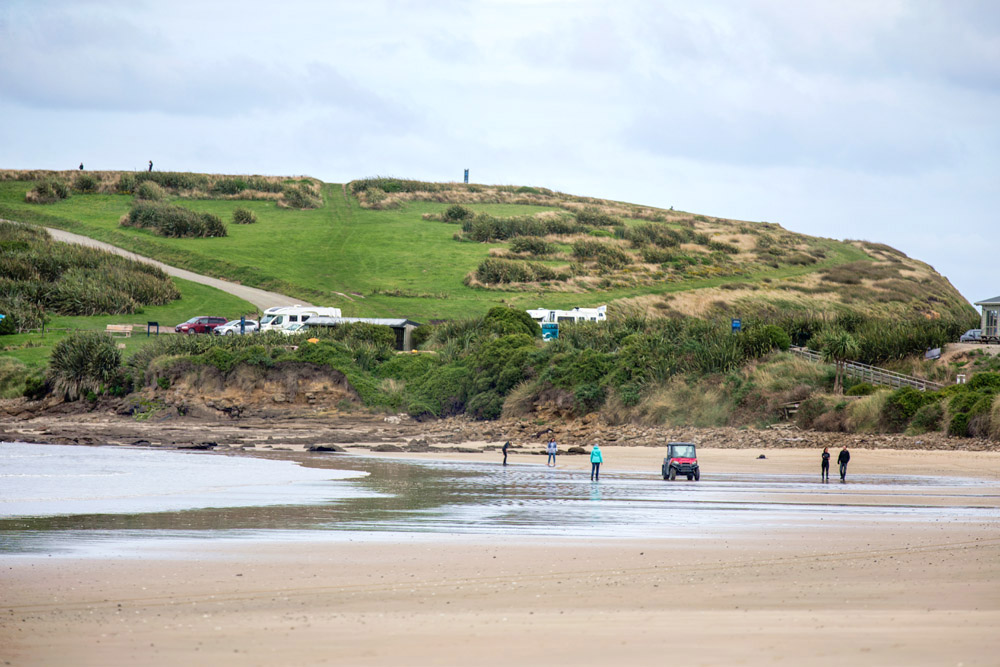 “Will you walk a little faster?” said a whiting to a snail.

“There’s a porpoise close behind us, and he’s treading on my tail.”

I imagined a porpoise to be a gruesome creature of the ocean with tremendous feet. You wouldn’t want to be trodden by those giant, marine hooves.

Then I consulted an encyclopedia (this was the time before Google, you see) and discovered that porpoises are aquatic marine mammals that looked not unlike dolphins. They lack a pronounced beak or “snout” and therefore can be distinguished from a true dolphin.

We would soon learn that appearances can be deceiving but that is later.

Our feet sank into the sand as we made our way down to the beach. Past the brush, we observed barely any other footprints besides ours. 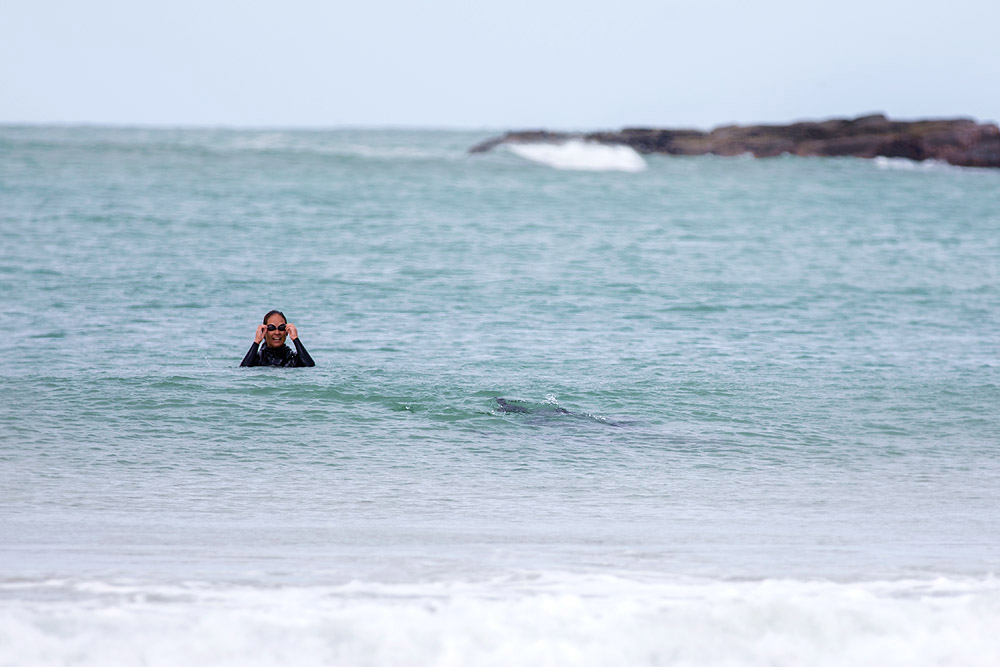 Finally we reached the water’s edge, the soft waves lapping at our feet as they dissipated on the shore. In the distance were larger waves, rolling and thunderous.

That’s when we saw them: Dolphins!

They are some of the tiniest dolphins in the world; certainly some of the rarest with only about 7,000 to be found only in New Zealand, particularly around the South Island.

Perhaps that explains the name of the bay: Hector’s dolphins are some of the very few dolphins that lack a pronounced beak... just like a porpoise. Perhaps the early settlers were confused. Certainly we wouldn’t have known better.

Appearances can be deceiving. A pair of oystercatchers resting on the beach.

Here in Porpoise Bay, the resident population is made of a small pod numbering fewer than 20 animals. For all that, these Hector’s dolphins are far from reclusive and come out to feed close to shore. They catch fish, squid and crabs, and when they are sated, they look to play.

Bearing in mind that they are still wild animals, so the official advice is avoid feeding or approaching them. Judging by how they circled an astonished swimmer naughtily, these graceful creatures of the sea will come to you if they fancy.

What a lark! What fun!

We were spellbound. Soon we were joined in our contemplation by another, an American. She told us she was a visitor too, staying at a different motel at the other end of the beach. Here for a week already, she shared, taking a long walk along the beach every day.

“Beautiful, aren’t they?” she said. “They’re very friendly and they like humans.”

We like them too, we told her. She smiled and told us to enjoy our day, before walking away. We stayed a bit longer before the wind got stronger and it became too chilly to remain on the beach wearing just a single layer. 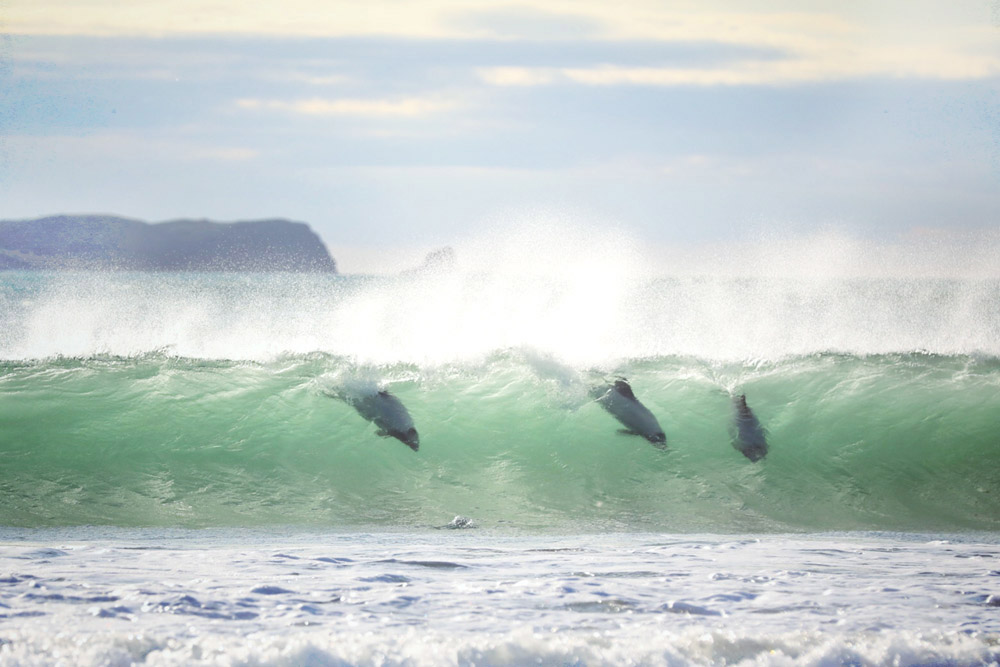 Reluctantly we trudged back to our motel room. A shower to wash away the grime of a full day of driving, and a nap to recuperate.

We woke up half an hour later. The light was already changing; the sky exploding in a dramatic burst of colours. It was sunset.

Too late to go back down the beach to look for the dolphins again; we wouldn’t be able to see a thing. Tomorrow, then.

We were refreshed and replenished by our earlier encounter though. We were moved by those elegant shapes in the water. Perhaps the dolphins had taught us something we never knew we needed to understand.

Which brings us back to Carroll’s mournful and tetchy Mock Turtle. He had a schoolmaster called Tortoise, who in fact was an old turtle... 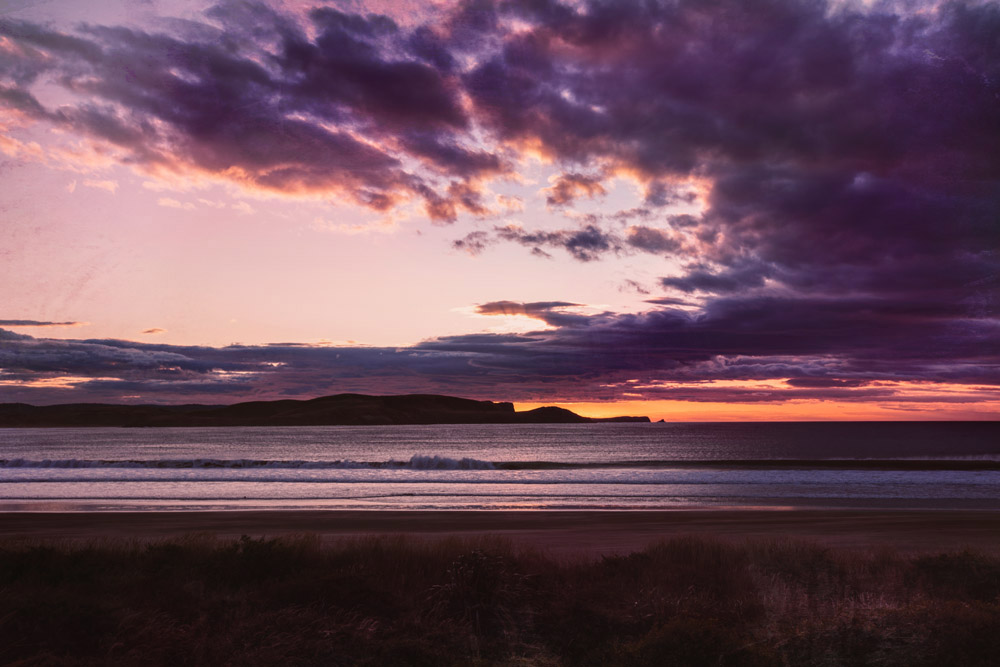 A dramatic burst of colours during sunset.

“Why did you call him Tortoise, if he wasn't one?” Alice asked.

“We called him Tortoise because he taught us,” said the Mock Turtle angrily: “really you are very dull!”

My silly remembrances of Carrollisms aside, perhaps there is some truth here. Or a simple lesson if we are open to it.

That it is better to be thought odd and be ourselves than to conform and be very dull. That it is more than okay to be silly — it is FUN! That we could all do with a bit more jolliness in our lives.

Perhaps it is time to try singing and dancing the Lobster Quadrille after all. We might amuse the dolphins, if we meet any; we’d certainly amuse ourselves and others.

What a lark! What fun!