At first art exhibition in George Town after CMCO lifted, 40pc of artworks sold over the weekend

A visitor admiring the artwork at the ‘Boxed In (one foot at a time)’ exhibition, held at the Hin Bus Depot exhibition space in Penang. — Pix by Steven Ooi KE
Follow us on Instagram, subscribe to our Telegram channel and browser alerts for the latest news you need to know.
By OPALYN MOK

GEORGE TOWN, Dec 14 — The first art exhibition to be held here immediately after the conditional movement control order (CMCO) was lifted was a resounding success with about 40 per cent of the artwork sold over the weekend.

“Boxed In (One Foot At A Time)”, held at the Hin Bus Depot exhibition space, opened on December 12 and attracted visitors from other states. The ‘Boxed In (one foot at a time)’ exhibition, held at the Hin Bus Depot exhibition space, opened on December 12 and had attracted visitors from other states.

According to curator Ivan Gabriel, they already sold 17 of the 43 artworks on display.

“We also had buyers from Kuala Lumpur who did cash and go,” he said. 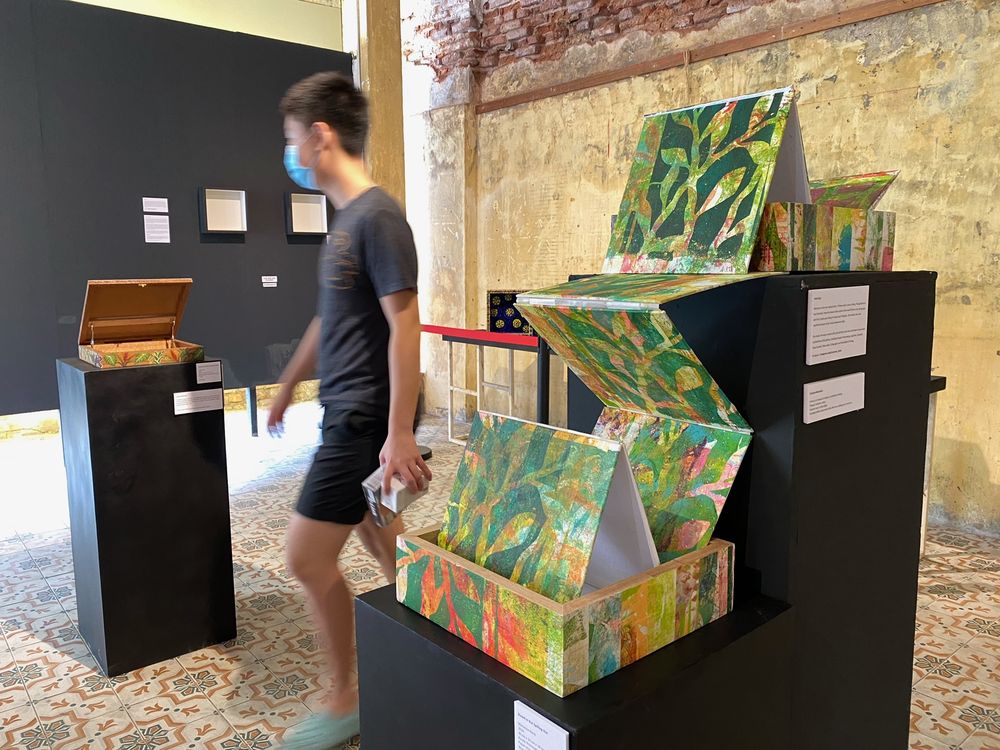 The Boxed In exhibition is open from 11am to 7pm until December 31.

He added that the brisk sales was a great encouragement to the artists as some had declared their work “not for sale”, thinking that artworks might not sell during the Covid-19 pandemic.

“However, some buyers actually requested to purchase them regardless of that fact, and those ‘not for sale’ ones were also sold,” he said.

“Boxed In” was originally a virtual art exhibition launched online on December 1 and some of the artworks were sold through the virtual platform.

Ivan said there were “live” sharing sessions by the artists on Zoom and that introduced some of the artworks to the public online.

A total of 27 artists showcased 43 of their artworks, all with one similar theme — their interpretation of thinking outside the box by creating artworks using two 12-inch square wooden boxes. 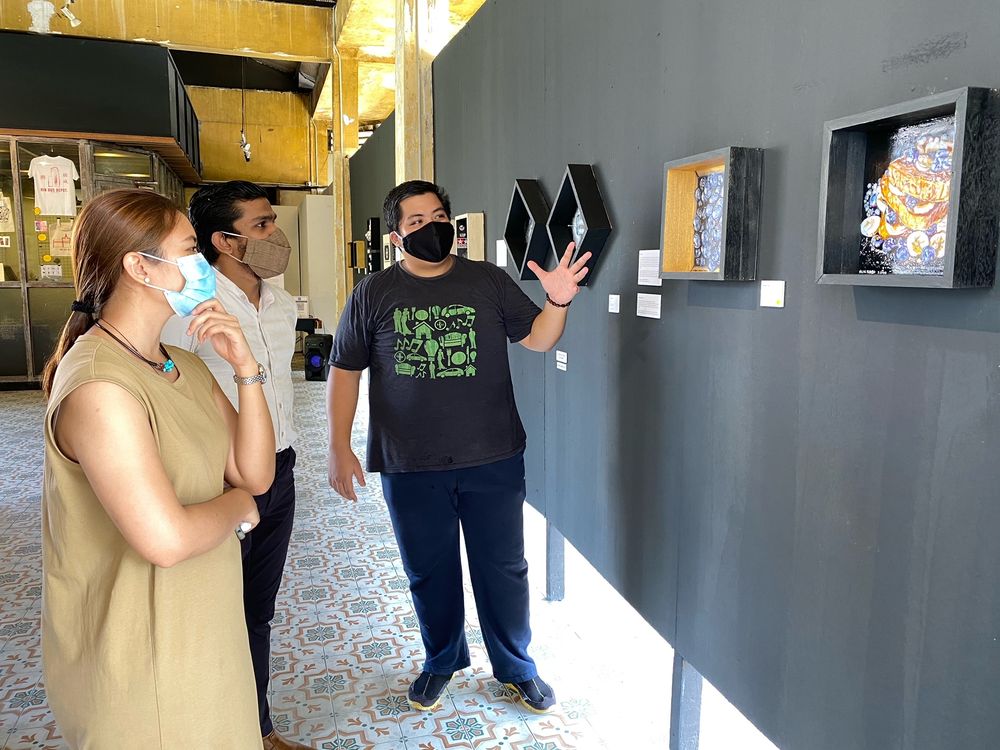 One of the artists, Nasir Nadzir (right) who painted blueberries inside one box and French toasts topped with blueberries and bananas in another box explaining the rationale behind his artwork to Ivan and gallery manager Wanida Razali.

Ivan said some of the artists explored current issues such as being literally “boxed in” due to the movement control order (MCO) earlier this year and also explored mental health issues due to the pandemic and lockdown.

One of the artists, Nasir Nadzir, painted blueberries inside the box before the MCO and was planning to pair it with a painting for blue rubies in the second box.

However, the MCO gave him time to change his perspective as he longed to spend time in a cafe during the lockdown so he can enjoy French toast topped with fresh fruits.

That longing became the inspiration for his second artwork, a painting of French toast topped with blueberries and bananas.

Another artist, Lijynn, painted the boxes white to represent spaciousness and a way to heal through deep, calm breathing.

It was her way of creating an art piece to become an instrument in relieving the stresses of the recent uncertainties due to the pandemic. 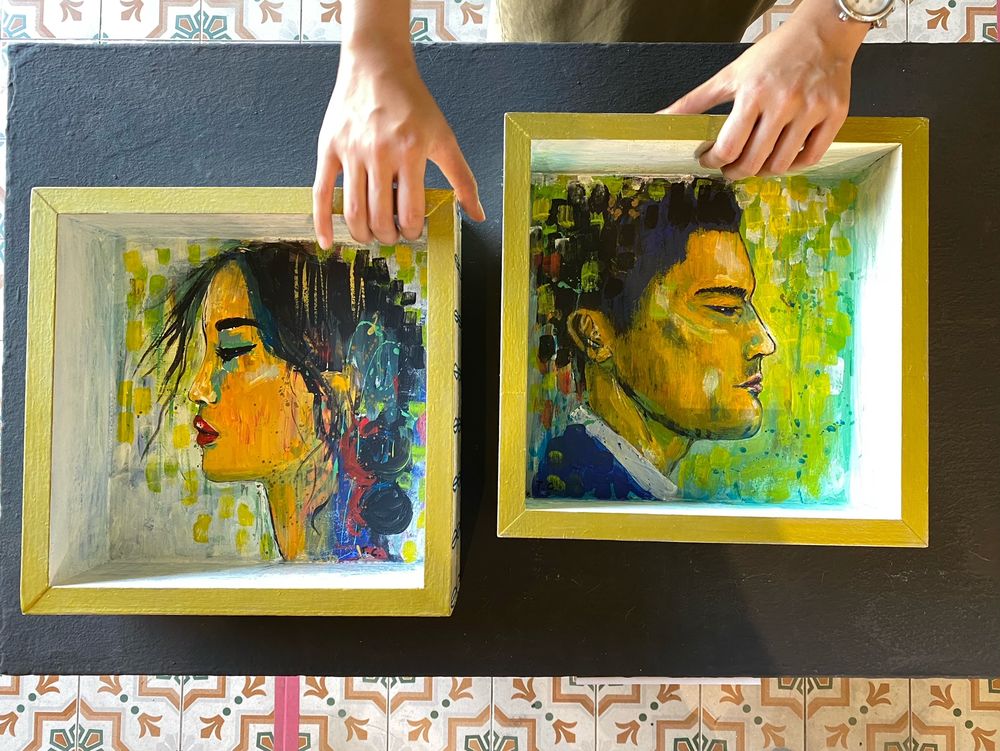 Interactive artwork by Tiffany Choong titled ‘Internal Monologues’ that allow visitors to arrange the position of the boxes that featured a male and a female head each.

Ivan said there are empty spaces at the exhibition that were deliberately left vacant as some artists were unable to participate because they had to leave and return to their home country due to the pandemic.

With the brisk sales over the weekend, he said there are now more empty spaces to add more depth to the curation.

All of the artists, though many are locals, are Penang-based including foreign artists who have made Penang their homes.