A student stands on top of a red BMW, as the group brought traffic to a standstill at Klebang, Melaka yesterday. — Picture from Facebook/ We Are Malaysians
Follow us on Instagram, subscribe to our Telegram channel and browser alerts for the latest news you need to know.
By MARK RYAN RAJ

PETALING JAYA, Nov 28 — Celebrating and letting off steam once you’ve finished a long and gruelling period of studying is understandable.

A  group of students in Melaka however took it too far when they  took to the streets in a convoy of motorcycles and a BMW yesterday, to rejoice in their newfound freedom after completing their Sijil Pelajaran Malaysia (SPM) examinations.

A Facebook post on the Melaka Daily and We Are Malaysians page showed the crowd of students gathering on their motorcycles at a busy intersection in Klebang, Melaka, at about 1pm yesterday.

While a similar group was also spotted near famed tourist spots like Pantai Puteri and Bandar Hilir, the students in Klebang caused a ruckus at the traffic lights as they circled the red BMW, cheering on a few students who were pictured standing on top of the car and hanging out of its windows.

Apart from the noise, students were spotted smoking and performing stunts, forcing other motorists to move out of their way.

According to Harian Metro, the Melaka investigation and traffic enforcement department head Superintendent Hasan Basri Yahya said investigations were made at two locations, in Bandar Melaka and Klebang as soon as the SPM exams finished.

“As many as 17 summonses were issued to the motorcycle riders involved after they were found guilty of violating traffic laws.

“Among the offences were no registration numbers for the vehicles, no driving licenses, not wearing helmets and not obeying traffic directions.”

He added that a total of 13 students were apprehended, aged 16 to 17, before being released after having their statements were taken.

Social media users weren’t too impressed either by the students’ actions as they criticised them for “over-celebrating” and being a disgrace. 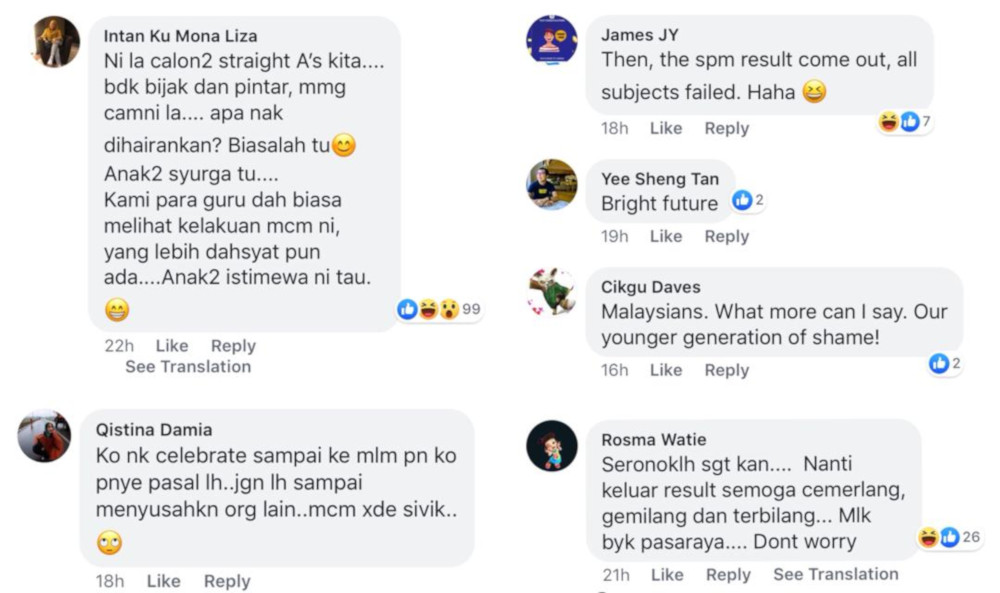 Social media users condemned the students for their inappropriate behaviour during their celebrations. — Screengrab via Facebook/Melaka Daily & We Are Malaysians

“Us teachers are used to seeing things like this, some of which are even worse than this,” wrote a user.

“I hope when the results come out all of you get brilliant and terrific results,” wrote another.

Others felt said they felt ashamed that their “future leaders” were behaving in such a shameful manner.

At this university, students can take a well-being course to boost their mental health

Does wine consumed on vacation taste the same at home?