oBike rolls out bicycle-sharing system in the Klang Valley

KUALA LUMPUR, July 9 — Have you noticed rows of yellow bicycles parked around certain areas in the Klang Valley?

The eye-catching fleet of bicycles are from Singapore-based oBike which launched the bicycle-sharing system here in mid-April.

So far, there are more than a thousand bicycles available. In Singapore, the company started business in January and up to March, they have chalked up 500,000 users in Singapore and now there are plans to launch in Taiwan.

What’s different about oBike is that it is station-less. “As you can see, you don’t need a physical station to lock the bikes. The lock is integrated in the bike itself,” said Elaine Chan, marketing manager of oBike Malaysia.

“You can park anywhere you want as long as you don’t block traffic and walkways. This is what we are doing now and we are also working with the local authorities to set up designated parking spots,” she added.

Riding an oBike is simple. Just download the free app, scan the lock with the built-in barcode scanner within the app and it unlocks the bicycle.

Using the app, there are a few ways to look for a bicycle. The first one is to turn on your GPS and see if there are any bicycles near you.

Another is a search method that has a map where you can type the name of the area such as Damansara Uptown and the app will show you bicycles that are unused.

A refundable deposit of RM129 for adults and RM79 for students is required to ensure that the users are responsible for the bicycles.

The minimum age to use the oBikes is 12. All oBike users are also covered with insurance. Each ride costs RM1 for 15 minutes. “How we are charging is by time block so our charges are based on every 15-minutes, if you ride for 30 minutes we will charge you RM2.

The bicycles come in two different sizes, the full specification one has a basket, headlight and is 22-kilogrammes while the smart version is 14.5-kilogrammes.

Every oBike spot has two types of bicycles for users to choose. “The bikes are a standard size that cater to all age groups and sizes but in terms of build itself, the way the bike is built it’s very low maintenance and durable at the same time. For instance, it is made of an aluminium body and the tyres are tubeless so it doesn’t puncture easily,” said Chan.

According to Chan, oBike’s ultimate goal is to solve the first mile and last mile gap. For instance every time we go out we will use Grab, Uber or the train but it’s that kind of distance from your doorstep to the train station, that gap you are still trying to get there by walking... that one to three kilometres — that first and last mile that oBike’s trying to solve.

She said that oBike’s not trying to eliminate Grab or Uber but it is another alternative for short distance travelling at your fingertips so train stations would make sense to have oBike available as well. 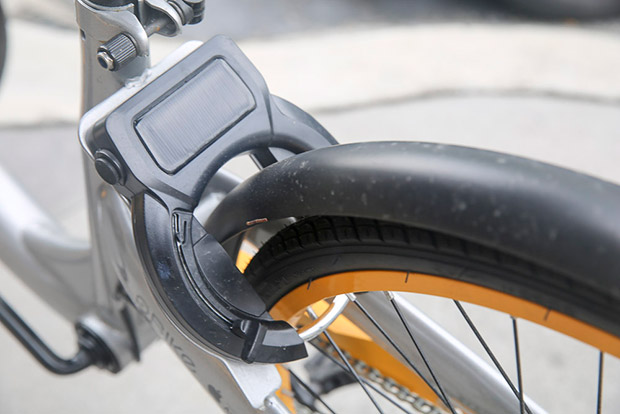 Chan also explained that users can drop the bicycles anywhere they want but with more parking spaces available, it would be easier. At this stage, oBike has an on-ground team of 10 to 11 personnel that pick up the bicycles, arranging them and relocating them once the users have parked the bicycles.

Daily checks on the bicycles are also done. Users can also report faulty bicycles that will be picked up and repaired.

Education is important when it comes to using oBikes so Chan advised that if you bring your oBike home, make sure it is not in your home compound area but at an accessible area, like the guardhouse for pick-up or other users.

All the users’ data are trackable such as where they go, where they turn on and turn off their app.

This helps oBike identify demand like where would people usually want to have a bike. The data can also be shared with the local authorities to be utilised towards town planning.

Chan said that currently, oBike is in talks with the property developers to expand into housing areas and train station companies.

As the service is new, oBike also tests out areas like Damansara Uptown to gauge the customer’s responses. oBike is also in talks with universities to allow students to use their services in the campus to get to classes.

Based on oBike’s analysis, about 40 per cent of oBike’s users are students because most of them don’t own a car. “They live on-campus, they don’t own a car but they want to travel, for instance like Sunway, within itself, you can travel a lot.

“We are trying to expand not just the number of bikes but more on the spots because it’s human behaviour. If you don’t see a lot, it doesn’t give you that convenience. If you see only here and the next one is Kota Damansara, it’s like where do I drop it and where do I find another one.

“So you can actually drop it anywhere as long as it’s public and can be accessed by another user and it doesn’t block walkways or traffic,” said Chan.

In terms of vandalism or damage, Chan shared that it’s less than one per cent. As long as you lock the bicycle back and it’s nothing major, oBike doesn’t penalise the users.

The deposit itself helps users take responsibility of the bicycles they rent. Also, oBike has been actively organising events to educate users on how to use oBike.

“We are talking to people in social media and users can connect to us through Facebook as well. Some users don’t know about oBike at all, they just saw the bike and they go on Facebook and ask us in Facebook about oBike,” said Chan.