Sensing a business opportunity, Edmund Soon from Heritage Village decided to serve the noodles at his cafes in Publika and Paradigm Mall from January 23 onwards.

“People were curious as some could not get the original item,” explains Soon.

When Soon decided to start the promotion, he had trouble finding the instant noodles himself. “That was a tough one that saw us hunting high and low but we eventually found one supplier that could deliver, “ says Soon. The restaurant purchased a total of six cartons.

Once word got out via the restaurant’s Facebook page, customers trickled in during the weekend to sample the noodles and wiped out half of Soon’s stock.

“Response was so good, since the launch during the weekend that we managed to sell three cartons at the two outlets.”

For the promotion, Soon serves two types of curry mee rebranded as laksas at his outlets. The Nyonya Laksa is the purest form of the instant noodles, using the whole packet’s ingredients including non-dairy creamer. Toppings are limited to tofu puffs, blanched long beans and bean sprouts.

With the Baba Laksa, Soon added his own touch to the bowl of noodles, using his own curry paste. “When I tried it, I found it to be flat, so I added a bit of my curry paste to punch up the flavours.” The noodles are served with cockles, prawns, sotong and the same vegetables from the Nyonya Laksa.

Moreover, he thinks the instant noodle phenomenon is a passing trend that will see another new hot thing replace its popularity soon.

But from the looks of things and how quickly the noodles are flying off the supermarket shelves, it may be a while yet. 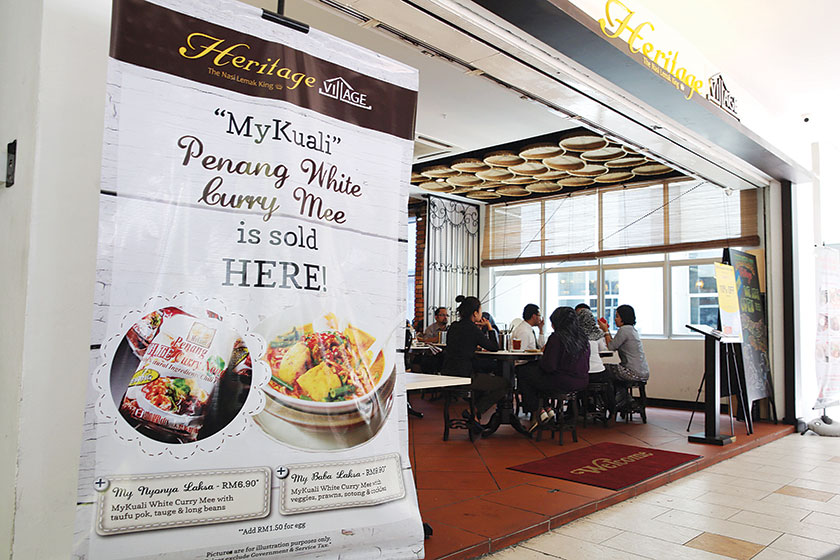 Yes, you can try the myKuali Penang white curry mee at Heritage Village

This story was first published in Crave in the print edition of The Malay Mail on February 21, 2014.