Taking a crack at building a house for Malaysian comedy

The same passion for stand-up comedy leads (from left) Rizal Van Geyzel, Jonathan Atherton and Shanker Santhiram to a 'serendipitous' partnership. — pictures by Saw Siow Feng
Follow us on Instagram, subscribe to our Telegram channel and browser alerts for the latest news you need to know.
By JOSEPH SIPALAN

KUALA LUMPUR, Sept 21 — It's an unassuming space, sparsely populated by a few tables and some chairs, and a bar counter dressed in funky tiles not unlike the colourful descriptions of an acid trip from the 70s.

While not exactly spartan — three large graffiti murals draw the eye across the walls of the first-floor shoplot — there is no mistaking the focus of the Crackhouse Comedy Club: a small and slightly elevated stage with a solitary microphone stand.

“It's a performers' room. It doesn't look like one... there's the broken bridge and no strings, but it's still a Stradivarius,” said Jonathan Atherton, co-owner and one of its two resident stand-up comedians.

The club officially opened its doors in May, offering what business partner Shanker Santhiram describes as the "de-facto setting" for Malaysian comedians.

“In the last three months, we've never had a night where we had to go 'who's going on tonight?'” said Shanker, whose day job entails corporate training and consultancy.

But how exactly did the club — which is possibly the first-ever in South-east Asia exclusively for stand-up comedy — get off the ground?

“Providence and serendipity,” says Atherton, who got to know Shanker when they met at a comedy show in Singapore late last year.

The timing couldn't have been better for the Aussie stand-up comedy veteran, who was in the midst of developing the idea with fellow comedian and eventual business partner, Rizal Van Geyzel.

“Who's going to do it if we don't? Even if someone else does it, they'll probably do it wrong and damage what is a very fragile and growing market,” said Atherton.

“We thought, 'let's just do it right.’ That's why we concentrated on the comedy, well and truly above anything else.” Jonathan Atherton sees potential for a permanent 'house' for Malaysian comedy to grow.

Rizal, who just only last year took the plunge to do stand-up comedy full time, admitted that he and many local comics had worried about people getting bored of their shows.

But the up-and-coming funny man — touted by some as the next big name in Malaysian stand-up — realised after half a decade performing at "borrowed" venues around the city, that people can't get bored of something they have never seen.

“We discovered more and more waves of people who have never sat through a single stand-up show, let alone a comedy club,” he said. 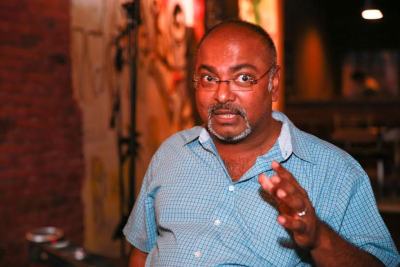 Shanker Santhiram thinks Malaysian comedy has matured in the past few years.

And not only does having a “permanent” club make stand-up comedy more accessible to the masses, but it also provides a place for Malaysian comedy to grow, Atherton added.

The lanky comedian said it was ridiculous for venue owners and promoters to leverage on the desperation of performers, like in the United States where amateurs need to bring five people who buy two drinks each before they can even get three minutes on stage.

“It's like making the waiters bring customers or getting your nurse to push someone off their bike to get the orthopaedic surgeon more customers.

Shanker noted that Malaysian comedy has evolved in recent years, especially in the past six years when Malaysia experienced significant political and social upheaval.

“Everyone laughed at racial jokes, so long as you covered all the main races... but now it's more hot and topical. Jokes now are not just anti-government, now it's anti- everything,” he said. 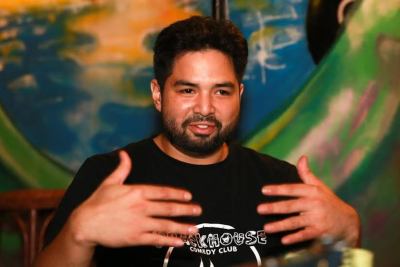 There are still many Malaysians who have yet to experience stand-up comedy for themselves, says Rizal Van Geyzel.

Atherton said this is where the cultural divide is bridged by the many things and experiences Malaysians share as a society.

“When you have a Chinese make jokes about a bunch of ‘machas’ and a whole group of South Indians laugh their heads off at it, it's because beneath the stereotype there is a kernel of truth that we can relate to... the jokes are coming from knowledge and shared experience, not just stereotype and ignorance. It's racial, but not racist,” he said.

The three founders, of course, said they would love for the club to start making money, but are happy if it can simply continue to exist as a no-frills place for comedy to grow.

“We're like Cuba. We don't have anything but we don't owe anything... At no point did we consider this a money-making venture. The more money we make, the more we'll spend on bigger acts,” said Atherton.

“As a Malaysian, it’s such a relief to be able to go up and say whatever you want and make it part of entertainment… I can't say why, but I know it's much needed by the Malaysian people,” Rizal added.