Frenemies in government: BN and PN

Thursday, 24 Mar 2022 8:52 AM MYT By Praba Ganesan
Follow us on Instagram, subscribe to our Telegram channel and browser alerts for the latest news you need to know.
By Praba Ganesan

MARCH 24 — It is not discussed enough. The uneasy peace.

How both Barisan Nasional (BN) and Perikatan Nasional (PN) leaders in the Ismail Sabri Yaakob Cabinet keep a straight face when they face each other in Cabinet meetings.

The past fortnight, Umno won big in Johor and had a festive general assembly where they did not invite all friends in government. Meanwhile, PN got zapped good in the south without a riposte since.

Surely one side is laughing and the other bereft.

At the start, when they gathered to upend Pakatan Harapan in February 2020, it imagined itself the nucleus of a new super-Malay coalition. PAS was over the moon about this possibility, having been courted by both Umno and Bersatu.

The dream died. Today, two coalitions form a government together. 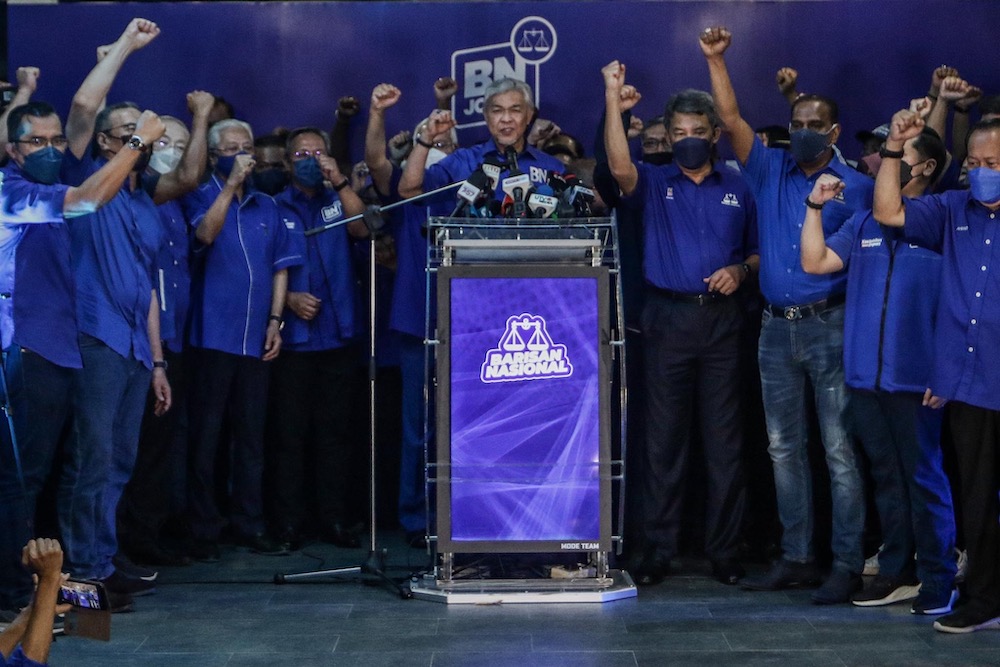 Whatever pretensions of friendship in the Sabah election in September 2020 gave way in drips and shaped full at the Melaka election in November 2021. Three months later, the sides did not even pretend to discuss co-operation for Johor.

The writing is on the wall. By the day, it's certain one coalition is on the up and will form a government and the other facing the exit door.

The end appears nigh for PN.

And though a PN defeat affects Bersatu, PAS and Gerakan, the damage is not equally distributed.

Dark Blue Moon, does not work

Fifty years ago, PAS joined to form BN as a platform to reinforce Malay power after a shock election result — 1969 — threatened a socialist resurgence (read Chinese). Abdul Razak Hussein’s plea for togetherness to cut off the usurpers was an easy sell.

Umno and PAS shared one happy general election in 1974. Then the marriage crumbled.

By 1978 PAS severed ties with Umno; however, infiltrators had done their job.

The formula — remember it — come together to defeat race mixers and agitators; enjoy time in Cabinet and envoy posts; and when purpose is served, a weaker PAS gets kicked out.

History repeats itself is not a cliché in this episode.

At this rate, PAS won’t be in government after the general election and if not careful, risks losing Kelantan or Terengganu or both.

The party will probably look for new leadership if the prognosis comes true.

Bersatu has one government in Sabah even if they lose a general. However, it will not be a stepping stone to a new start.

The worst kept secret — ask Warisan and Parti Bersatu Sabah — is the Sabah government is different from the federal government, allegiances shift rapidly over there.

Which then leads the puzzle back to Semenanjung.

Muhyiddin Yassin was a long-term Johor MB and the subdued performance in Johor spells disaster. This comes after Melaka, in politics it is wise to read the signs.

Further, neither the northern, central nor eastern regions promise more for Bersatu. Those are either PAS or Pakatan country. Plus, Pejuang will kick Bersatu in the teeth in Kedah, Perlis and northern Perak, even if they end up without wins. Despite their abysmal show in Johor — losing all deposit monies — they have reach in those regions.

The result might indicate Bersatu needs PAS rather than the other way around to win some seats, and that is not how a right-wing Malay party leads a coalition.

History — that annoyance again — shows any similar competitor to Umno gives up if whipped in a general election.

What does the future hold for Bersatu leaders in defeat? A lot.

Bersatu leaders are an acting troupe more than community leaders. If the general election goes too south, they can start again in Umno, Pejuang and if big enough a name there’s always PKR.

How can they just change colours as if the past did not exist?

By reverting to the playbook.

Election results and previous altercations can be papered over by reminding about the common enemy: the unseen others set to destroy Malay unity if Malay leaders are not united.

This is also the reason Pejuang’s riffraff can also return to Umno eventually.

It would be a monster question at pub quizzes, who is Gerakan’s president?

Dominic Lau and the party are on borrowed time. The party has carried on for ten years too long and an election is unnecessary to underline the complete anonymity of the party in Malaysian consciousness.

They hold on to a sliver of hope by being in the federal government, for now.

While DAP takes a lot of brickbats, their standing in Penang is only challenged by Umno. While Pakatan Harapan’s fortunes dip, DAP can carry enough on its own, or at worst fail to form a majority with Umno second.

Either way, Gerakan is not in the fray. If Gerakan collapses in Penang, then it crashes harder elsewhere.

This could be Gerakan’s last general election.

Shot down in no-one’s corral

While they all stare down the barrel of a gun, only one currency remains for the three: time.

The government still is helmed by an Umno vice-president and not president, and therefore Ismail Sabri cannot help but hesitate.

It was the Bersatu led government which elevated him to senior minister before being promoted to prime minister. And PN can be a counterweight to his president Zahid Hamidi pressing him to call for a general election. Though the leverage weakens when PN struggles.

A year longer as PM is better than not when BN wins, Ismail Sabri probably muses. More so, after seeing the late MB change after election day in Johor.

As they say, a week is a long time in politics. Perhaps if this circus goes past Malaysia Day, those on the ropes might regroup. It is a big might. And the might becomes a maybe if 2022 concludes without a general election.

This is PN’s only throw of the dice for now. Even that might not be enough.