Thursday, 17 Mar 2022 8:26 AM MYT By Praba Ganesan
Follow us on Instagram, subscribe to our Telegram channel and browser alerts for the latest news you need to know.
By Praba Ganesan

MARCH 17 — In 2018, when Anwar Ibrahim walked out of prison his party dominated national politics. Its president then was deputy prime minister, accompanied by scores of ministers in Cabinet, key government positions and seats on GLC boards — every good news acted as corrosive acid burning through a comatose Umno.

While doors kept flinging open, Anwar was only interested in one, the one to the prime minister’s office. However, a familiar nemesis stood in the way. It was déjà vu on ketum.

Still, Anwar was in a rush. No time to reinforce the party apparatus, lay the foundation for decades of PKR presence at the top of Malaysian politics, and maybe do some governing.

Those boring bits were — and still remain — distractions to Anwar. Team Anwar inched closer to a reckoning, to claim top spot via its MP count inside Pakatan Harapan’s parliamentary majority. A slow annoying chokehold around ruling Bersatu.

Until of course in an unparalleled act of political suicide to spite an old enemy, Mahathir Mohamad stepped down.

The drama is four years old. It has worn down a whole country, even competing with a pandemic lockdown for attention.

Today, PKR is a shadow of itself. In Opposition and out of ideas. No party in modern times across the world after a rise to the top collapsed so badly, so quickly.

Almost a month ago, this column stipulated:

If…Pakatan loses in Johor and PKR buried, how can he (Anwar) in good conscience defend his leadership?

After they counted the votes on March 12, PKR left with one assemblyman in the chamber of 56. A party demolished. There is no debate to adjudicate out of pity for the slain bodies.

The second advice from the column should scare Pakatan fans.

If a Johor debacle is not met by a wholesale change… Pakatan may invariably end with a general election result it cannot recover from in the next decade. 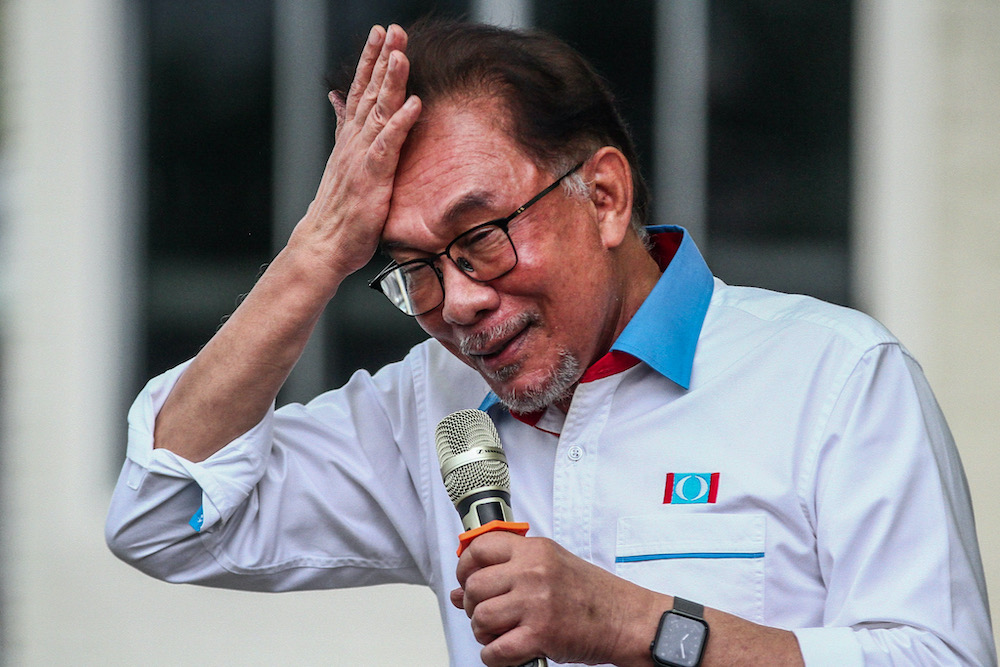 Anwar must end this madness by taking a bow and leaving the stage. Which is unlikely.

This leads to the more pertinent question, who will stand up and ask him to depart?

This puzzle infuriates and all PKR members — including this columnist — are forced to own the predicament. How can a party and its leaders of all sizes and dresses end up beholden to its only ever supreme leader above all of its members? One man’s ambition dwarfing the party’s dreams for the country is hubris personified.

This did not happen overnight. However, it must be resolved now, or the party joins the graveyard of parties past — Semangat46 of the 1990s to Independence of Malaya Party of the 1950s.

Anwar has an incomparable belief in his destiny, which borders on the fantastical. He won’t go unless asked to. The interest of 32 million Malaysians seems secondary in his decision matrix.

Navigate the PKR website for a voice to oppose Anwar openly, and nothing pops up.

Outsiders are probably unaware of the various key exits over disagreements with Anwar long before the 2020 Sheraton Move. Granted, Azmin Ali was the most powerful party man ever to leave, the number of those who left with him is testament to his strength.

The perpetual speculation of who else are set to cross over to Azmin is a testament of the depth of reach he continues to have in the party.

Who is left in the fray to raise a storm?

The next most senior leader by votes is Nurul Izzah Anwar. As a daughter, she is no Regan and the Cordelia in her won’t oppose Anwar’s King Lear. Won’t happen. This is a splendid time for the vice-president to consider her obligation to family, party and the rakyat who count on her.

She has served since a teenager — and Malaysia should thank her — but leadership of principles is not about easy choices. Even when it comes to family.

Next in influence by virtue of appointment is Rafizi Ramli. An Anwar die-hard. He now wants to be deputy president to prop the Dear Leader up. The same role Anwar’s political secretary Farhash Wafa Salvador Rizal Mubarak seeks. Two fanboys pit themselves in battle, both interested to help and not shove Anwar out of the way. The outcome in many ways won’t change a thing.

The rest in that leadership chart are middling characters. Many highly capable with impeccable work ethics but they are neither charismatic nor natural rebels. They’ve been around long enough inside Anwar’s circle because of these attributes.

If PKR falls even lower, the relevance of Pakatan relies on DAP only. In this toxic climate and DAP’s innate inability to cope with actual multiculturalism, Pakatan will only be a lightning rod for abuse.

In short, the end of PKR forces Pakatan’s demise.

The general election, likelier in July than later, may return Umno not only to the top but also fill it with an air of impregnability in the minds of everyday Malaysians.

The time to buy time with studies and further meetings to evaluate the studies are over. If PKR wants Malaysians to be braver and to consider new options for the country, then maybe it can begin by exhibiting the asked bravery. What is braver than to ask the inspiration behind the party to step aside for the future of the country and party?

Yet, it is a crying shame. While Anwar lounges in the power corridor recollecting episodes in too colourful a life, he aims at how yet Malaysians can enjoy his leadership rather than try to consolidate his contributions to build his legacy narrative.

But a country cannot be fed by sentimentality or an economy saved by old glory stories. Anwar’s time is over. Someone inside the party needs to find the decency to show him the door.