Umno stays ahead only to be rudderless

Thursday, 20 Jan 2022 6:57 AM MYT By Praba Ganesan
Follow us on Instagram, subscribe to our Telegram channel and browser alerts for the latest news you need to know.
By Praba Ganesan

JANUARY 20 — If Malaysia votes today, an ecstatic Umno will gleefully march to win. Even though coalition Barisan Nasional (BN) will probably lack a simple parliamentary majority after counting votes they can choose friends to help with the shortfall.

Umno then concedes “power and positions” to select partners — PAS, Gabungan Parti-Parti Sarawak (GPS) and if must, also Bersatu — to form a government, but not necessarily with Ismail Sabri Yaakob as PM.

Why would a party widely pilloried have the best chance to triumph? Its opponents are in disarray and momentum — thanks to continuous election wins since Pakatan Harapan’s disintegration — remains with it.

Dishevelled, certainly, but in a first past the post (FPTP) system, they’d pip ahead of all others in the race to 112 seats.

At a time of political instability, such advantage is gold.

But why is Umno in a state of great uncertainty?

Two reasons. For the first time since Umno was in government, its president is not prime minister. When authority is vested in one person, distinctions are blurred. 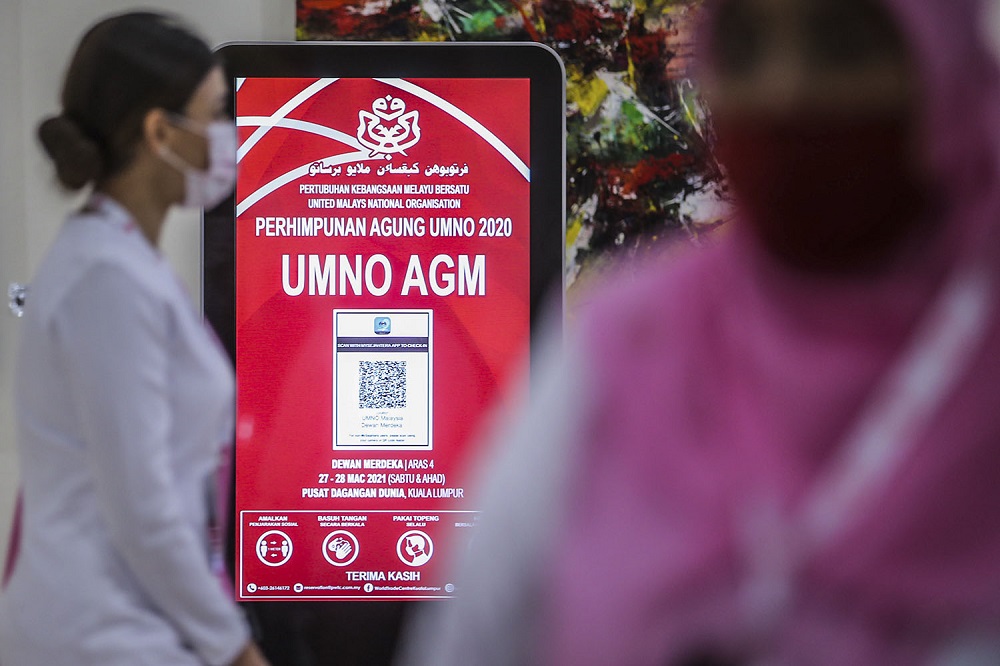 Umno’s system was carefully reared over time to not possess balance. Imbalance to allow the PM all the required space to lead all to success.

Of course, it has no remedy if the PM is the problem as was the case with Najib Razak and 1MDB. Umno wholeheartedly — no matter how foolishly — believes competition creates unwelcome tension.

The other reason being Umno’s three-year term of office from its 2018 June elections is over. The Registrar of Societies (RoS) ultimately reports to a home minister who reports to the Umno prime minister. Yes, more circles.

President Ahmad Zahid Hamidi prefers a postponement to after the general election, while Deputy President Mohamad Hasan (Tok Mat) prefers sooner. In December 2021, Tok Mat said probably November 2022, which means the branches convene and vote by July, which is five months away.

Every week of inaction — no measures to realise this election — brightens Zahid’s chances of weathering through any insurrection before the general election.

If he remains in charge by virtue of no party polls, he then decides the Umno candidates for the GE. He’d unlikely refuse Ismail Sabri (Bera) or Tok Mat (Rembau) seats, but he can pepper the list — more so in the winnable seats — with his men and deny his competitors’ supporters.

In case Umno wins, the palace would summon the leader of the party rather than the sitting PM. If it is a resounding win, Zahid won’t need to bother about how his deputy or party vice-president feels about the matter.

At the previous party election in 2018, Umno initiated a reformed voting system.

Branch leaders vote at their divisions for local and national leadership. Zahid only emerged with 39,197 votes (42 per cent) ahead of Health Minister Khairy Jamaluddin’s 32,592 (35 per cent). Perennial candidate, Tengku Razaleigh Hamzah was spoiler with 20,462 (22 per cent).

If the party election was forced this year, who would be squaring up?

Zahid did not trot to victory four years ago. His support since can only have dipped. He may end up with the ignominy of finishing last in a three-way fight with his deputy and the prime minister.

Without a state or federal position, Tok Mat must challenge or retire from politics. The latter is very unlikely.

Ismail Sabri has no option. To choose not to contest for the top post is a statement on how the leader of Malaysia sees himself. In 2018, despite being freshly booted out of government Ismail Sabri secured 74,680 (81 per cent) of Umno voters who supported him as one of their three choices for VP.

That’s impressive, even if heavyweights like Hishammuddin Hussein and Najib Razak opted out from contesting, and others were weighing their opportunities to bolt for Bersatu.

Ismail Sabri is an out and out Umno man but does that inspire members as much as the more statesman-like Tok Mat?

To murk it further, Bersatu — the ex who never leaves — has ties at every level of the Umno machinery and can easily affect the outcome. Bad news for Zahid, suspense for Tok Mat and joy for Ismail Sabri who stays an ally of the other president, Muhyiddin Yassin.

The question on which comes first, party or parliamentary polls probably inflicts a toll on leaders. All secondary leaders have one eye on party position while not wanting to upset the party president in case a general election occurs.

Ultimately, a case of party-wide bipolarity.

Singing the PM's praises, thanking party solidarity under Zahid and appreciating the future vision under Tok Mat. Slightly wagering on one over the others with every news cycle.

And there is a possibility if all three cannot rise enough above the noise, for either or both Najib and Kuli to present themselves as bluebloods to offer experience and stability for the children at the table.

To be saviours, who are not in short supply.

In short, Umno has so much going for it electorally without any chance of real stability in the years to come. For this remarkable situation one must thank Pakatan and friends for their persistent insipid performance.

With either situation — party then national, or national before party — there will be enough unknowns, rifts and skulduggery to bar Umno from doing more than to sustain federal power. To have the bridge of an aimless ship while the rest on board feud.

How we got to this point is academic conjecture. That the intrigue can only build, that’s what’s making this into a thriller.