Time to tell your uncle to stop forwarding things on Facebook

Wednesday, 10 Mar 2021 8:01 AM MYT By Erna Mahyuni
Follow us on Instagram, subscribe to our Telegram channel and browser alerts for the latest news you need to know.
By Erna Mahyuni

MARCH 10 — Social media has always been a cesspit of unsolicited opinions and problematic comments but the Harry-Meghan interview with Oprah Winfrey seems to have brought out the worst in many people, including Malaysians.

I had no intention of following the interview as I didn’t care much about the British royals but scrolling through Facebook, the odd comment on articles would inadvertently catch my notice.

All of them, I am not exaggerating, were awful. These were grown adults, commenting using their real names, unashamedly using puerile language and saying unreservedly awful things about perfect strangers.

What is it about celebrities that somehow makes people think they can get away with saying things about them they would not say to someone’s face? 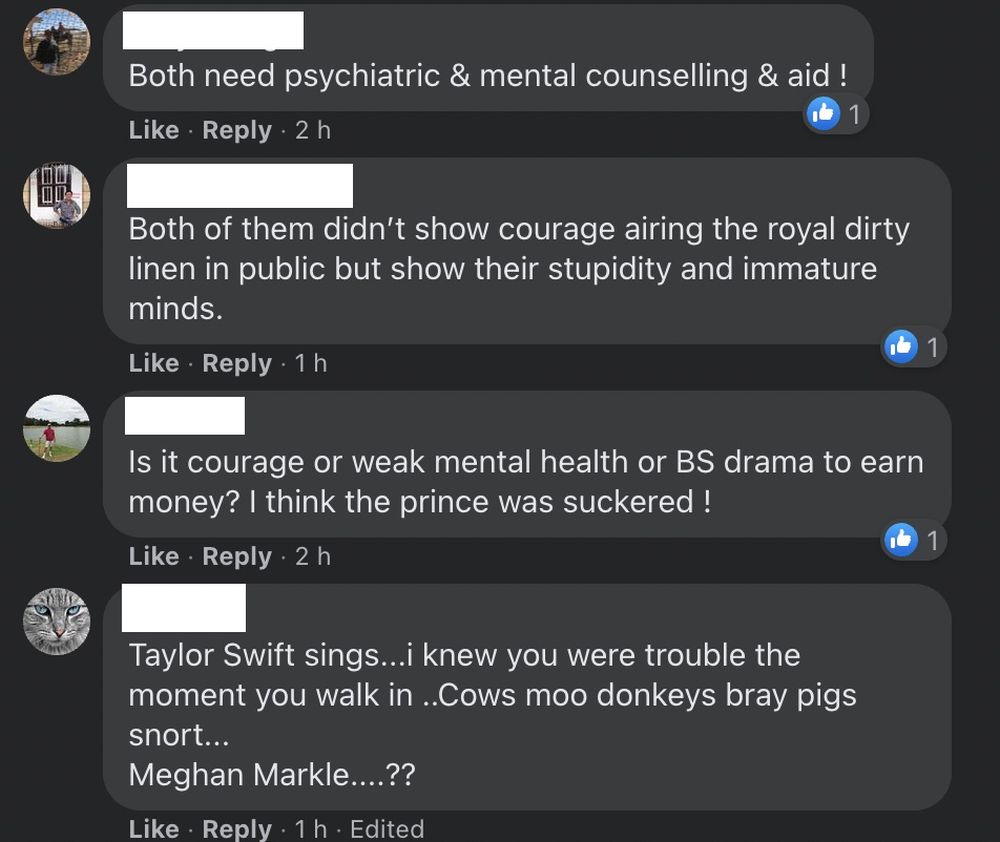 Why do Malaysians willingly cast aside civility and basic humanity when commenting online, even under their real names? — Facebook screenshot

My own code of behaviour is that I will not say anything online that I would not repeat to someone’s face; which makes it a good thing I do not hang around in political circles.

Is it not possible to be civil online? Is there some sort of medal being given out to who can come across the coarsest, who can say the foulest rudest things?

It came to a head for me yesterday when someone left a comment on my friend’s wall, likening Meghan to being a “secondhand set” and beginning her sentence with “not to be nasty but.”

These comments should not be tolerated. Free speech is one thing, but how is it “free speech” to say vile, nasty things? I told off the person, who happened to be a middle-aged auntie with three daughters, and fortunately she did not attempt to defend her terrible screed.

Yet I fear that the internet age has opened a Pandora’s box for people to say all the nasty thoughts they had never dared to voice in polite company.

When a woman gleefully mocks another for being a divorcee, the world needs fixing. — Facebook screenshot

If you can’t persuade your particularly foulmouthed relatives, perhaps remind them that in Malaysia, they can get in trouble just for sharing Facebook posts.

Just last December a man was charged for sharing a post that said there were too many “dummy police officers.”

Oddly selective prosecution aside, perhaps it might be just enough warning to get the people you know to be a lot more judicious when it comes to how they express themselves online.