OCTOBER 27 ― Chess has always been very important in the Netherlands and this is undoubtedly due to Dr Max Euwe who not only became their one and only World Champion in 1935 but was a famed chess theoretician whose extensive writings created what has essentially become a “Dutch school of chess.”

Since then their top players have enjoyed exceptional support in the country's quest to once again have a world champion. Today that top player is 22-year-old Anish Giri who is a migrant of Nepalese-Russian descent.

But the closest they have had to a genuine challenger since Euwe was former World No. 3 Jan Timman in the 80s and 90s who had to compete alongside a wonderful generation of exceptional talent in the era of Soviet Union giants Anatoly Karpov and then Garry Kasparov.

The Hoogeveen Chess Tournament is one of the many traditional chess events the Netherlands is known for and this year, alongside the Open, there were two very interesting matches as well as two amateur tournaments.

Indian players nowadays make up typically 15 per cent of the entries in major Open tournaments worldwide and they turned up in force at Hoogeveen. Their defending champion, the former World Junior Champion Abhijeet Gupta, impressively repeated last year's triumph to make history as the first back-to-back winner.

All the attention was, however, focused on the two matches where in a battle of generations of the Netherlands, veteran Ivan Sokolov played new national champion 17-year-old Jorden van Forrest and England's Nigel Short took on China's Women's World Champion Hou Yifan in an apparent battle of the sexes.

It was a validation of the match format with the right players as Sokolov and van Foreest were a sight to behold with both players going after each other with uncompromising attacking play and exchanging wins till round five after which the fighting draw in the sixth game ensured a narrow win 3.5-2.5 for the older man.

Short had told me before his match that he expected it to be very difficult but it certainly did not seem that way as he cleverly used his experience to blunt Hou's play and by the time he drew his fifth round game, the match was already won on the back of two fine wins.

But that's where the controversy that eventually followed began with a requirement to play the sixth and meaningless game.

In most matches, once won, it is usually halted and if there is a requirement to continue play for some reason i.e. because tickets were sold, then it switches to exhibition mode and often rapid games are played instead.

But today's chess is all about ratings and that is calculated based on a formula which shows the likely outcome and after comparing that to the actual result, the rating change is given.

Winning two games against an opponent with a similar rating means a big gain for Short and so he checked what the FIDE rating regulations were to confirm if indeed he had to take it seriously. The FIDE Rating Regulations read in paragraph 6.5 that: “Where a match is over a specific number of games, those played after one player has won shall not be rated.”

To be sure, Short checked with Tournament Director Loek van Wely, who as a former Netherlands No. 1, has vast experience in top level chess. After some email exchanges and a talk over breakfast, van Wely said he would refer it to the arbiters at a meeting that same morning for a decision.

Worst was to follow as Short went into the sixth game with no reply from van Wely despite repeatedly asking. Hou, meanwhile, was blissfully unaware of what was going on but soon there was more for Short to be upset about as one arbiter felt it appropriate to tell Short, during actual play, that he was a chicken!

Hou salvaged some pride with a fine win to reduce the final score to just 3.5-2.5 in Short's favour. Without taking anything away from the excellent play of the Women's World Champion in that game, it is hard to believe that the Englishman was as focused as he normally would have been.

The arbiters had illegally decided to ignore this FIDE regulation by arguing there was a precedent two years ago when the organisers had faced this exact same issue and had successfully ignored it! It is clear that they have submitted all games for ratings but very sensibly FIDE has rejected it as can be seen here.

Maybe it is best to let Short provide context through the series of Twitter replies below:

What was even more shocking has been the reaction of Loek who has been actively making statements while going on social media to essentially troll and attack Short's airing of his unhappiness, and a lot of what he is saying is rather ill-advised and quite unbecoming for the organisers as can be seen from just this one example. 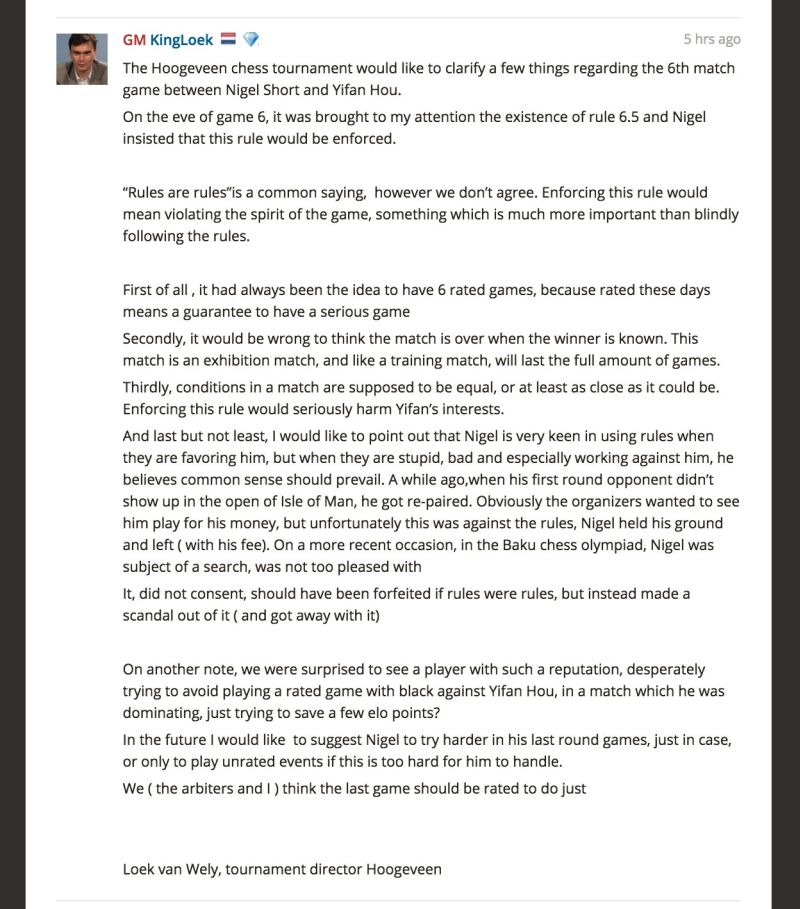 This unnecessary incident and subsequent reaction ― a major mistake by either arrogant or incompetent arbiters ― is just one of too many recently in the news and reflects the challenges that chess is facing today in the way arbiters are trained, certified and awarded titles (and even re-certified) has not kept up with the explosion of chess worldwide.

Firstly, too many arbiters are not professional in that it is not their main job or vocation.

I have already said before that whether we like it or not, a minimum playing strength with requisitive tournament practice has to be one prerequisite to be an arbiter at top level events but it seems this is not always enough as in this case where a Tournament Director is either badly advised or unable to keep his personal feelings in check.

Secondly, the whole FIDE Arbiter System needs a rethink and then possibly a serious revamp because to start with, after passing a seminar with minimum marks, one can become an International Arbiter quickly by getting norms from just attending tournaments where basically all one did was pick up scoresheets and adjust clocks.

All too often, the wannabe arbiter is not getting any real practical training but it is rare a Chief Arbiter will not sign off a title norm of someone who has helped out with this grunt work!

The division of arbiters into various categories from A to D is also flawed in that it is based on participation in FIDE events where too often the appointments are political.

Thirdly, while the quality of arbiters has dropped and with that also their quality of interpretation, the FIDE Laws of Chess being applied has at the same time become unnecessarily complex so as to compensate for a lack of logic together with a real understanding of the underlying and basic principles.

And it becomes even worst when one appreciates that there are also rules regulating various competitions, numerous tournament systems and tie-breaks, and ratings and titles. Even when it is a matter of pressing importance such as the challenge of cheating using electronic devices, measures taken are ad-hoc and not well thought through.

Rules are rules; if they are bad or not working well, then they need to be changed.

But when the rules in place are ignored, and not because it is a matter of a conflict with that of natural justice or even if simply to ensure fair play, but just because you can, then I think we have a very serious problem on our hands.