Sunday, 12 Apr 2015 7:00 AM MYT By Devi Asmarani
Follow us on Instagram, subscribe to our Telegram channel and browser alerts for the latest news you need to know.
By Devi Asmarani

APRIL 12 — Indonesia’s ruling party, the Indonesian Democratic Party of Struggle (PDI-P), has shown yet again that it has not been able to outgrow its matriarch Megawati Soekarnoputri.

During its national congress in Bali this week, PDI-P re-elected the former president as its chairman for the fourth time, strengthening her grip on the party. The congress also turned into an awkward event to remind party cadre President Joko Widodo that he was merely an extension of his party.

In her speech after her unanimous re-election, Megawati warned Jokowi, who attended the event but was not given time to speak, against breaking the party line, which she said was consistent with what the public wants.

She cited her experience of being “stabbed in the back” and accused “free riders” — non-PDI-P members — for attempting to distance Jokowi’s administration from his own party. While these “opportunists” had never done the dirty work of building the party, they waited for a chance to undermine it, she said.

She did not name them, but previous statements made by PDI-P politicians point at three people in Jokowi’s administration: Cabinet Secretary Andi Widjajanto, State-Owned Enterprises Minister Rini Soemarno, and the President’s Chief of Staff Luhut Panjaitan.

This is not the first time Megawati gave an acerbic public address to strike at some unnamed enemies or traitors, while playing victim at the same time. But her speech to show Jokowi who’s the boss revealed the deepening cracks in the relationship between the President and the party that nominated him. In fact, this has appeared to start shortly after he announced his Cabinet line-up.

In October after his inauguration, the President appointed six party cadres, including Megawati’s daughter Puan Maharani. But his appointments of some people linked to the party, including Rini, who was once known as Megawati’s close confidante, had apparently not been green lighted by her.

Two months ago, Jokowi’s decision not to appoint a controversial police general as the national police chief further angered his party, which supported the general’s nomination. In a public meeting in February, Indonesian media reported that the two did not appear to speak to each other, although they sat next to each other. 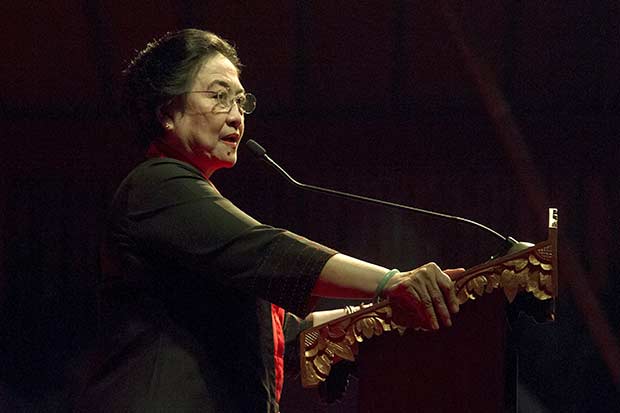 At the congress in Bali, Jokowi played down Megawati’s speech, saying he had been communicating well with the party, and its legislators in the House of Representatives. But already he has indicated that he might evaluate his Cabinet following criticism it wasn’t doing well.

Though by no means this is a sign that he is following her order — and while it is true that some of his Cabinet ministers are not performing — any drastic move such as reshuffling would understandably be linked to the dynamic of his relationship with the PDI-P. In short, it will convince the public that he is a mere party stooge.

More than anything, however, Megawati’s imperious address shows her own determination to keep the party belonging to her, her family and those who are loyal to her. She still has a strong popular following, particularly in the rural areas of central and eastern Java, where her bloodline as the daughter of founding President Sukarno, engenders impassioned support for her especially among older generation.

She is not unique to this. Many political parties in Indonesia thrive or decline depending on the figureof their founders or leaders, such as former president Susilo Bambang Yudhoyono’s Democratic Party, retired general Wiranto’s Hanura, and Prabowo Subianto’s Gerindra party.

PDI-P began as a splintered faction of the Indonesian Democratic Party (PDI) in the early 1990s. After the 1998 reforms, it became a legitimate political party, contesting and winning the 1999 election on the strength of Megawati’s popularity as an opposition figure to the fallen New Order regime.

Megawati replaced then-president Abdurrahman Wahid as his deputy after his impeachment in 2001, but she lost the subsequent two presidential elections since. PDIP has also lost two elections since 1999, but last year it won the most votes, banking on the popularity of Jokowi, who was expected to be nominated for president by the party.

Political analysts have criticised PDI-P for lacking a good recruitment system and for failing to pass party stewardship to its younger and more promising cadres.

In fact, on Friday Megawati announced the new make-up of the party leadership comprising old names in key positions, including some who have been tied to or named suspects in a number of corruption cases. Younger names include her daughter Puan and her son Prananda Prabowo.

Ironically, just the night before the announcement, the Corruption Eradication Commission (KPK) arrested PDI-P legislator Adriansyah at the hotel where the congress participants were staying, after he was caught red-handed accepting a bribe from a businessman. The bribe, in a sealed envelope containing was given to secure a mining permit in South Kalimantan, Adriansyah’s electoral district.

PDI-P was quick to distance itself from him and said he would be fired from the party, but it has not helped the image of a party that has been under a lot of criticism for failing to reform itself.

Megawati is undoubtedly a unifying factor in PDI-P, which has seen internal rifts causing breakaways in the past. But her gripping leadership that leaves little room for a more democratic dynamic will also threaten the survival and the relevancy of the party, especially after she leaves the scene.